The recently rediscovered Cicindelidia floridana (Miami Tiger Beetle) may have been the highlight of my 48-hour early August blitz through Florida, but it was by no means the only Florida-endemic that I hoped to find during the trip.  In fact, the day before I saw C. floridana I found the species it was formerly considered a subspecies of, C. scabrosa (Scabrous Tiger Beetle), itself an almost Florida-endemic (its distribution extends just north of the border into extreme southeastern Georgia).  I had word that I might find the species in sand pine scrub habitat along the Gulf Coast around Lower Suwanee National Wildlife Refuge and Cedar Key Scrub State Preserve (Levy Co.).  This area lies very near yet another locality (where I was hoping to find yet another Florida-endemic), further justifying my decision to travel several hours north the day before I was to retrace my route back to the south and then continue on down to Naples to meet up with Dave Brzoska and Chris Wirth for the trip to Miami to see C. floridana.

Cicindelidia scabrosa is one of four small, sand-dwelling species with red venters collectively referred to as the abdominalis-species group (Brzoska et al. 2011).  The nominate species, C. abdominalis (Eastern Pinebarrens Tiger Beetle), is the most widespread member of the group, occurring across the Southeastern U.S. Coastal Plain from Maryland and New Jersey to Louisiana (Pearson et al. 2006).  The three remaining species are Florida-endemics (C. floridana and C. highlandensis—Highlands Tiger Beetle) or near endemic (C. scabrosa), presumably evolving during the Pleistocene Epoch (1.8 million to 10,000 years ago) at a time when fluctuating sea levels repeatedly isolated peninsular Florida from the mainland.  I found both C. abdominalis and C. highlandensis during my 2009 trip, so finding C. floridana and C. scabrosa on this trip means that I have now seen all four members of the abdominalis-species group. 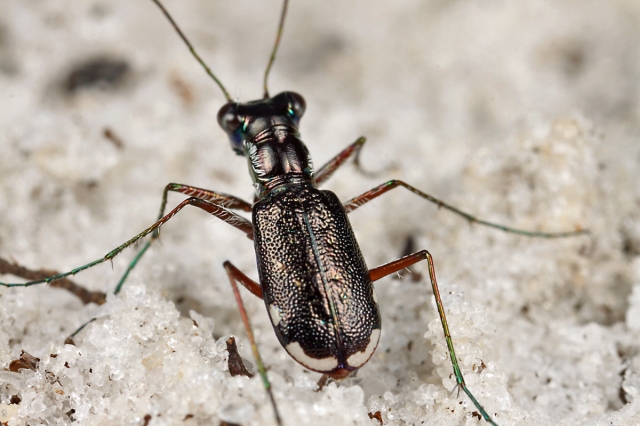 There is little doubt about the distinctiveness of C. scabrosa compared to C. abdominalis and C. highlandensis, as neither of the latter two species exhibit the distinctly scabrous elytra or rows of flattened setae on the sides of the pronotum exhibited by C. scabrosa.  The distinction of C. scabrosa from C. floridana, however, is more subtle—C. scabrosa is shiny black and always exhibits a post median marginal spot anterior to the apical lunule, while C. floridana is shiny green and usually lacks the post median marginal spot.  In addition, the legs of C. floridana are somewhat lighter in coloration than those of C. scabrosa.  The difference in coloration is subtle in preserved specimens but obvious in living individuals.  After seeing the C. scabrosa in the field one day and C. floridana the next, my first thought regarding the latter was, “Wow, that’s different!”—a result of the brilliant coppery highlights that are quite evident in living individuals but apparently fade in preserved specimens. 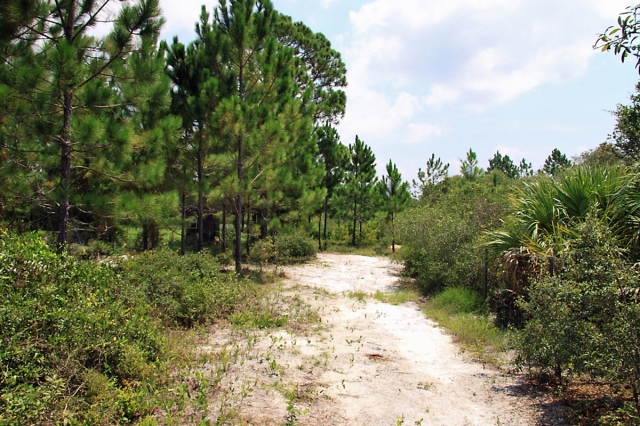 The distinction between C. scabrosa and C. floridana is not limited to subtle morphological characters—included also are differences in habitat, distribution, and seasonal occurrence.  Cicindelidia scabrosa occurs broadly across the Florida peninsula in sand pine scrub, a xeromorphic plant community featuring an open canopy of sand pine (Pinus clausa) growing on well-drained, infertile, sandy soils (Brzoska et al. 2011).  The species is absent, however, from much of south Florida where the wet areas of the Everglades limit availability of suitable habitat.  Cicindelidia floridana, on the other hand, is restricted to a small area of Miami-Dade County and parts of the Keys where pine rockland habitat, a savanna-like forest of Florida slash pine (Pinus elliotti var. densa) and scrub understory, can be found growing on limestone outcrops.  The photos in this post were taken on an open 2-track through sand pine scrub near Cedar Key Scrub State Preserve.  Occurring here in asscociation with C. scabrosa was another (almost) Florida-endemic tiger beetle, Ellipsoptera hirtilabris (Moustached Tiger Beetle), which I have also seen in association with C. abdominalis and C. highlandensis (but not C. floridana).

It is perhaps redundant for me to state that it was extraordinarily hot while I photographed these beetles.  Temperatures were already approaching 90°F when I found the first individuals, and by mid-day when they finally disappeared it was nearly 100°F.  Add to that the mid-summer Florida humidity, and I was about as soaked as I ever get. It’s a photographer’s nightmare—trying to protect expensive gear while scrumming through the sand and sweating profusely, all the while still trying to get the perfect shot!  The beetles were smart enough to call it a day at 12:30 p.m., and I must say I didn’t mind having to get into an air-conditioned car, chug a quart of ice-cold Gatorade, and spend the next several hours not broiling under the hot Florida sun while making the long drive south.