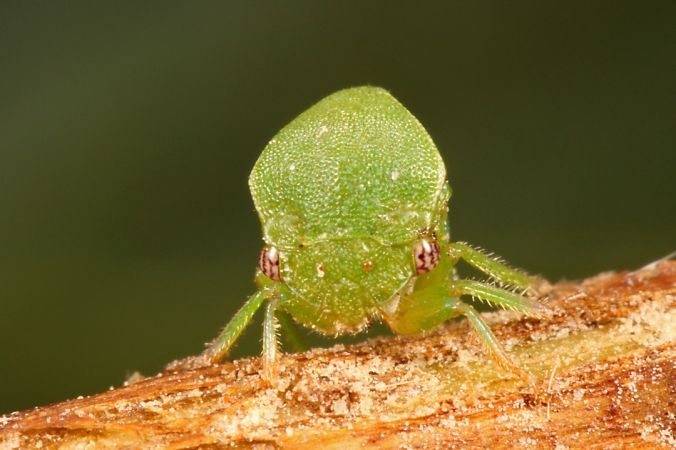 Spissistilus festinus (three-cornered alfalfa hopper) is one of the few truly economic pests in the otherwise bizarre and innocuous family Membracidae (treehoppers).  Its common name alludes to one of the crops it affects, but my encounters with this species are most often in soybean (I am, after all, a soybean entomologist).  Damage in this crop is caused by both adults and nymphs, whose piercing/sucking mouthparts cause girdling and breakage of the stem—often just a few inches above the soil.  This individual was seen during my travels last week in a soybean field in Stoneville, Mississippi, where numbers throughout the season were especially high this year.  Although I have seen innumerable S. festinus adults, I have never noticed their crazy, zig-zag patterned red and white eyes until I managed this closeup face shot (click on photo for best view).

This slightly cropped photo was taken with a 100mm macro lens and full extension tube set, resulting in slightly more than 2X magnification.  One of the lessons I took from BugShot 2011 was the need to pay more attention to background and value contrast.  By placing the subject a few inches in front of the dark green soybean foliage I was able to achieve a much more pleasing background than the typical black background one gets with full flash photos at high magnification.  Although both the subject and the background are green, there is still sufficient difference in shade to create contrast between them.  Light-green is one of the more difficult colors to work with when full flash is used with high shutter speeds and small apertures to maximize crispness and detail (in this case, 1/250 sec and f/16).  However, increasing ISO to 400 and lowering flash exposure compensation to -2/3 can reduce the amount of flash needed to illuminate the subject with such settings, making it easier to achieve a properly exposed and true-colored subject.