With a planted area approaching 20 million hectares, soybean has become Argentina’s most important agricultural crop.  Most of the planted area is located within the so-called “Humid Pampas” region of central Argentina (Buenos Aires, Córdoba, Santa Fe and Entre Rios Provinces), but the crop continues to expand in the northestern part of the country as well (Chaco, Tucumán and Salta Provinces).  More than any other crop in Argentina (except perhaps cotton), soybean is attacked by a tremendous diversity of insects.  The most important of these are the defoliating Lepidoptera, primarily species in the family Noctuidae.  Anticarsia gemmatalis (velvetbean caterpillar) is the most consistent and widespread defoliator, but an increasingly important species in Argentina is Rachiplusia nu (“oruga medidora del girasol,” or sunflower looper). 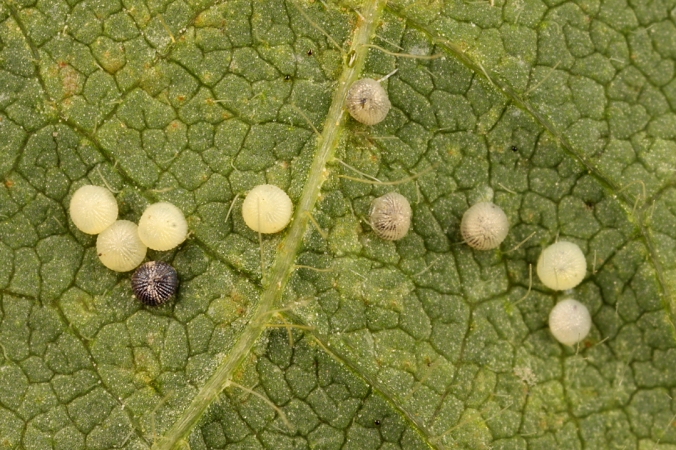 Eggs are laid primarily on the undersides of leaves

Rachiplusia nu belongs to the noctuid subfamily Plusiinae, the larvae of which can be recognized by having three pairs of prolegs and the “looping” manner by which they walk.  Chrysodeixis includens¹ (soybean looper), much better known because of its status as a major pest of soybean in the southeastern United States (and of growing importance in Brazil as well), also belongs to this group, and in fact the larvae of the two species are quite similar in appearance.  While R. nu is the primary plusiine species affecting soybean in Argentina, C. includens has appeared with increased frequency on soybean in Argentina in recent years, primarily in the more northern, subtropical growing regions adjacent to those areas in Brazil where it is now a major pest of the crop.

¹ Although still widely referred to in the literature as Pseudoplusia includens, the genus Pseudoplusia was synonymized under Chrysodeixis some eight years ago by Goater et al. (2003).  More recently the synonymy was accepted and formally applied to the North American fauna by Lafontaine and Schmidt (2010).

Despite their similarity of appearance, larvae of the two species can be rather conclusively distinguished by the shape of their spinneret (Angulo and Weigert 1975).  This is not a very convenient character for use in the field, however, leading to misidentifications in areas where the two species co-occur.  This is not an insignificant problem, as the two species exhibit differing susceptibilities to pesticides labeled for their control (C. includens especially having become resistant to a number of pesticides).  The result is control failures and subsequent application of even more pesticides in an effort by farmers to protect their crops.  While not as conclusive as the shape of the spinneret, in my experience R. nu larvae (at least older larvae) tend to have a darker, smoky-blue cast to the color (compared to the bright yellow-green of C. includens) and rather distinct patches of tiny black asperites on the thoracic ventors that are not apparent in C. includens. 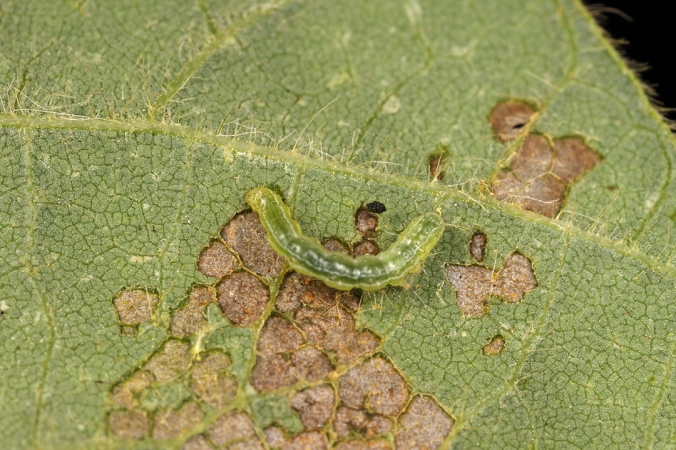 Younger larvae consume only the lower surface between veins, resulting in ''window paning''

As the common name implies, soybean is not the only crop attacked by R. nu.  Early season infestations tend to occur in alfalfa and flax, after which the populations spread to soybean and sunflower.  The latter crop especially is heavily attacked by this insect, primarily in the drier western regions in Córdoba Province.  Dry conditions seem to favor an increase in the populations of this species, while moist conditions promote increased incidence of pathogenic fungi that are very effective at suppressing R. nu larval populations.

Like many defoliating lepidopterans, eggs tend to be laid on the undersides of leaves, where the larvae begin feeding after they hatch.  Young larvae consume only the lower epidermal layer of the foliage between the veins, leading to an appearance in the foliage called “window paning”.  As they larvae grow they begin consuming the entire tissue layer but still preferentially avoid vascular tissue, resulting in a skeletonized appearance to the foliage.  A single larvae can consume more than 100 cm² of soybean foliage, which translates to several trifoliates.  As a result, it doesn’t take many larvae to cause significant loss of foliage on the plant.  Soybean has the ability to compensate for loss of foliage due to increased photosynthesis in lower foliage exposed by feeding in the upper part of the plant, but losses exceeding around 15% during the later reproductive stages of plant growth are enough to significantly reduce yields (and it is during these reproductive stages of growth that R. nu infestations tend to occur). 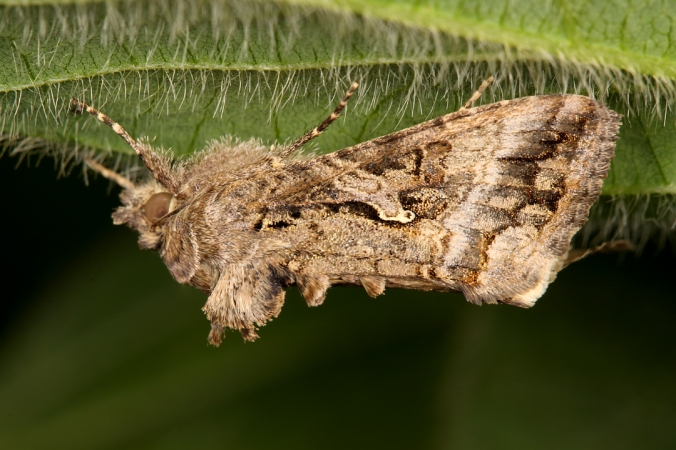 Rachiplusia nu is the most widely distributed of three South American species in the genus, occurring in Argentina, Bolivia, Brazil, Chili, Paraguay, Peru and Uruguay, while a fourth species, R. ou, is widely distributed throughout North and Central America (Barbut 2008).  Unlike R. nu, its North American counterpart R. ou has not gained status as a pest of soybean or other crops.

In a BitB Challenge first, nobody was able to correctly ID the larva of this species beyond the level of subfamily.  This, despite the huge Argentina hint bomb that I dropped when I posted the challenge and my well-known vocation as a soybean entomologist.  I figured the answer would be forthcoming as quickly as one could Google the search phrase “Argentina soybean Plusiinae” (which, in fact, shows the following except for the very first result “Pseudoplusia includens is the most common soybean Plusiinae in the Americas (Herzog, 1980). Rachiplusia nu in southern Brazil, Uruguay and Argentina, and…” [emphasis mine]). Most participants guessed, predictably, soybean looper, while only a few were fooled into guessing Geometridae (the true loopers, and distinguished by having only two pairs of prolegs).  As a result, I’m not declaring a winner for ID Challenge #14, although the appropriate points will still be awarded (when I get around to assigning them, that is.  Hey, I’m working in Argentina right now—it was enough for me just to get this post out!).