Although western sand dune endemics were the top goals on my cicindelophilic wish list during last fall’s Annual Tiger Beetle Trip, I started the trip by leaving St. Louis in the most unlikeliest of directions—south! No, I wasn’t trying to get to Denver without having to drive the tedious stretch of I-70 through Kansas. Rather, I wanted to take advantage of the chance to witness active adults of the Missouri/Arkansas disjunct population of Cicindelidia obsoleta vulturina (prairie tiger beetle)—perhaps my favorite of all tiger beetle species—on the sandstone glades near Calico Rock in north-central Arkansas. Widely disjunct from the main population’s eastern limit of distribution in central Texas, I’ve seen them at many locations in the White River Hills of southwestern Missouri and adjacent Arkansas over the past ten years, but never in the area around Calico Rock where they are best known from the state. I already had precise localities where I knew I could see them, as I had found 3rd-instar larvae earlier in the year (some of which had already emerged as adults), so I wanted see them and document the range of variability exhibited by adults at this southeasternmost known extent of the disjunct population’s distribution.

Although the adults were not quite as numerous as I have found them at certain sites in Missouri, I had no trouble finding them once I got to the area where I had collected the larvae this past June. While showing Steve Spomer our Missouri population last year, he commented that our Missouri adults seemed much less flighty than adults he had seen at Calico Rock. I must say that I agree with him, as I found the adults much more difficult to photograph than those in Missouri. To be honest, I had to stalk nearly ten individuals before the male in the photo above finally allowed me to get close to him. When adults are numerous this is not a problem, but in this case every failed attempt required several more minutes of searching for the next subject. Eventually, however, I got my mojo and started having success with the photographs.

Unlike true spring-fall species, mating occurs in fall instead of spring.

In the main population, and like other members of the genus Cicindelidia, adults are active during the summer months and exhibit the classic “summer” species life history. The Missouri/Arkansas disjunct population, however, shows a phenologic shift in adult activity to the cooler fall months—perhaps in response to the generally droughty conditions that prevail during the summer in this part of the country followed by rains during late summer and into fall. (This is one reason why I think this population may be deserving of separate subspecific status.) In this regard they appear to be “spring-fall” species, but their life history does not match true members of that group, which emerge during fall as sexually immature adults, hibernate during winter, and re-emerge during spring for mating and oviposition. Thus, one never sees adults of classic spring-fall species like Cicindela limbalis mating during the fall. In contrast, adults of this disjunct population emerge, mate, and lay eggs all during the fall before the onset of winter, then they’re done. The eggs hatch during fall and require another season or two to reach 3rd-instar and pupate during the summer for fall emergence.

Coloration likely functions in crypsis, as shown by this individual nestled in amongst moss and lichens.

When viewed as prepared specimens in a cabinet, C. obsoleta and its subspecies are among the most conspicuous of species due to their large size (in Missouri and Arkansas only Tetracha virginica is larger), olive green coloration, and bold white maculations. More than likely, however, the combination of color and markings serve a crypsis function in their native habitat. This is clearly evident with the individual in the above photograph, who had retreated to a moss- and lichen-covered rock crevice in his efforts to evade my lens. Squint your eyes a little bit, and he almost disappears! It must be similar for visually based predators such as birds and lizards. 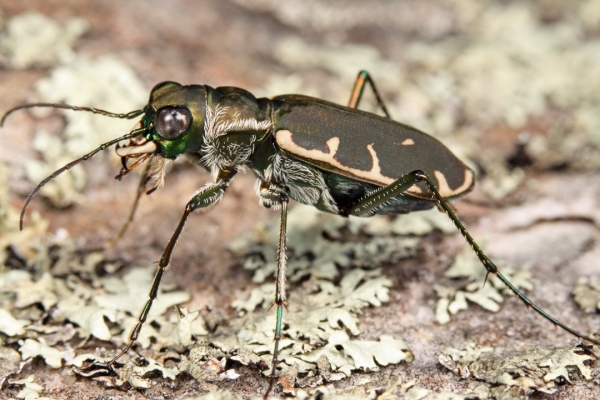 On more open ground and from a lower angle, the beetle is much more visible.

This same individual, however, becomes quite visible when chased onto more open rock surfaces (and viewed more laterally than from above). It is common to see individuals out in the open such as this, but more often than not when alarmed they fly or run to less exposed areas, relying on their cryptic coloration to avoid detection. In fact, when I follow beetles that have evaded me to the spot where I am sure they must have landed, I often fail to see them even though I am looking almost exactly in the area where they are sitting until they start to crawl and their movement catches my attention.

A rather greenish individual tries to hide amongst lichens and shortleaf pine duff.

I have observed a great deal of variability in coloration and maculation at locations in Missouri, with individuals ranging from bright green to dull olive-green to dark green and even brown, and the markings ranging from complete to interrupted. I saw a similar amount of variability in the Calico Rock population, with the exception of brownish (which I have only seen at the northernmost localities in Missouri) and fully maculated individuals. Most of the Calico Rock individuals were dull olive-green, but the female in the above photo (trying to evade my attentions by hiding amongst lichens and pine duff) was as bright a green as I’ve seen in any individual. 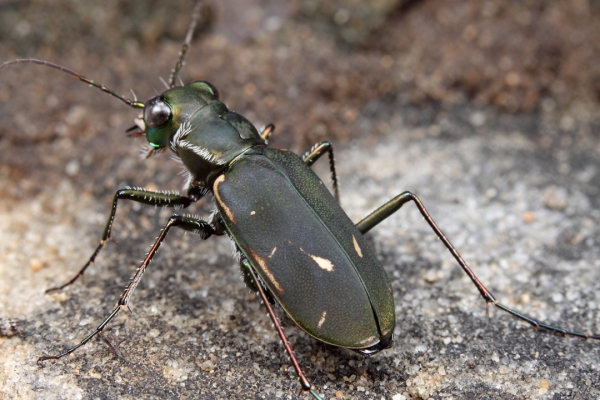 As mentioned above, I didn’t seen any individuals that I would consider fully maculated, and several that I saw were more weakly maculated than any I’ve seen in Missouri. The female in the photograph above was the most weakly-marked individual that I saw, with the lateral and median bands greatly interruped—the latter nearly reduced to small discal spots.

While I did not see brownish individuals as I have seen at the northernmost localities in Missouri, I did see the occasional blackish individual—the one in the above photograph also exhibiting about the greatest degree of macular development that I observed among the adults seen. My impression now is that there are clinal patterns to the coloration and macular development in this disjunct population, with markings tending to be more developed in northern localities. With the specimens collected from this and the many other locations throughout the disjunct population’s range that I have now sampled, a more critical assessment of variability in this population may now be possible.

It has become standard practice for me to photograph tiger beetle habitats whenever I can. However, I’ve become interested recently in trying to understand how tiger beetles perceive their own habitats. While this isn’t possible to know precisely, ground level photographs can provide at least a clue into seeing the world from a beetle’s eye. I almost find this perspective of the glade habitat more interesting than the human perspective shown in the first photograph. 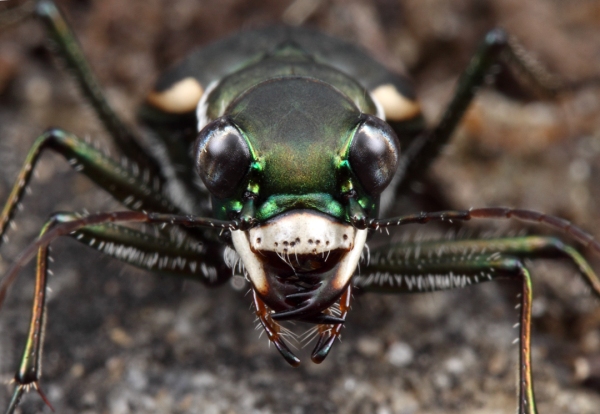 The last sight that their prey sees.

There can be little doubt about what the beetles themselves look like from the perspective of their prey. The photograph above may not properly represent the image generated by an insect’s collective ommatidia, but it certainly must be just as frightening!

17 Responses to Return to Calico Rock