Every five years or so I find myself facing the same dilemma—too many bugs and not enough space to keep them. Each time this occurs, I go through the same thought process trying to decide the best way to solve the problem. Do I create new space by buying new cabinets, or clear existing space by donating “excess” material? If money was no object it would be the former. However, money is an object—a new, premium 25-drawer cabinet costs more than $1,000, not to mention another $400 for the drawers to fill it (if I build them myself—3 times that amount if I buy them already made). In my younger, more care-free days I got away with plunking down this kind of money several times, eventually assembling my current battery of three half-size and three full-size cabinets holding a total of 111 Cornell drawers fully stocked with unit trays. These days, however, there are kids to feed and college costs looming on the horizon. I just can’t swing that kind of dough.

The alternative, however—donating away part of my collection, is equally unattractive. I’ve been collecting insects for most of my life, so it’s more than just a hobby—it’s a part of me. Nevertheless, I am able to draw a distinction between a working collection and a hobby collection, and for the most part mine is the former. I have a few “hobby” taxa like treehoppers and leaf beetles and such, and I’ve already made a number of donations from these groups over the years. However, the bulk of my collection—and hence drawer space—is taken up by just three taxa; jewel beetles, longhorned beetles, and tiger beetles. Not only are my research activities in these three groups ongoing, but a considerable amount of the material in these groups consists of voucher specimens for my publications. I just can’t think about divesting myself of material in these groups, at least not at this point in my life. Besides, pulling material for donation is, in itself, a long and very time-consuming process that I would not look forward to.

I’ve actually been debating my options for the past couple of years now, watching nervously as my inventory of specimens housed in temporary cardboard boxes started to balloon from the successes of the past several years of collecting. Temporary boxes are bad—not only is it impossible to integrate the specimens into the organization of the main collection, but they remain vulnerable to that dreaded pest of insect collectors around the world; DERMESTID BEETLES! (The one beetle I don’t like!) The likelihood of having specimens damaged by dermestids is directly proportional to the number of temporary boxes that must be checked periodically looking for any evidence of their presence. I’ve been hit by dermestids more than once, and with the number of temporary boxes that I currently have (more than 50) it has become almost impossible to monitor them frequently enough. 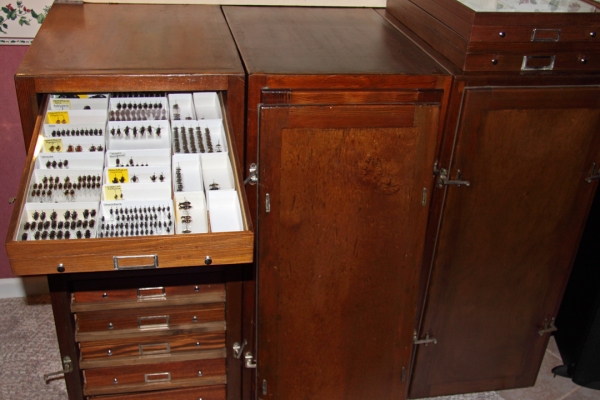 Of course, patience is a virtue, and my reward this time for not acting too rashly came in the form of an email sent to the members of our local entomology group by Mark Deering, Director of the Sophia M. Sachs Butterfly House just a few blocks from my office. Mark was an avid butterfly collector in the past but has divested much of his collection in recent years and, as a result, no longer needed the cabinets and drawers he was using to store his collection. The list of items he had for sale included a few Cornell cabinets with drawers, ostensibly perfect for my needs, but it was the last item in the list that caught my eye—several antique, hand-made, wooden, 10-drawer cabinets with drawers. Now, I love my Cornell cabinets—they provide state-of-the-art (albeit industrial-looking) protection for my collection. However, there is something appealing about hand-made, wooden insect cabinets. I can almost see John L. LeConte and George W. Horn themselves standing next to one and pulling a drawer to have a look at its contents. I quickly contacted Mark and made arrangements to look at the cabinets. Mark explained that they were part of a 40-cabinet set housing a collection of pierid butterflies that eventually found its way to the Smithsonian Institution… yes, the Smithsonian (such history!). He had gotten ahold of seven cabinets and was now selling them for a very reasonable price. The cabinets were gorgeous, and it didn’t take long for me to do the math; I could afford to buy three cabinets with drawers for a fraction of what a 25-drawer Cornell cabinet with drawers would cost. That’s 30 drawers total, each with almost as much space as a Cornell drawer.

Drawer 1 of my tiger beetle collection.

I picked up the cabinets a few days later and spent the next two days rearranging furniture in my ‘museum’ to create the perfect showcase spot, cleaning the glass on each drawer (both sides), and transferring my tiger beetle collection into the first cabinet (drawer 1 of which is shown at right). Despite their age several transfers of ownership, the finish is still in very good shape with only minor nicks and scratches that add a sense of history yet don’t detract from their attractiveness. Especially pleasing was the discovery that the Cornell unit trays I use for my collection fit almost perfectly in the drawers (just an annoying empty spot in the upper right corner—this can probably be fitted with a California Academy-sized unit tray, perhaps for holding insect repellent blocks since the drawers and cabinets are not as air-tight as my modern Cornell cabinets). I’ll probably move the rest of my “hobby” taxa into the remaining drawers to free up the Cornell cabinets completely for exclusive use in housing my Buprestidae and Cerambycidae. That will take some time, but it’s a good problem to have. My only fear is that after I move things around and incorporate all of my backlogged material, I will have once again used up all of the newly available drawer space and find myself facing that same dilemma that I face every five years or so!

Perhaps a little teaser is in order—one of the species in the drawer shown at right will be the subject of an upcoming post—can you guess which one? Also, 2 BitB Challenge points to anyone who can correctly identify the country shown in the map behind the drawer.