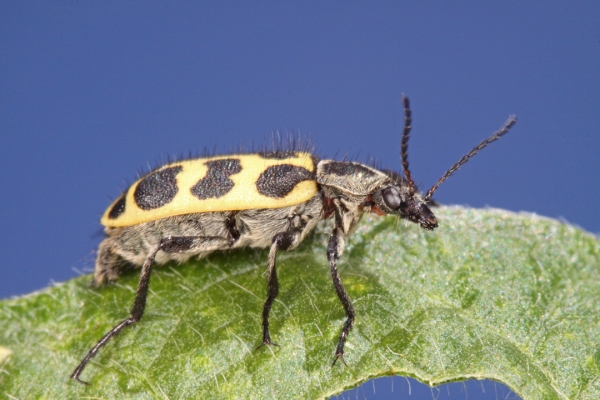 I don’t know if this is truly the case, but Astylus atromaculatus (family Melyridae) is one of only a few beetles in the country that actually has two Spanish common names—”astylus moteado” and “siete de oro” (meaning “spotted astylus” and “seven of gold”, both names referring to black splotches on the elytra). It is also the only beetle that I’ve seen everywhere I’ve been in the country—north and south, soybean fields and cornfields, countryside and city. I have yet to visit a soybean field where I don’t see them, perhaps nibbling on a leaf here and there but mostly just mating, and they can be downright overwhelming in cornfields (see this post with photos of the adults dripping from corn tassels, literally!). For all their ubiquity, however, their economic impact seems more nuisance than substantive. Corn breeders complain about interference during tasseling, and larval feeding on seeds during or just after germination seems to be on the rise due to increased use of conservation tillage, but overall this species seems to be more bark than bite.

6 thoughts on “The most common beetle in Argentina”