While most leaf beetles (family Chrysomelidae) are found associated with herbaceous plant species, many members of the subfamily Hispinae—which includes leaf mining beetles and tortoise beetles—are found on the foliage of woody plants. In North America the most distinctive of tortoise beetles found on trees is the palmetto tortoise beetle, Hemisphaerota cyanea. These distinctive dark blue, hemispherical-shaped (hence, the genus name) beetles with yellow antennae are found in the deep southeastern U.S. on the fronds of saw palmetto, Serenoa repens, and other native and introduced palms. I found the beetles in these photographs near Cedar Key Scrub State Preserve in Levy Co., Florida while searching white sand 2-tracks through sand scrub habitat for the Florida-endemic Cicindelidia scabrosa (Scabrous Tiger Beetle). 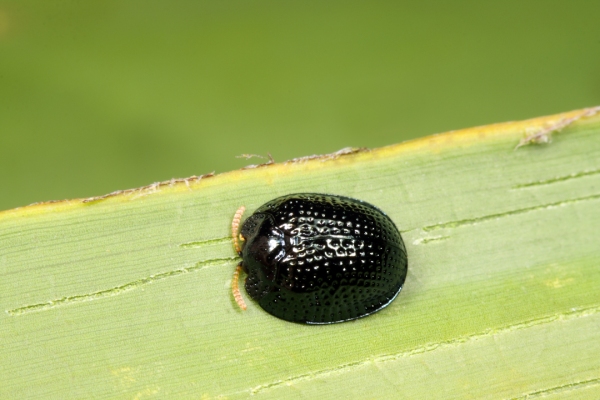 I first saw this species during my first insect collecting trip to Florida back in 1986. I didn’t know much then (other than that I really, really enjoyed traveling to different parts of the county to collect insects!). I was in Everglades National Park (with a permit) when I first noticed them dotting saw palmetto fronds. I think I had actually noticed them for some time but thought they were some type of scale insect before eventually realizing it was actually not only a beetle, but a tortoise beetle (one of the many groups of insects in which I was interested during those early, formative days). 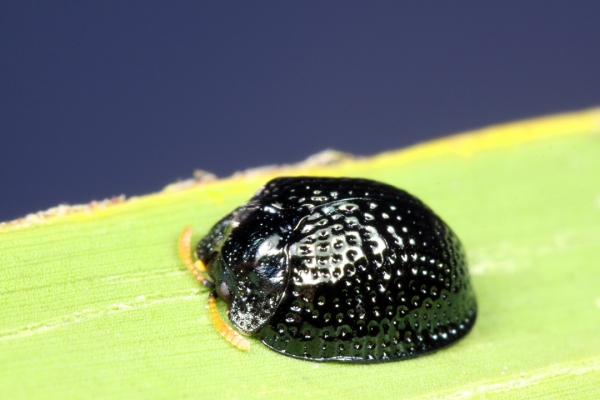 Specially modified tarsi and a hemispherical shape allow the beetle to clamp itself tightly against the leaf to repel attack by ants and other insect predators.

I also remember being struck by how difficult it was to pry the adults off of the leaves on which they were sitting. It turns out that these leaf beetles have specially modified tarsi with thousands of bristles tipped with adhesive pads on the undersides. Normally only a few of the pads contact the leaf surface, but when the beetle is threatened it clamps all of them against the leaf and secretes an oil that strengthens the adhesive capabilities of the pads. Thus secured, the beetle clamps its hemispherical-shaped body down tightly against the leaf and is able to resist the efforts of ants and other predators to pry it from the leaf.