In my post Very wary tigers!, I spoke of the frustrations of trying to photograph tiger beetles when conditions of temperature and terrain conspire to make them too wary to approach. This is a common feature of tiger beetle photography in general, but the problem seems to reach its zenith with the “wet sand beach” species—most species inhabiting these habitats tend to be “summer species” active during the hottest part of the season, and their habitats tend to be virtually devoid of any vegetative cover that can be used to the photographer’s advantage. A blazing sun on hot, open sand is not conducive to photographing anything! Still I try, and on that particular day I did manage a few relatively distant photographs of two species, Cicindela repanda (Bronzed Tiger Beetle) and C. hirticollis shelfordi (Shelford’s Hairy-necked Tiger Beetle) but none at all of a third species that was present on the beach, Ellipsoptera cuprascens (Coppery Tiger Beetle). 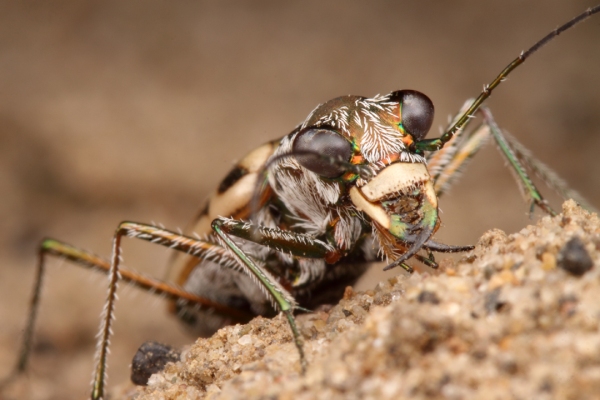 Well, there is always more than one way to skin a cat (or a tiger), and as can be seen in these photographs I took a different approach to that latter species that allowed me to obtain several quite decent photographs of both males and females. Not long after that frustrating day at Cape Rock Park, I found myself again in southeastern Missouri with an opportunity to do some night collecting. It may not be widely known, but certain species of tiger beetles are also active at night and can actually be attracted to ultraviolet (UV) lights. This is particularly true of species in the genus Ellipsoptera, which as a group seem to depend almost exclusively on coastal and fluviatile sand habitats. I have used UV lights in the past to attract nocturnally active species of tiger beetles for photography (see Return to Nowhere), and since I had seen E. cuprascens a few years ago at Steward Towhead in New Madrid County I thought this might be a good spot to try again for photographs of that species.

“Might be a good spot” turns out to be quite the understatement, as I have never seen E. cuprascens in such numbers as I did that night! Seeing the species common at the sheet guarantees that individuals will also be found milling around on the ground in the immediate vicinity of the sheet, and unlike during the heat of the day when their bodies shift to thermal overdrive, adults at night are much easier to approach due to the cooler temperatures and the distraction of abundant, easily captured prey sitting transfixed in their UV light-induced stupor. Of course, night photography brings its own set of challenges, primarily (for me) the need to use the camera flash head lamps for focusing—I often find myself repeatedly aborting a shot because the lamps turned off automatically before I had a chance to find the subject and compose the shot to my satisfaction. Still, this is a minor inconvenience compared to the exasperation of subjects blasting across the hot sand when your approach comes within 12 feet! 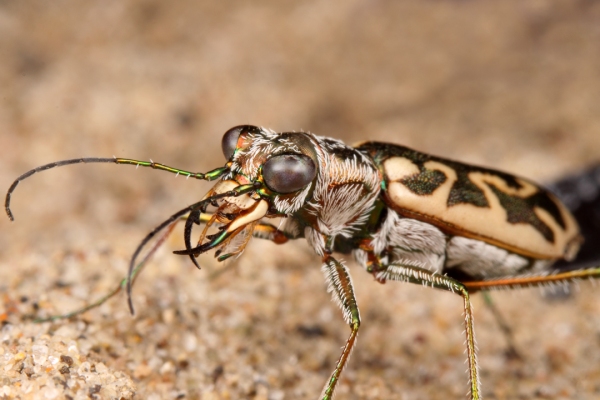 Males mandibles are modified for grasping the female pronotum during mating.

Ellipsoptera cuprascens is very closely related to E. macra (Sandy Stream Tiger Beetle—see The last tiger beetle), which it resembles greatly and whose ranges overlap here in Missouri (although the latter is far less commonly encountered than the former). The photos in this post show the relatively coarser and denser punctures on the elytra that distinguish E. cuprascens from E. macra, as well as their somewhat shinier surface and distinctly more coppery color. The rounded elytral apices of the female (middle photo) also serve to distinguish the species from E. macra, in which species the elytra of the females come to a point at the suture (Pearson et al. 2006). Note also the sexual dimorphism in the labrum and mandibles of the female (first photo) and male (last photo), with the mandibles relatively longer and slightly curved and the labrum shorter in the latter. Presumably this is related to the use of the mandibles by the males in grasping the female pronotum during mating—the longer, curved mandibles are shaped to precisely fit the contour of the female’s pronotum, while the shorter labrum allows the mandibles to gain better purchase farther down on the side of the female’s pronotum (Pearson and Vogler 2001).