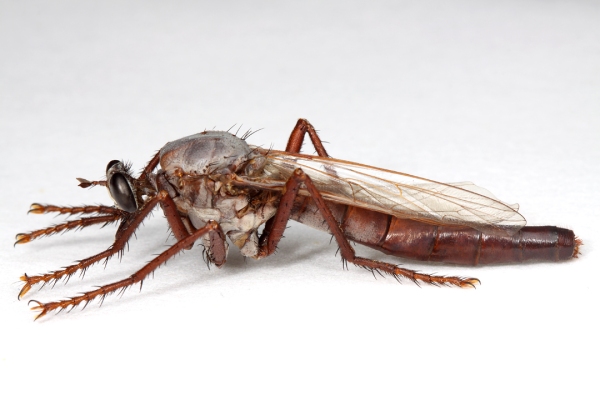 A couple of years ago during the initial testing of my DIY diffuser, I pulled a selection of rather impressive insects from my collection and photographed them on a white background to see how effectively the diffuser worked with different types and sizes of insects. I posted some of those photos for the larger insects in the following weeks, including the tank-like eastern Hercules beetle, the frightful-looking stag beetle, and the downright evil-looking red-eyed devil. There were, however, a number of smaller insects that I had also photographed but whose photos never made it onto these pages as a flush of new photography began the following spring. This is one of them: the robber fly, Microstylum galactodes (order Diptera, family Asilidae). I collected this specimen nearly 20 years ago in western Texas, and until the last few years it was the largest robber fly I had ever seen. That honor now goes to the closely related M. morosum (North America’s largest robber fly), which I have seen in northwest Oklahoma and as a previously unreported occurrence in southwestern Missouri. Still, M. galactodes is an impressive beast, and these photographs of the preserved specimen do little justice to its appearance in life. 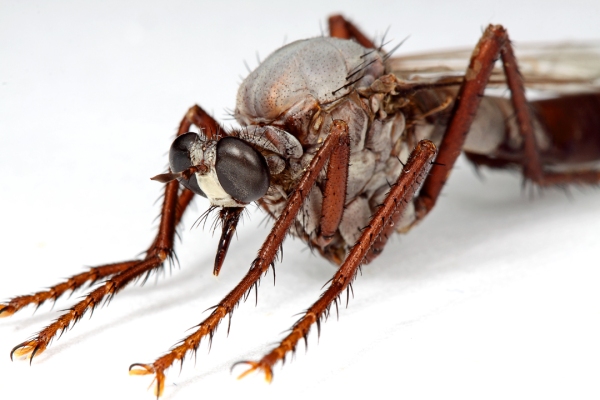 The ”beard” (mystax) of Microstylum is confined to the oral margin and composed of stout bristles.

Both species of Microstylum are distinguished by the mystax (dense moustache of bristles on the face) confined to the oral margin and composed chiefly of stout bristles, but M. galactodes may be separated from its larger cousin by the light-colored wings and even, whitish bloom (powdery covering) covering the head and thoracic dorsum (Back 1909). Despite being the relatively commoner species, M. galactodes seems to be a little more specific in habitat preference, most often found in short grass prairies and scrub lands (Beckemeyer & Carlton 2000). Also, even though both species occur broadly in the southcentral to southwestern U.S., M. galactodes seems to have a slight western shift in its distribution compared to M. morosum, extending north only into the western parts of Oklahoma and Kansas (Beckemeyer & Carlton 2000); while M. morosum occurs across these states and eastward into northwestern Arkansas (Warriner 2004) and southwestern Missouri (MacRae unpublished—gotta get that note submitted!

Back, E. A. 1909. The robberflies of America, north of Mexico, belonging to the subfamilies Leptograstrinae and Dasypogoninae. Transactions of the American Entomological Society 35:137–400.

7 thoughts on “The “Other” Marvelously Monstrous Microstylum”