In mid-August I visited Route 66 State Park along the Meramec River in east-central Missouri to check stands of rosemallow (Hibiscus lasiocarpus) that I had previously noticed growing in the park for the presence of the stunning jewel beetle, Agrilus concinnus. Once considered amongst the rarest members of the genus in North America, this species has in recent years been collected at several localities—always in association with Hibiscus spp. (MacRae 2004). I was disappointed to find the rosemallow stands sparse and stunted—a result of this year’s drought—and there were no A. concinnus to be found. Whether this was a result of the drought or the location or the lateness of the season, I do not know. However, as often happens when I don’t find what I’m looking for, I start seeing things that I’m not looking for. In this case, what I noticed were these incredibly tiny leaf beetles feeding on the foliage of the rosemallow plants.

I’ve collected a fair number of leaf beetles over the years, thus I recognized these immediately as belonging to the subfamily Alticinae (flea beetles) due to the way they jumped when I disturbed them. However, I have also done a fair bit of collecting of insects on rosemallow and never seen (or at least noticed) this species of flea beetle. The beetles were feeding gregariously on mostly the upper surface of the leaves, and their feeding resulted in a rather distinctive damage that caused the more severely affected leaves to shrivel and turn brown. Based on gestalt, I was guessing Crepidodera or Chaetocnema, two genera that contain some of the state’s smallest species of flea beetles.

Based on host plant and this photo on BugGuide, I thought these might represent Chaetocnema quadricollis. However, that species isn’t among the nine species of the genus recorded from Missouri by Riley & Enns (1979, 1982). Nevertheless, Ed Riley himself, and Shawn Clark as well, each confirmed this as the likely identity of the beetles based primarily on its associated host plant, and in fact Riley did record the species from Missouri at numerous localities under the name C. decipiens (later synonymyzed under C. quadricollis by White (1996) in his revision of the genus in North America). Schwarz (1878) described the species from Florida (noting that it has “exactly the same aspect of a small Crepidodera“), and apparently its association with and occasional pest status on rosemallow has long been established (Weiss & Dickerson 1919 recommended Bordeaux or arsenate of lead for its control). 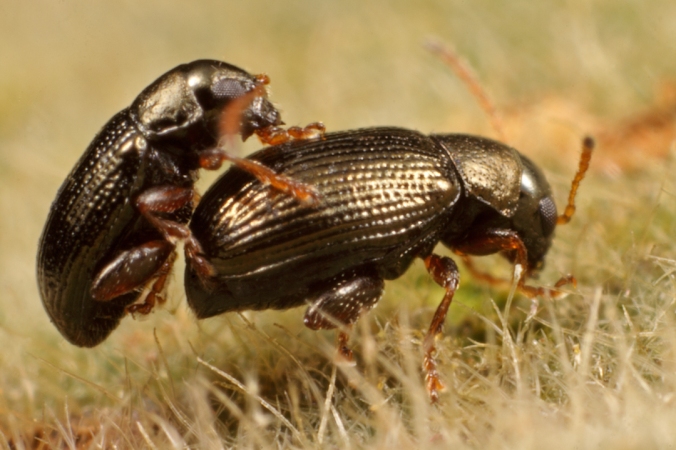 Although coupled, these beetles are not actively mating (is this mate guarding?) (photo @ 8X)

These are probably the smallest beetles that I have photographed so far. In the photo of the mating pair above, the male measures just over 1 mm in length, while the female measures about 1.6 mm in length (the sensor of my camera measures 21 mm wide, so an 8X photo yields a field of view measuring 2.625 mm wide). All of the above photos were taken hand-held in the field with a Canon MP-E 65mm macro lens (1/250 sec, ISO-160, f/14, full flash). The last two photos were taken with the lens mounted on 68 mm of extension tube and fully extended to achieve 8X magnification. While the photos contain good depth-of-field (DOF), they are soft due to the extreme amount of diffraction that occurs at such a small aperture and high magnification. If I were to do it over, I would reduce the aperture to f/10 or even lower and sacrifice some DOF for better sharpness.

White R.E. 1996. A revision of the genus Chaetocnema of America north of Mexico (Coleoptera: Chrysomelidae). Contributions of the American Entomological Institute 29(1): 1–158.