One of the nice things about the study of insects is the endless opportunity for discovery. It could be a new species, or it might just be something already known but not yet seen personally. I’ve been collecting insects most of my life, and although much of it has been done in far away places the bulk has occurred in my home state of Missouri. Despite my long experience in this state, this past summer I had the opportunity to experience collecting within the state in a way that I’ve not yet done before—blacklighting up and down the length of the Mississippi River regularly during the months of July through September. Each time, I would arrive at the selected spot in the early evening while there was still daylight and search the (hopefully sandy) beaches for evidence of several tiger beetle species that might occur in such habitat. Then, as the sky turned aglow from the setting sun, I would setup the blacklights and wait for the appearance of those particular tiger beetles that are attracted to such.

Expectedly, beetles were seen at only some sites, and numbers and diversity generally decreased as summer approached its end. By early September beetles were no longer showing up even though the habitat seemed good (I guess that’s why they call them “summer” species). Still, on this particular night, the lights setup at the Hwy 62 bridge in far southeastern Missouri were attracting a variety of other insects, so I kept them on to see what might come in. I had nothing else to do. At some point, I noticed a strange insect that seemed like a cross between a mayfly and a moth, and then another…and another. Although I had never seen one of these in person before, I knew exactly what they were—male bagworms! Bagworms (order Lepidoptera, family Psychidae), of course, are extraordinarily common in Missouri, and the sight of dozens or even hundreds of their silken/twig bags attached to ornamental evergreen shrubs in the neighborhood where I lived as a kid remains vivid. I can remember “popping” the larvae inside to see their innards ooze out from the tip of the bag (I know—I’m not proud of it) and even cut open a few of the bags to see the larvae inside (that is, once the less sadistic and more scientifically curious side of me took over). Despite all of this, I had never seen an adult bagworm—male or female—until this night.

Obviously, these are males because they have wings—females remain wingless into adulthood and, in fact, never even leave the bag in which they’ve spent their entire lives. Bagworm males are distinctive in that their wings are virtually devoid of any scales, and I surmise that the generic name of the most common species in eastern North America—Thyridopteryx ephemeraeformis—is derived from the Greek thyris (window) and the Latin ptera (wing) in reference to this. I was fascinated by the strange appearance of these moths and even more fascinated by the curious manner in which the males held out the tip of their abdomen when at rest; reminiscent of a female releasing sex pheromone. This can’t be true, because it is the females that call from their bags to attract the males, and since the females remain within their bag, the male must insert his abdomen through the tip of the bag and all the way to the top where he can reach the female genital opening. Thus, the male abdomen is highly extensible and prehensile—I guess the males can’t keep an abdomen with that much stretching capacity still for very long. 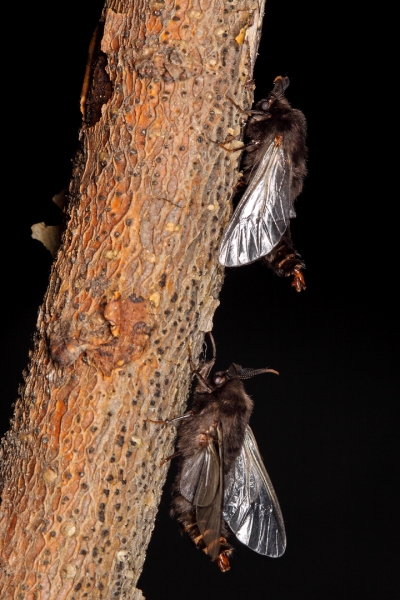 Based on gestalt, I presumed these represented T. ephemeraeformis since it is such a common and widespread species, but it’s not always wise to presume, especially in a relatively more southern location. The Moth Photographers Group lists five species in this genus in North America, two of which (T. alcora and T. meadii) seem to be southwestern in distribution. Of the remaining three, T. ephaemeraeformis is the only one I could find any photos or information beyond simple listings (the Moth Photographers Group lists no distribution records for T. rileyi or T. davidsoni), so I asked my lepidopterist friend Phil Koenig for his opinion. Phil informed me that T. ephemeraeformis has been recorded in Missouri 285 times in 49 counties, while T. rileyi is known from the state based only very old literature records and T. davidsoni not at all. Thus, the odds are definitely favor these males representing T. ephemeraeformis. Late summer is apparently the prime period of adult bagworm activity. I’ve not done much blacklighting late in the season because most of the beetles on which I’ve focused over the years and that are attracted to blacklights are active more during spring and early summer. This could explain why I’ve not until now seen male bagworms despite their commonness in Missouri.