This jewel beetle is, of course, Megaloxantha bicolor palawanica me beetle on several occasions while testing out different diffuser designs for my Canon MT-24EX twin flash unit. In the most recent one, I had tried combining SoftBoxes with my oversized concave diffuser and was pleased enough with the result that I thought I might try it in the field. Well, let’s just say the extensions for the flash heads and SoftBoxes attached to them was far too clumsy for field use, and I abandoned the idea after just a couple of hours. Back to the drawing board.

Despite the problems with using the SoftBoxes in the field, I still wasn’t ready to give up on the idea of double diffusion, and I had also learned that extending my oversized diffuser out over the subject (leaving it “open”) produced better lighting than curling it back (as I had been doing). Curling the diffuser back only served to turn it into a convex diffuser, which results in more specular highlighting because the center of the diffuser is closer to the subject than the edges. A concave diffuser provides more even lighting because all parts of the diffuser are roughly the same distance from the subject. Just about that time, I saw a DIY diffuser design by Piotr Nascrecki that, in principle, resembled Alex Wild‘s tent diffuser. It was, however, much larger—like mine, and thus amenable for use with a 100mm macro lens (the macro lens I use most commonly). This resemblance to Alex’s diffuser did make me notice one missing feature—double diffusion layers. That’s when I thought, why not do the same with an oversized diffuser rather than fussing with separate diffusers attached to the flash heads? I had some Bogen Imaging filter sheets on hand (#129 Heavy Frost), so I picked up some 1-mm steel wire at the hardware store, found a Bic pen in the drawer that I could cut in half, and built the diffuser as shown in Piotr’s post. I then secured a second filter sheet above the first sheet by taping the two together along their sides, being sure to ‘bow’ the upper sheet above the bottom sheet to achieve the double diffusion effect. Here is the result (please excuse the iPhone shots): 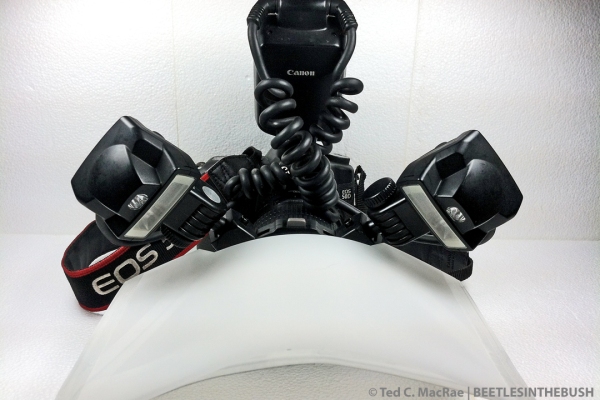 I have big hopes that this will finally be the diffuser I’ve been looking for. For as quick a test shot as the jewel beetle photo above was, the lighting is great and the colors are vibrant—both achieved with typical post-processing. My only complaint is the slightly greater “hot spot” intensity in the lower parts of the highlights in the eyes. This is due to the flash heads sitting near the base of the diffuser, and (as Piotr recommends) a second set of Kaiser shoes will allow me to move the flash heads not only more towards the center of the diffuser but also further above it to help spread out the light throw and even out the highlights. I’ll need to play around positioning the flashes to figure out the best positions depending on the size and distance of the subject—sitting up higher as they are puts them more on “top” than in “front” of the subject, so they will need to be directed downward more than I am used to doing. Even more important, however, is field usability, and I really think this diffuser will prove to be convenient and easy to use in the field—no more gawky arms attached to the camera, the diffuser attaching quickly and easily and, just as importantly, coming off easily and storing flat in the backpack, and large enough to do the job while not so oversized that it gets in the way. Piotr says this diffuser also works well with the 65mm macro lens, so I will certainly be testing that out as well.