Longhorned beetles (family Cerambycidae) are generally regarded as medium to large-sized beetles, but that doesn’t mean the family is without its pip-squeeks! There are a number of species, primarily in the tribes Tillomorphini, Anaglyptini, and Clytini (all in the subfamily Cerambycinae) that are remarkably effective mimics of ants. Some of these, especially members of the genus Euderces, are quite small, but none are smaller than the absolutely diminutive Cyrtinus pygmaeus. Measuring only 2–3 millimeters in length, the adult beetles can be found on dead twigs and branches among equally small ants such as Lasius americanus.

The species is said to be widespread across eastern North America, having been recorded on a number of hardwood trees (Lingafelter 2007). I have no reason to doubt this, having reared a number of individuals from dead branches of river birch (Betula nigra), chinquapin oak (Quercus muhlenbergii), willow oak (Q. phellos) and black oak (Q. velutina) (MacRae & Rice 2007), but in the wild I have only encountered the species three times—each time as a single specimen that I noticed crawling on my arm after a bout of beating a variety of dead branches. The most recent occasion was two weekends ago during a visit to the Mississippi Lowlands of southeastern Missouri. I had done a bit of beating in a forest dominated by black oak, blackjack oak (Q. marilandica), and southern red oak (Q. falcata) and not found much when I felt a “tickle” on my right forearm. I looked down and was just about to flick the “ant” off my arm when something about the way it moved gave me pause. I stopped and looked closer, then recognizing what it was, instinctively called out “Oh cool, Cryrtinus pygmaeus!” My field partners for the day had never seen the species, so I let them look before I placed it in a vial. I was sure they would ogle at the incredibly tiny longhorned beetle, but their subdued “Hmm”s makes me think they were less impressed with the find than I was.

Like other ant-mimicking genera, the elytra of this species bear two prominent humps near their bases.

If the species is so common, why have I not seen them more commonly or on the beating sheet proper as soon as I beat them from their host plant? The answer, I believe, is that they are such effective mimics of the tiniest of ants that I simply overlook them! The series of specimens retrieved from my rearing cans could not be missed, as I combed through the contents every week during the beetle emergence period to make sure I found anything—longhorned beetle or otherwise—that emerged from the wood inside. In the field, however, my search image is queued for more “normal-sized” beetles and especially movement. Most other ant-mimicking longhorned beetles, even though they look very much like ants, still run like longhorned beetles—swiftly, almost frenetically, looking for the earliest opportunity to spread their elytra and take wing. Cyrtinus pygmaeus, on the other hand, is slow and clumsy, not a runner at all (slower even than the ants they mimic). If the three individuals I’ve encountered in the wild to date hadn’t happened to fall on my arm rather than the beating sheet and gotten stuck in my hair and perspiration I may never have noticed them. 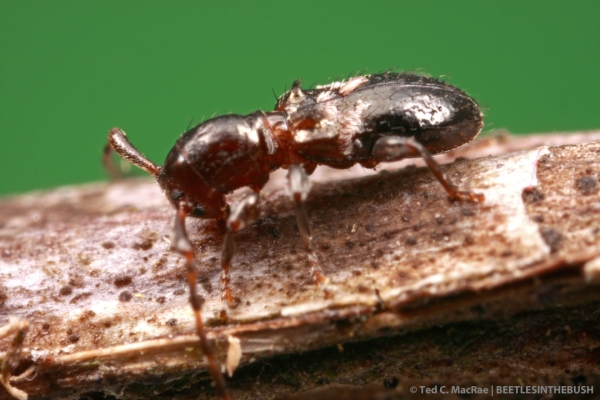 Bands of white pubescence on the bases of the elytra give the illusion of a narrow-waisted ant.

I considered putting the beetle on a branch for photographs as soon as I found it, but since I had already pulled it off my arm I had already lost the chance to take true field photographs. Instead, I placed the beetle live in a vial and photographed it the next day at home. All of the photos were taken hand-held with an MP-E 65 mm macro lens at the upper end of its magnification capabilities. The green background is simply a colored file folder placed about four inches behind the beetle as I photographed it.

p.s. can you tell me what unusual feature this particular individual exhibits?