For the past two years I’ve been working to refine my “blue-sky” technique for insect macrophotographs. This refers to careful balancing of camera and flash settings to achieve full-flash illumination of the subject while still allowing enough ambient illumination from the sky to produce a natural looking blue background. The use of flash, of course, is almost a necessity in insect macrophotography, as it’s nearly impossible to take hand-held photographs of insects, especially small ones, using only ambient light—there just isn’t enough of it to adequately illuminate the subject while using fast shutter speeds to prevent motion blur and high aperture settings to achieve acceptable depth-of-field. Flash illumination, however, has a drawback (actually several, but let’s focus on one)—if there isn’t something else close enough behind the subject to reflect light from the flash, the background will be jet black. In some cases this is perfectly fine, and it is almost always preferred over a cluttered background of jumbled branches and foliage. However, it usually doesn’t work well with darkly colored insects, and to me it gives the undesirable impression that the photo was taken at night. I suppose I could carry around colored cards to place behind the subjects that I photograph, but as a photographer who prides himself on the ability to take in situ field photographs of insects in their native habitats, something about the ‘artificiality’ of colored cards prevents me from resorting to them. A leaf placed behind the subject may be an acceptable alternative, but is usually possible only with quite small subjects (due to the size of the leaf needed) and is virtually impossible in dry, western habitats.

It’s hard to recommend specific camera settings for blue sky background, as they must be determined experimentally in each situation. The above photo of what I take to be Eremochrysa punctinervis (a green lacewing in the family Chrysopidae—identification via Frank & Slosser 1996) was taken with a 100mm macro lens set at f/16 and with ISO bumped up slightly to 320 (I normally use ISO 100–200) and shutter speed decreased slightly to 1/160 sec (I normally use 1/200 to 1/250 sec). The higher ISO makes the camera sensor more sensitive to light and the slower shutter speed allows more time for ambient light to reach the sensor. When aimed at the brightest part of the sky (next to but not right at the sun), these settings allowed sufficient light to register this beautiful shade of blue on the camera sensor. The ambient light alone is still not sufficient to illuminate the subject—if the photograph had been taken with these settings but without flash, the background would still be blue, but the subject and branch on which it is sitting would be nearly black! Only a flash pulse occurring while the shutter is open can provide enough light to fully illuminate the subject when the aperture setting is that high. In essence, the photo combines two exposures—a flash-illuminated subject and an ambient-illuminated sky. 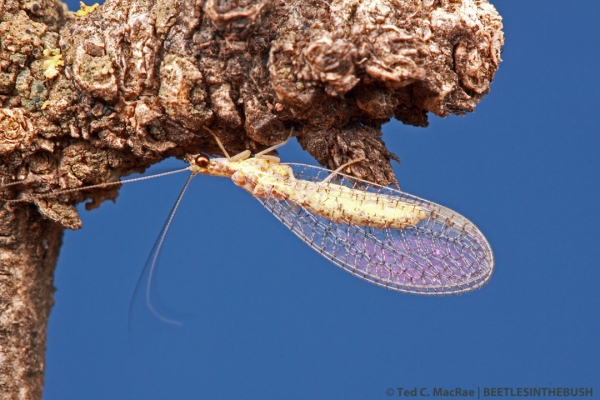 One problem that can be encountered when using this technique is the effect of wind. Holding the subject up against the sky exposes it to even the slightest of breezes, which can cause movement of delicate body parts such as the long antennae of this subject. What looks like blurring of the antennae is actually shading of the sky by the antennae as they fluttered in the wind. The antennae themselves were “frozen” by the very short flash pulse—much shorter than the 1/160 sec exposure, but they blocked enough light from the sky during the 1/160 sec exposure to darken the part of the background over which they moved. In the case of the finished photo shown at the beginning of the post, it was a relatively simple matter to use Photoshop’s cloning tool to remove the shadowing. Nevertheless, even more desirable is to avoid the need for such post-processing manipulations to begin with—waiting for a pause in the wind or moving to a more protected location would have obviated the need for PS cleanup.

4 thoughts on ““Blue-sky” tips and tricks”