Many species of jewels beetles in North America are known for having some degree of host specificity. This is especially true of species in the genus Chrysobothris, whose members are often restricted to a particular family, genus, or even species of host plant. There are some, however, that are not so fastidious in their choice of host plant, and perhaps the best example of such is the species Chrysobothris purpureovittata. This pretty and not uncommonly collected species has been associated with well over two dozen species of deciduous trees representing 21 genera in eleven plant families.

Interestingly, the extent of this species’ polyphagy has not been fully appreciated until recently. At the time of Fisher’s (1942) revision of North American species, the only recorded larval hosts were elm (Ulmus sp.) and plum (Prunus sp.). Numerous adult hosts—i.e., plants on which adults had been collected only—were recorded in subsequent years, first by Vogt (1949) in south Texas and later by Nelson et al. (1982) from other locations. However, it was not until my Missouri jewel beetle survey (MacRae 1991) and subsequent “notes papers” by me and colleagues (MacRae & Nelson 2003, MacRae 2006, Wellso & Jackman 2006) that the true diversity of larval hosts became known. A majority of the larval host records are from the Ulmaceae, including several species of hackberry (Celtis tenuifolia, C. laevigata, C. ehrenbergia, C. reticulata) and cedar elm (Ulmus crassifolia), suggesting that despite its polyphagous nature there is some preference for members of this plant family. On my recent early June trip to northwestern Oklahoma, I encountered this species at several localities as abundantly as I can ever recall, with nearly all of them beaten from hackberry. 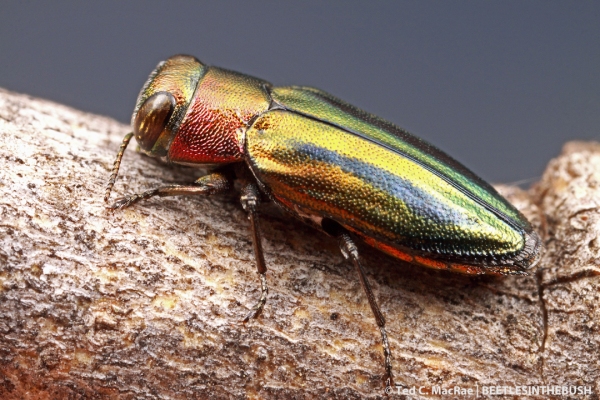 Chrysobothris purpureovittata is distributed primarily in the central and south-central U.S., with records from Indiana west to Kansas and south to Mississippi and northern Mexico. A population at the western edge of its distribution (Cloudcroft, Otero Co., New Mexico) associated with mountain mahogany (Cercocarpus montanus) was recently described as a separate subspecies (C. purpureovittata cercocarpi) by Westcott & Nelson (2000)—it is distinguished from nominotypical populations by the entirely red pronotum and uniformly dark elytra.

MacRae, T. C. and G. H. Nelson. 2003. Distributional and biological notes on Buprestidae (Coleoptera) in North and Central America and the West Indies, with validation of one species. The Coleopterists Bulletin 57(1):57–70.

Vogt, G. H. 1949. A biologically annotated list of the Buprestidae of the Lower Rio Grande Valley, Texas. Annals of the Entomological Society of America 42(2):192–202.