On Day 2 of our late August Great Basin Collecting Trip (GBCT), we headed east from Reno towards Fallon (Churchill Co.) and surrounding areas of western Nevada. Our quarry on this day was one of the spectacular Crossidius coralinus subspecies—in this case C. c. temprans. This subspecies was described by Linsley & Chemsak (1961) from large series of specimens collected in Lassen Co., California, but also mentioned were specimens from several locations in west-central Nevada. This material was not included in the type series because of the disjunct distribution but was otherwise not distinguished from the temprans populations, and for us the drive to Churchill Co. was much more feasible logistically than Lassen Co.

The female in the photo above is the first individual I encountered at the first stop we made to look for them—a swale about 12 miles west of Fallon in which we noted thick stands of gray rabbitbrush (Chrysothamnus nauseosus) in the early stages of flowering. It was still fairly early in the day, and though we scoured the area thoroughly only a few individuals were seen. The female exhibits some of the main characteristics that set this subspecies apart from the other red/black coralinus subspecies, including the faint bluish overtones, the deep red color, the relatively fine but dense elytral punctation, and its smaller average size. Females in particular exhibit a uniform, broadly expanded black pattern on the elytra that extends along the suture to at least the basal third of the elytra and also possess broadly black humeri connected by a black basal band. 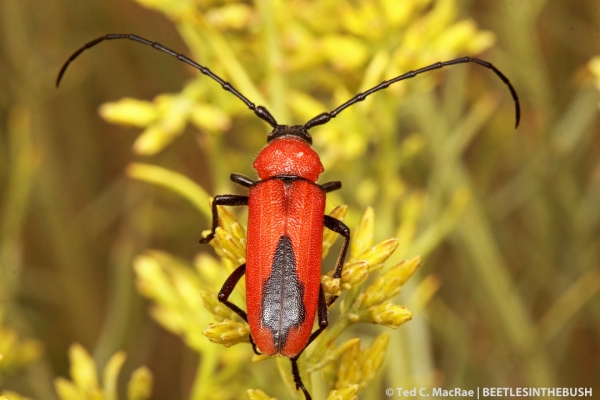 We had better luck finding individuals in the area 10–15 miles south of Fallon. I’m not sure whether this was due to actual greater abundance or the fact that it was now late morning and temperatures had warmed since our first stop. Nevertheless, we found a mating pair on one of the plants that I had hoped to photograph, but the female got skittish and took flight. Normally when one partner flees the other one does as well, but for some reason the male stayed put—nicely perched on top of the plant—and allowed me to take some photographs. Because I had already disturbed the female, I was pretty sure any attempted handling of the plant to position it with the sky in the background would cause the male to flee as well, so I photographed it as it sat—messy background and all. Still, the male shows the typical characters for males of the subspecies, in particular the faintly bluish dark pattern that is slightly expanded laterally and tapers anteriorly along the suture to the basal one-third of the elytra.

Lateral profile of the male (same individual as above) shows a narrow black band at the base of the elytra.

This lateral shot of the same male was taken, in part, to get an angle that allowed for a cleaner background, but it also more clearly shows the very narrow black band at the base of the elytra that connects the humeri, though the black markings are not as broad as in the female. After photographing this male, we found a spot near Carson Lake where the rabbitbrush was common not just along the road, but in the adjacent rangelands and along dikes adjacent to the wetlands surrounding the lake. There we found pretty good numbers of adults and worked the area for a couple of hours until we had adequate series. 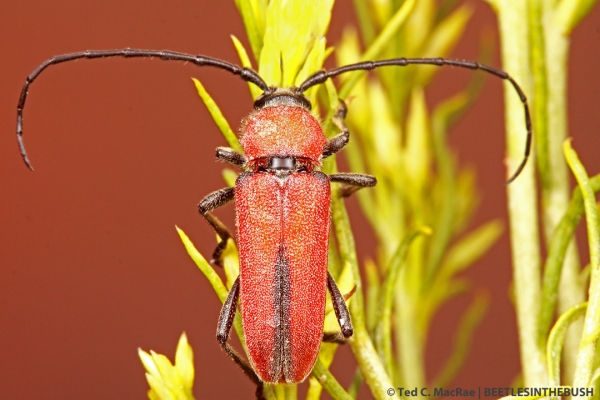 This male from Pershing Co., Nevada has the elytral markings reduced to a narrow sutural stripe.

Another reason for going east on this day was to take a shot at C. hirtipes bechteli, a subspecies known from only a few localities along the I-80 corridor in north-central Nevada. The westernmost locations were close to Lovelock—a 90-minute drive from where we were, so when we finished up in the area around Fallon we headed towards Lovelock. We knew finding this subspecies was a long shot, since all of the records in Linsley & Chemsak (1961) were from mid- to late September, but since making the effort didn’t impact our ability to arrive at the first planned stop the next day at a decent hour we had nothing to loose by looking for it. We found one of the localities, but the plants at this relatively higher altitude site were still in the earliest stages of bloom, and we didn’t see any adults within about a half-mile stretch of roadside. The effort, however, was not for naught (I love saying that!), as the lateness of the hour and a heavy blanket of smoke from the nearby Rim Fire created a most beautiful blood red sky. Before the day slipped away completely, we stopped at a spot closer to Lovelock to see if we could find a C. coralinus temprans adult to photograph against this unusual backdrop and were immediately rewarded with the fine male shown in the photograph above. Sitting against this marvelous background, the male shows a much reduced black elytral marking that is sometimes the case with males of this subspecies. I hurriedly took as many shots as I could (getting that one photo that I really like is, for me, still a numbers game), but the conditions were fleeting and within a short time it became too dark to take any more.