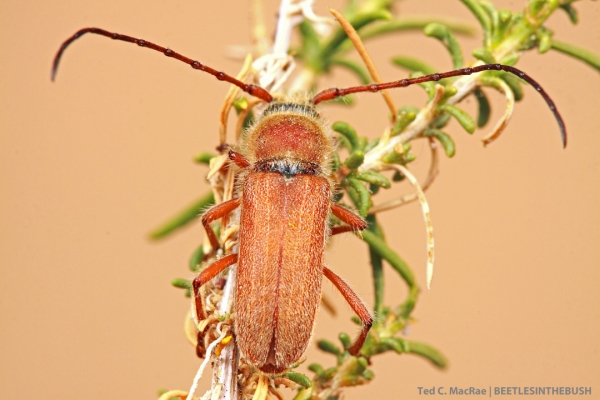 Linsley & Chemsak (1961) characterize the longhorned beetle species Crossidius hirtipes as “probably the most diverse species within the genus.” Occurring throughout the Great Basin and adjacent areas, the variability it expresses in punctation, color, elytral pattern and pubescence have resulted in the recognition of 16 named subspecies and numerous additional distinct but unnamed populations. During our Great Basin Collecting Trip (GBCT) in late August, we targeted ten of the named subspecies (representing the majority of populations found across the southern half of the species’ distribution) and succeeded in finding eight of them. I’ve already featured C. h. immaculatus, occurring across northern Nevada and northeastern California and the first beetle we found on the trip, and the photo above shows a male of what we consider to represent C. h. rubrescens—one of three C. hirtipes subspecies restricted to a very small area in west-central Nevada. Linsley & Chemsak (1961) described this subspecies from a series taken just north of Yearington on Chrysothamnus greenei (now Ericameria greenei), noting that it differs from other subspecies by its pinkish cast to its coloration and its pale appendages.

We almost did not find this subspecies.  We had stopped at several places along the road as we approached Yearington from the north and finally stopped at a spot 2.6 miles north of town with good stands of E. greenei. Although we found a few C. coralinus temprans on the plants, we did not see C. hirtipes. While we were searching we noticed a much smaller yellow-flowering asteraceous plant that at first we thought might be something in the genus Haplopappus but which I now believe represents a variety of Chrysothamnus viscidiflorus—the normal host plant for most subspecies of C. hirtipes (a plant voucher was collected and has been sent off for identification). We searched these plants as well but didn’t see any beetles on them, and after a while we decided we’d given the locality a good enough look and that we should move on. We began walking back towards the car, and as we approached the car I happened to look down and saw a mating pair of C. hirtipes sitting on a C. viscidiflorus flower. The pair split and bolted right when I saw them, but we managed to capture one of them and decided maybe we should look around a little more. The beetles were scarce, and another hour of searching produced only a handful—mostly in a small area further north of the area we had been searching. We then checked a couple of other nearby spots but found only a few host plants and no beetles, so we decided to go back to the site and search again. While none were seen in the original spot, we found much better stands of the plant in the adjacent area even further to the north and managed to collect a decent though not large series of adults before the setting sun caused the beetles to retreat and end our day. The individual in the photo above (recognizable as a male by its relatively longer antennae and immaculate elytra) was photographed as the setting sun turned the smoke-filled sky to a soft, burnt orange color that nicely compliments the color of the beetle.