Conditions for collecting didn’t look very promising when I awoke on Day 4 of my early June trip to northwestern Oklahoma. After collecting at Alabaster Caverns State Park the previous day, I had traveled a few hours further west during the evening with plans to collect at Beaver Dunes State Park the following morning. However, heavy rain during the night and lingering sprinkles during the morning had me thinking it might be a lost day. By noon, however, the rain had completely abated, and though the sky still hung low and gray I decided I had nothing to lose by at least trying. I knew quickly that I’d made the right decision, as within minutes of arriving at the park I began seeing jewel beetles (family Buprestidae) landing on my beating sheet. Hackberry (Celtis sp.) was abundant along the roadways and supporting great numbers of individuals in the genera Chrysobothris and Agrilus. 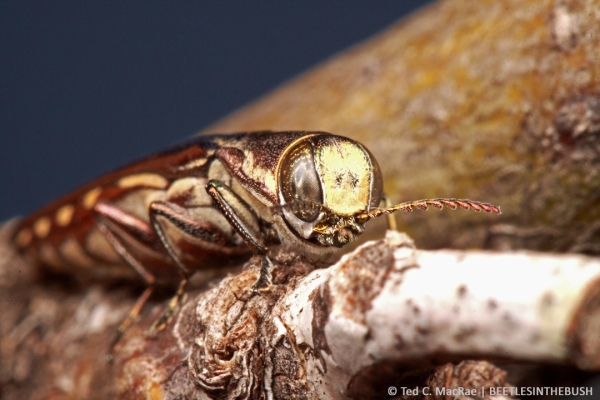 By the time I reached the back end of the campground, I’d collected rather large series of the hackberry associates when I noticed a dying honey locust (Gleditsia triacanthos) tree in one of the campsites. Honey locust (and fabaceous trees, in general) is favored by several species of jewel beetles—at least a dozen species have been recorded in the literature reared from its branches, and another dozen species have been collected on it as adults. As a result, when jewel beetles are active it’s always a good bet that some will be found on honey locust when present, especially if the trees are stressed or dying. I walked up to the tree—a fairly large one—and scanned the lower branches overhead to see if I could notice any activity. I did not, but I nevertheless placed my beating sheet underneath one of the branches, gave the branch a quick “whack” with the handle of my net, and lowered the beating sheet to have a look. To my surprise, I saw at least 50 adults of the jewel beetle species, Agrilus difficilis, sitting on the beating sheet. Because of the cloudy conditions and cool, moist air, the beetles were not very active and did not immediately zip off the beating sheet as they would have had the day been sunnier and warmer, so I was able to rather easily collect a decent series of the beetles without any trouble. I had never seen the beetles so numerous, however, so I continued to beat a few more branches—each yielding just as many adults as the previous. I was astonished by the fact that the beetles were so abundant on the branch, yet I had not seen them even when I specifically looked for the presence of jewel beetles in the branches prior to beating them. Taking another look at the branches, I was able to visually detect just a few individuals, and those only with great difficulty, until I pulled the branch down and was able to look at it up close.

Honey locust became a rather popular landscape ornamental tree in the eastern U.S. after the development of thornless cultivars, and while at first the tree seemed to be relatively free of insect pests, A, difficilis has proven to be one of several insects that have adapted to these landscape plants and occasionally cause economic damage. Trees in urban landscapes are often planted in suboptimal sites and suffer from stress to a much greater degree than their native counterparts, and the beetles take advantage of the lowered defensive capabilities of these stressed trees to gain entry. Larvae mine beneath the bark and damage the cambium layer, interfering with movement of water and nutrients. Trees in later stages of attack usually exhibit branch dieback and D-shaped holes in the trunk and main branches where adults have emerged from the tree. In severe cases infestation by this species can result in death of the tree. As mentioned above, there are twelve other species of jewel beetles that have been reared from the wood of honey locust. All of these have been reared only from dead wood rather than living trees, but adults of these species might, nevertheless, be encountered on living trees. They include three species (A. egeniformis, A. fallax, and A. pseudofallax) that might be confused with A. difficilis; however, the latter is easily distinguished from these and other congeners by its relatively large size, coppery color with purple luster, absence of any spots or pubescent lines on the elytra, and distinctive patches of white pubescence along the sides. As with most wood boring beetles, chemical control of the adults or larvae is usually not feasible once an infestation has already begun—the best method to avoid infestations in landscape trees is proper site selection and optimal care to prevent stress that reduces the ability of the tree to fend off attack.