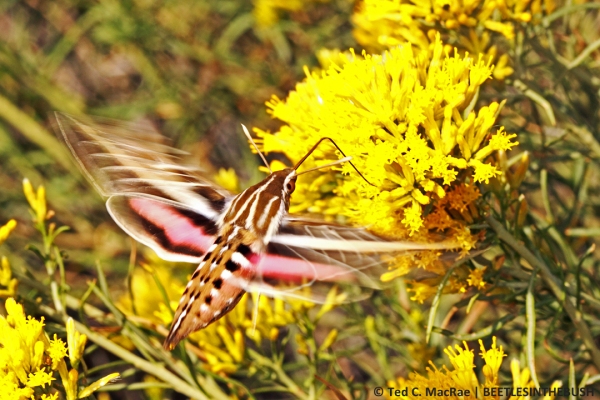 I admit it—I give short shrift to Lepidoptera compared to other groups of insects. This is not because I don’t think they deserve attention; they are a stunning group with an amazing suite of adaptations to life on earth. It’s just that they already receive a lot of attention from others, while so many other equally amazing groups of insects remain almost completely unknown and under-appreciated due to the sole fact that they are smaller and less conspicuous. I’m not anti-Lepidoptera; I’m just pro-other Insecta. Every now and then, however, I must give Lepidoptera their due, and since today is Wednesday it’s a good day to feature a hawk moth that I got but a single photograph of on my late August Great Basin collecting trip.

Hyles lineata is not a particularly rare insect—in fact, it is one of the most common and widespread species of hawk moth (family Sphingidae) in North America. What is hard to come by, however, is a good shot of an adult nectaring at a flower. While such shots abound, most feature busy backgrounds and blurred wings. My photo is no different. However, I am a coleopterist, and when I took this shot there were also longhorned beetles present on the same flowers—it could be considered remarkable that I even diverted my attention long enough to attempt a shot. Of course, hawk moths are amazing creatures that have independently arrived at the same flight abilities and feeding habits as the equally amazing but taxonomically distant hummingbirds with their ability to hover motionless while sipping nectar and beating their wings at blinding frequencies. With little time to practice and even less to optimize settings, I’m amazed that I even got an adequate photograph before the moth zipped off to another bush. Yes, hawk moths suck, and that is amazing!