Welcome to the 6th Annual “Best of BitB”, where I pick my favorite photographs from the past year. Like last year, 2013 was another year of heavy travel. For work I did my annual tour of soybean field sites throughout Argentina during late February and early March, then cranked it up for my own field season with frequent travel to sites in Illinois and Tennessee from May to October. In the meantime I spent a week at company meetings in Las Vegas in August, toured field sites across the southeastern U.S. for two weeks in September, visited Argentina again in October to finalize research plans for their upcoming season, and finished off the travel year by attending the Entomological Society of America (ESA) Meetings in Austin, Texas during November. On top of all this, I managed to slip in two of the best insect collecting trips I’ve had in years, with 10 days in northwestern Oklahoma in early June and another 10 days in California, Nevada, Utah, and Colorado during late August, and I got to play “visiting scientist” during short trips to Montana State University in late July and the Illinois Natural History Survey in late October! Of course, during my brief interludes at home I wasn’t sitting still, giving entomology seminars to several local nature societies and hosting two ESA webinars on insect photography. Needless to say, come December I was more than ready to spend some quite time at home (well, except for hiking most weekends) and am happy to report that I’ve successfully become reacquainted with my family and office mates. It’s a peripatetic life—and I wouldn’t have it any other way!

Okay, let’s get down to business. Here are my favorite BitB photographs from 2013. This year was less about learning new techniques as it was about refining the techniques I’ve found most useful for the style I’ve chosen as a photographer, i.e., hand-held, in situ field shots that (hopefully) excel at both natural history and aesthetic beauty. Links to original posts are provided for each photo selection, and I welcome any comments you may have regarding which (if any) is your favorite and why—such feedback will be helpful for me as I continue to hone my craft. If you’re interested, here are my previous years’ picks for 2008, 2009, 2010, 2011, and 2012. Once again, thank you for your readership, and I hope to see you in 2014! 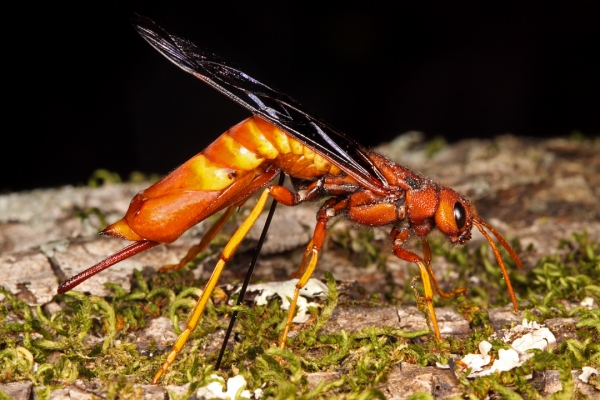 From Ovipositing Pigeon Horntail (posted 6 Jan). I like this photo for the combination of vibrant, contrasting colors between the wasp and moss-covered wood and the visualization it provides of the remarkable depth to which this wasp will insert its ovipositor into solid wood! 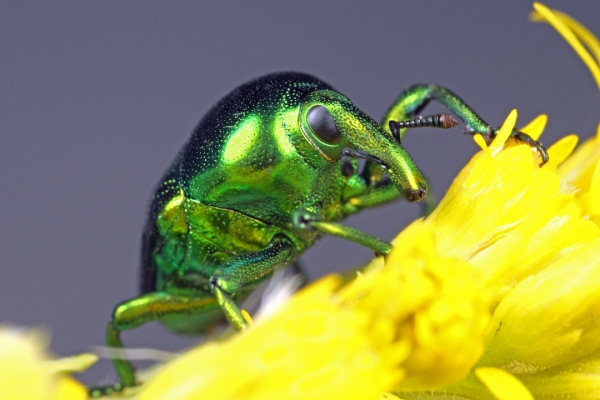 From Giving me the weevil eye! (posted 28 Apr). While a little soft, the color combination is pleasing and the pose taken by the beetle almost comically inquisitive. 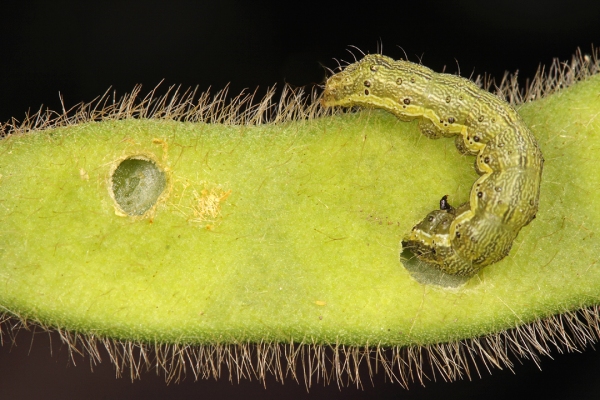 From Bollworms rising! (posted 30 Mar). This is the first photo of an economic pest that has made one of my “Best of BitB” lists. The two holes in the soybean pod, one with the caterpillar and its head still completely inserted, visualizes how the feeding habits of these insects can so dramatically affect yield of the crop. 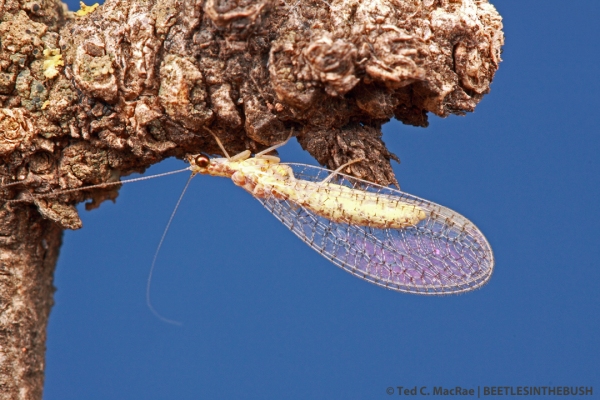 From “Blue-sky” tips and tricks (posted 1 July). Insects with a lot of delicate detail and long, thin appendages are especially difficult to photograph against the sky due to wind movement. See how I dealt with the antennae of this delicate lacewing without resorting to the standard black background typical of full-flash macrophotography. 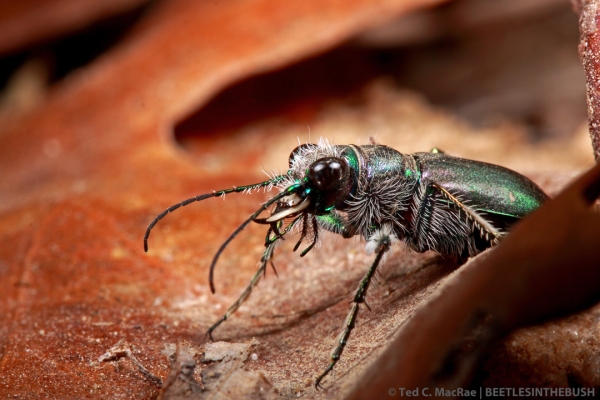 From The Festive Tiger Beetle in Southeast Missouri (posted 25 Oct). I like this photo a lot more now than I did when I first took it. Its shadowy feel and the beetle “peering” from behind a leaf edge give a sense of this beetle’s attempts to hide and then checking to see if the “coast is clear” 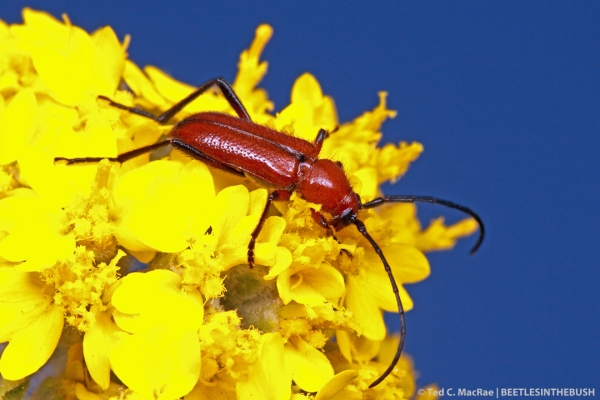 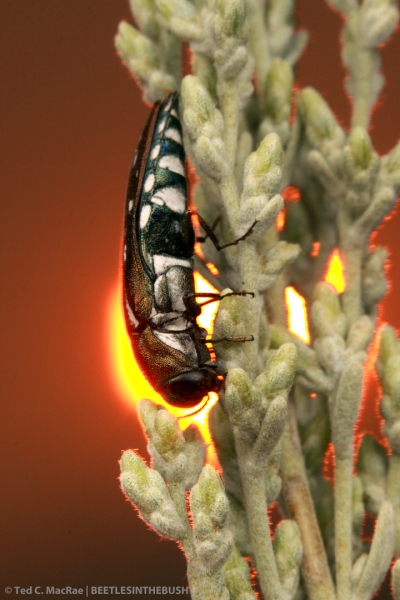 From Sunset for another great collecting trip (posted 1 Sep). This photo is not without its problems, with a little blurring of the backlit fuzz on the plant, but the placement of the sun behind the subject’s head and resulting color combination make it my favorite in my first attempts at achieving a “sun-in-the-sky” background with a true insect macrophotograph. 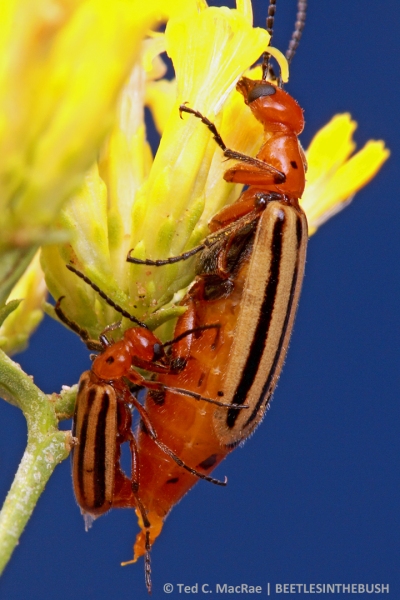 From Midget male meloid mates with mega mama (posted 8 Nov). Another blue-sky-background photograph with good color contrast, its real selling point is the natural history depicted. with some of the most extreme size dimorphism among mating insects that I’ve ever seen. 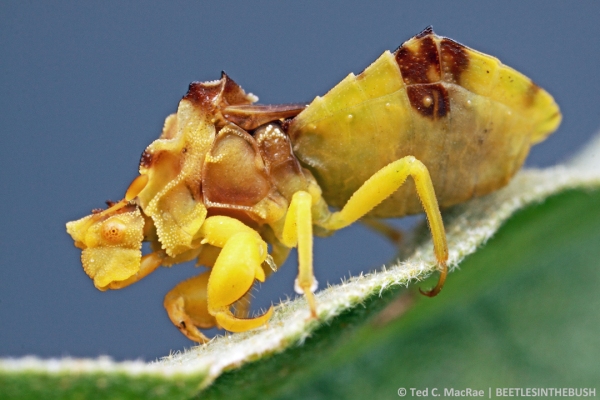 From ESA Insect Macrophotography Workshop (posted 13 Nov). The oddly sculpted and chiseled body parts of ambush bugs makes them look like they were assembled from robots. Contrasting the body against a blue sky gives a more unconventional view of these odd beasts than the typical top-down-while-sitting-on-a-flower view. 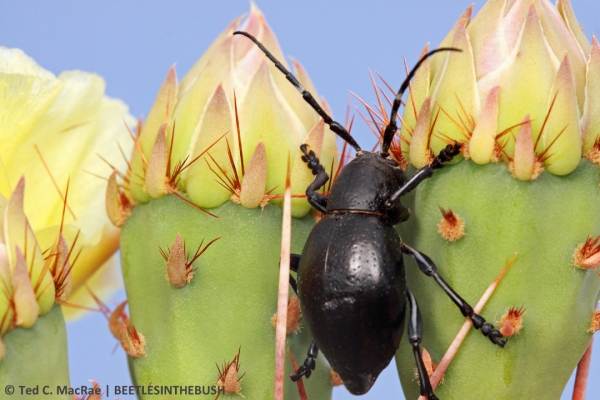 I hope you’ve enjoyed this 2013 version of “Best of BitB” and look forward to seeing everyone in 2014.