“Westerly from Westgard Pass is a view equaled in few parts of America. In the middle distance, a dozen miles away and nearly a mile below, lies the fertile Owens Valley, extending at right angles north and south over a hundred miles, and on the farther side, distant a score of miles, tower the snow-clad Sierras, with serrated crests and symmetric domes and peaks outlined against the sky at an approximate height of two and one-half miles vertical above the level of the ocean, and extending north and south far as the eye can see. The vision is rich reward for a journey of a thousand leagues.”—A. L. Westgard, March 1915

View to Westgard Pass from higher up in the White Mountains near Ancient Bristlecone Pine Forest.

After a morning spent searching for Crossidius coralinus caeruleipennis (perhaps the most sublimely beautiful of the subspecies) in the high desert sage of the wide open Owens Valley floor near Bishop, California, we made the short drive south to Big Pine, turned sharply left, and began the slow, twisting ascent through a narrow gap between the White Mountains to the north and the Inyo Mountains to the south. Eventually reaching an elevation of 7,313 ft,  Westgard Pass serves as access to Earth’s oldest living things! and, in doing so, provides some of the most striking scenery in the entire Basin and Range Province of eastern California.

Field mate Jeff Huether and I no doubt wanted to see the grotesquely beautiful trees growing in Ancient Bristlecone Pine Forest and were happy to enjoy the magnificent scenery along the way, but our trek to Westgard Pass had also a strictly entomological purpose—to search for Crossidius hirtipes nubilus, among the most uniquely colored and geographically restricted of the C. hirtipes subspecies. Approaching the summit, the narrow, rocky gorge opened up to a broad expanse of pinyon/juniper woodland, and nestled among the ubiquitous sage we found the plant we were looking for—yellow rabbitbrush (Chrysothamnus viscidiflorus) in full bloom.

It took a while, however, before we found the beetles that we were looking for. Robust gray rabbitbrush (Ericameria nauseosa) plants in full bloom conspicuously dominated the roadsides and demanded our initial attentions, but our only reward was the widespread Crossidius ater. Not even a single Crossidius coralinus specimen could be claimed as consolation. Still, we knew the real quarry was further back from the roadsides, on the much smaller and less conspicuous yellow rabbitbrush that serves as an adult host for Crossidius hirtipes and most of its subspecies. Once we turned our attentions to these smaller plants we found the first adult fairly quickly, but precious few were seen considering the many plants that we examined until we finally zeroed in on one area just south of the summit where the beetles seemed to occur with slightly greater frequency. While not numerous, we eventually found enough beetles for us to declare, “Let’s go see the bristlecone pines!” 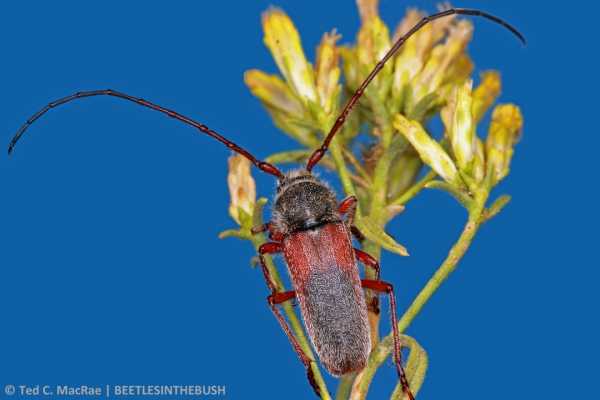 This subspecies is among the most distinctive of all the C. hirtipes subspecies due to the combination of dark reddish-brown coloration and extreme, dark clouded area of the elytra (Linsley & Chemsak 1961). It most closely resembles C. h. rhodopus, which occurs further north in the Mono Basin, but that subspecies is not as dark and lacks the extensive clouding of black on the apical portions of the elytra.

The dark clouding actually represents an expansion of the dark stripe found along the suture of the elytra of many C. hirtipes subspecies, most of which exhibit sexual dimorphism in the degree to which this stripe is developed. In some subspecies the stripe is present in the females but absent in the males, while in others the stripe is present in both but more fully developed in the female. In C. h. nubilus the sutural stripe reaches an extreme state of development, covering much of the apical two-thirds of the elytra in the male and being so greatly expanded in females that almost the entire elytra are covered except for two small subbasal patches revealing the ground color of the elytra.