…or, “There’s something fishy going on here!”

After a day in the vicinity of Yearington, Nevada  looking for (and eventually finding) a population of Crossidius hirtipes longhorned beetles assignable to subspecies “rubrescens“, field mate Jeff Huether and I dropped a little further south to look for two additional subspecies—C. h. immaculipennis and C. h. macswaini. Like C. h. rubrescens, populations assignable to these two subspecies are also restricted to a small area in west-central Nevada. Chemsak & Linsley (1959) described C. h. immaculipennis from specimens collected 10 miles north of Smith (Lyon Co.) and two years later (Linsley & Chemsak 1961) described C. h. macswaini from 19 miles SE of Wellington (Douglas Co.). We were still under the smoke plum from the now 9-day old Rim Fire in the nearby Sierra Nevada, which came and went during much of the day (top photo) and eventually settled in to create some amazing sunset landscapes (bottom photo).

Rim Fire smoke moves in and out of the area | 19 mi S of Wellington, Toiyabe National Forest, Nevada.

As had happened the day before with C. h. rubrescens, success did not come quickly or easily. We first searched for the type locality of C. h. immaculipennis, but many parts of the area have been converted to agriculture, and in the precise area 10 miles north of Smith we found only vast fields of dark green, irrigated alfalfa and not the rabbitbrush chaparral habitat required by these beetles. We did a little searching in surrounding areas and eventually found one rather nice-looking patch of ground with healthy stands of Chrysothamnus viscidiflorus in full bloom. Mindful of the previous day’s experience with finding the beetles often ensconced down within the inflorescences—especially as cooler temperatures set in, we took care to carefully inspect the blossoms in case the cool morning temperatures were inhibiting the beetles from coming back up for the day. Alas, we saw no beetles despite spending a considerable amount of time searching.

Rather than beat a dead horse, we decided to drive a short distance south and west to the town of Wellington, where a fellow cerambycid collector had found the subspecies a few years earlier. He had provided us with some detailed notes on the specific localities where he found the beetles, and these proved to be of great help as we passed through endless, seemingly acceptable chaparral habitat trying to decide exactly where we should stop and invest more time to look for the beetle. We stopped at one of the sites indicated in the notes and immediately found a beetle on one of the first plants we checked, and eventually after a gap in finding any more we found an area where good numbers of the plants were supporting decent numbers of the beetles. Chemsak & Linsley (1959) distinguished C. h. immaculipennis by its reddish legs, pale color, and complete lack of elytral markings in the male, exemplified by the male shown in the photo above. 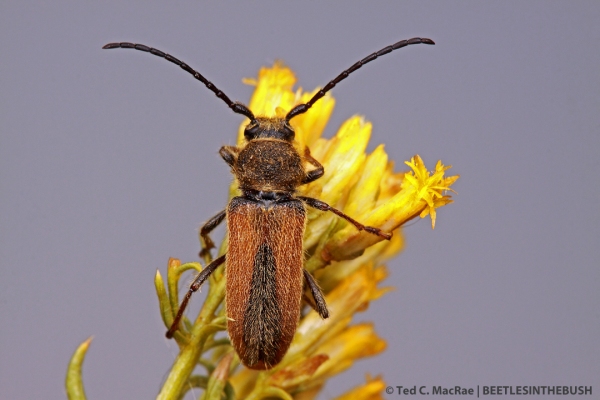 As we searched the plants and found more and more individuals, I noticed an occasional adult that seemed to be a little more yellowish than reddish and with distinct sutural maculae. I didn’t think much about it then, chalking it up to individual variability, but after returning home and having a chance to look at the specimens more closely I was surprised to determine that these few beetles actually are a better fit for the second subspecies we planned to search for that day—C. h. macswainei. We had found both subspecies at the same site and didn’t even realize it. Okay, I know what you’re thinking… subspecies must exhibit allopatric geographic distributions (cannot occur together at the same place and time). It is, thus, tempting to declare that the two “subspecies” are actually not distinct, but rather represent distinctive extremes of individual variation in a single interbreeding population. However, one must also consider the possibility that the two subspecies represent reproductively isolated populations and, thus, qualify as distinct species. I’m not qualified to make that judgement, but I will note that most of the individuals encountered were assignable to C. h. immaculipennis  and the rest to C. h. macswainei, but that no “intergrades” were found. 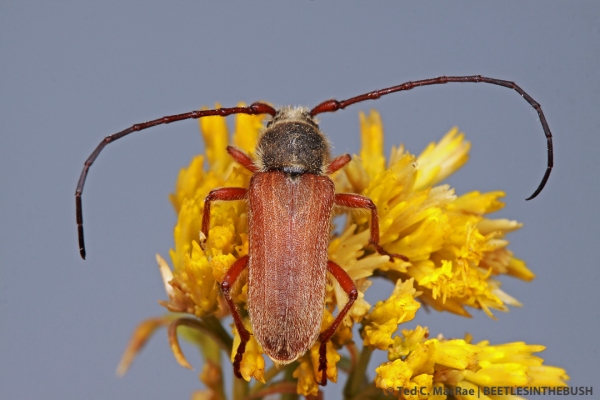 After collecting adequate series from W of Wellington, we traveled further south of town to the type locality of C. h. macswainei (not knowing we already had it!). The holotype and most of the paratypes were collected 19 miles S of Wellington (Linsley & Chemsak 1961), but a number of paratypes had also been collected 14 miles south of town, so we stopped there first in an unsuccessful bid to find the subspecies before moving on to the type locality a few miles further south. Within a few minutes of arriving, I found the individual shown in the photo immediately above, presumed that I had found the subspecies we were looking for, and popped it into a vial alive as a photo backup if we did not find any other individuals with which I could attempt field photographs. Ironically, that is exactly what happened—despite Jeff and I scouring every plant we could find in about a 1-mile stretch along each side of the road, we never found another beetle. Later that evening I took the above individual out of its vial for photographs, but it never really “perked up” to look fully natural, resulting in “bum” antennae that give away the staged nature of the photograph. Again, it was not until I got back home and could look at the specimen closely before I realized that it did not at all fit the description of C. h. macswainei, but instead seemed to be a good match for the subspecies C. h. rhodopus, known from only a short distance further south but—until now, at least—apparently restricted to the Mono Basin in east-central California (see this post for more details about this subspecies). Jeff has since reported to me that some of the beetles he collected at the “C. h. rubrescens” locality (see this post) also are a match for C. h. macswainei, adding yet another wrinkle to those that resulted from this day’s collecting. Such inconsistencies with the published literature may tempt some to scrap all of Linsley & Chemsak’s subspecies, but considering that those two authors examined more than 12,000 specimens during the course of their studies such a reaction would be both premature and presumptuous. What is needed is more study—more specimens from more localities, hopefully augmented with DNA sequence analysis. For the latter goal we did our part, dropping a specimen or two from every locality in which we found beetles into ethanol for just such purpose. Until such studies are done, I prefer to withhold judgement about whether C. hirtipes is comprised of one highly polytopic population, several subspecifically distinct populations, or perhaps even multiple distinct species.

Even though we found only a single beetle at the second locality, our persistence in searching until the day ran out was rewarded by a most spectacular sunset caused by thick haze from the nearby Rim Fire in California. It would also be our last day in Nevada before dropping south into California and spending the next several days in successful bids for C. coralinus monoensis, C. c. caeruleipennis, C. h. nubilus, and C. h. rhodopus.