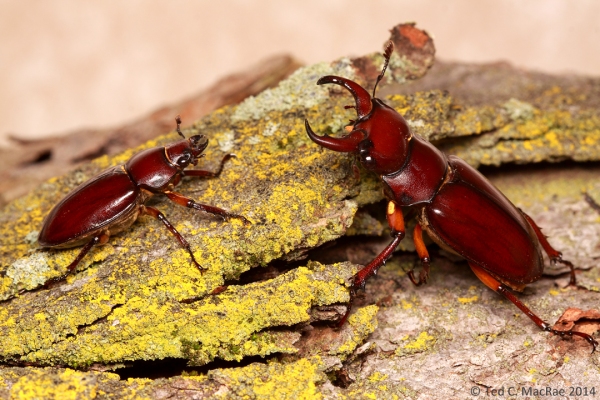 Last month I posted some photos of the very “stag beetle-ish” looking longhorned beetle, Parandra polita. Chestnut brown in color with large, forward projecting mandibles, this member of the longhorned beetle subfamily Parandrinae looks almost nothing like longhorned beetles in other subfamilies but very much like a small species of stag beetle (family Lucanidae). If it weren’t for the straight rather than elbowed antennae, even experienced coleopterists might be fooled by its appearance. The beetle had been attracted to an ultraviolet light setup in wet bottomland forest at the southern tip of Illinois where the Mississippi and Ohio Rivers meet. Perhaps not coincidentally, several true stag beetles representing both males and females of the species Lucanus capreolus were attracted to the lights that night as well.

Males are distinctive by their large, sickle-shaped mandibles.

The genus Lucanus contains the largest stag beetles in North America—the most desirable of the handful of species it contains being L. elaphus (North America’s largest stag beetle) due to the male’s outrageously enlarged mandibles and the species’ general scarcity. Lucanus capreolus nearly matches L. elaphus in size and has an equally broad distribution across eastern North America, but it seems to be a more common species and has the male mandibles only moderately (though still distinctly) larger than the female. Despite its more routine occurrence, I rarely see more than a few individuals at a time, and they are almost always all males. This night, however, I was fortunate to encounter not only males but several females as well. I’ve previously photographed the female of this species (Diminishing Stag Beetle), but this was my first chance to photograph both male and female together. 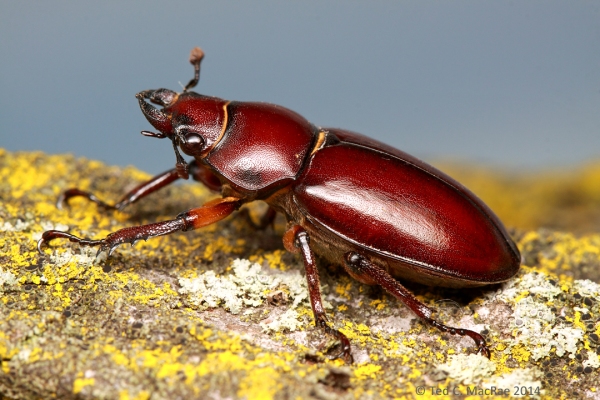 Females have much smaller mandibles (but are still capable of delivering a painful ‘nip’).

While male L. elaphus are undeniably distinct, I frequently see confusion about how to distinguish male L. capreolus from L. placidus (the third eastern North American species of the genus, occurring more sporadically than L. capreolus), and separating females of all three species can be even more confusing. Male L. elaphus are readily identified by their greatly elongated and multi-toothed mandibles, but a suite of characters may need to be employed for females and non-elaphus males. The best character to use for L. capreolus are the distinctly bicolored femora that are yellowish at the base; however, color can be variable and some individuals will exhibit the more uniform chestnut-brown color typical of L. elaphus. Lucanus placidus, on the other hand, is usually distinctly darker in color than either of the other two species. Surface sculpture of the elytra and pronotum also offer useful characters. The elytra of L. capreolus and L. elaphus are rather smooth, while in L. placidus they are more distinctly punctate/rugose. The pronotum of both L. capreolus and L. placidus, however, is usually distinctly punctate compared to the relatively smooth pronotum of L. elaphus. The shape of the labrum (projection between the mandibles) is also usually distinctive and is not influenced by gender like the mandibles. In L. elaphus the labrum is rather pointed, while in L. capreolus and L. placidus it is more blunt (indeed, in L. placidus the labrum can almost be described as quadrate, or “squared”). Lastly, the number of teeth on the inner margin of the mandibles is usually diagnostic for females of the three species—L. capreolus possessing one tooth, L. placidus possessing two, and L. elaphus possessing more than two.

Unlike most insect groups, male stag beetles rather than females are generally larger.

4 thoughts on “Stag and “stagette” beetle”