One of my favorite longhorned beetle species is the amorpha borer, Megacyllene decora. Like its close relative, the locust borer—M. robiniae, this large, beautiful, black and yellow beetle is a classic harbinger of fall by virtue of its late-season adult activity period and affinity to flowers of goldenrod (Solidago) and snakeroot (Eupatorium). Compared to the locust borer, however, it is larger, chunkier, and more boldly marked, and despite the commonness of goldenrod flowers it is far less commonly encountered than the locust borer due to the more restricted habitat preferences of the larval host plant (false indigo—Amorpha fruticosa).

The beetle in these photos is one of two that I found in late September at a site in the lowlands of southeastern Missouri. I’ve not seen the beetle at this site before, but I knew it must occur here because of the stands of false indigo that I noted during an earlier visit to the site. Considering the large number of plants present, two beetles is much less than I would have expected to see (in fact, both beetles were found in a single patch of goldenrod). I have previously featured this species (see A classic fall ‘bycid) from a site about 50 miles east of this one. At that site also only a few beetles were seen despite an abundance of larval host plants (but the adults occurring on snakeroot flowers instead of goldenrod). Only twice have I seen this species in numbers that I would consider plentiful (both times in western Missouri). 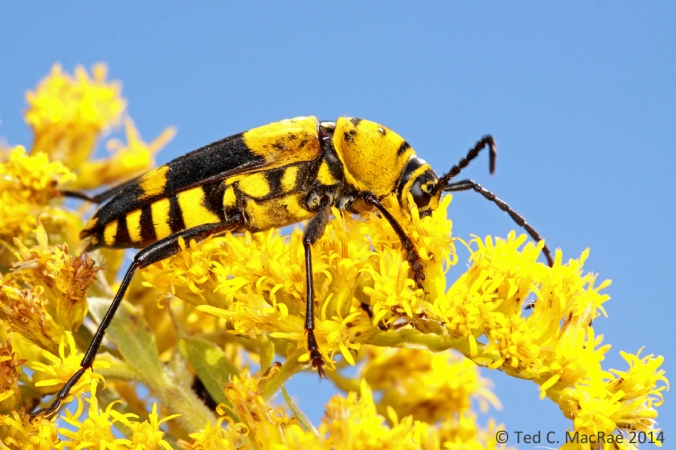 Amorpha borers and locust borers are part of a larger complex of black and yellow insects that visit goldenrod flowers in the fall. These include a variety of bees, wasps, and other beetles (e.g., the delta flower scarab, Trigonopeltastes delta—family Scarabaeidae), but perhaps the most abundant is the goldenrod soldier beetle, Chauliognathus pensylvanicus—family Cantharidae (also called the Pennsylvania leatherwing). One can presume that any or all of these species serve as models for the longhorned beetles—bees and wasps are obviously protected from most predators by their ability to sting, and the bodies of soldier beetles are chemically protected by cantharidin, a highly toxic terpenoid that causes blistering and irritation of mucous membranes at low doses and can be fatal at higher doses. As the mimics, amorpha borers and locust borers could be expected to be less abundant than the models. However, considering how difficult-to-see these beetles can be when sitting on goldenrod flowers, their black-and-yellow coloration seems as though it could just as easily serve a cryptic function. It is even possible that mimicry and crypsis both have contributed to evolution of these beetle’s coloration.

5 thoughts on “Amorpha borer on goldenrod”