For the past few years I’ve spent the summers traveling once a month or so from my home near St. Louis to research plots in western Tennessee. I enjoy these trips immensely—not only are my research and the colleagues that I spend time with fun, but I also get to keep an eye on the progression of the season in one of Missouri’s most interesting (and threatened) natural communities: the southeastern lowlands. Spring sees the emergence of an unusual population of the Festive Tiger Beetle (Cicindela scutellaris) in the area’s critically imperiled sand prairies; summer harks the appearance of the diminutive and almost-impossible-to-see Ant-like Tiger Beetle (Cylindera cursitans) in the ribbons of wet bottomland forest that line the Mississippi River; autumn is graced by the sight of stunningly beautiful amorpha borers (Megacyllene decora) in wet areas hosting mixed stands of false indigo (Amorpha fruticosa) and goldenrod (Solidago spp.); and all season long a variety of seldom-seen insects (e.g., longhorned beetles that look like stag beetles) are attracted to ultraviolet lights set up in the area’s increasingly scarce natural habitats. 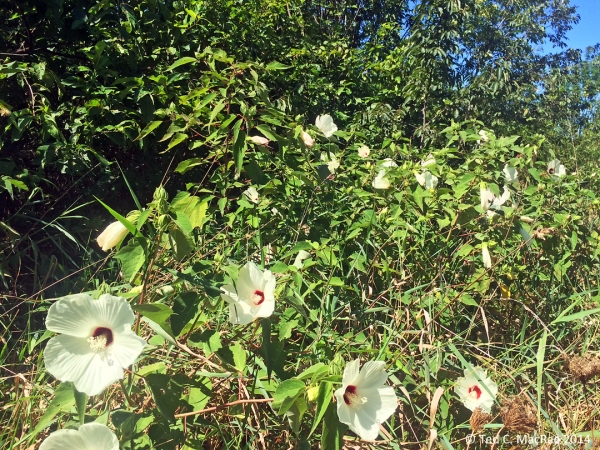 Another phenological event that I look forward to in the southeastern lowlands is the blooming period of hairy mallow (Hibiscus lasiocarpus). Starting in July and reaching its peak in early to mid-August, the enormous white (and sometimes pink) flowers explode across the landscape at a time when precious few other flowers can be found, conspicuously flagging any ground where water tends to stand. It is not the flowers themselves, however, that pique my interest, but rather a beautiful (and, until recently, rare) jewel beetle (family Buprestidae)—Agrilus concinnus—that becomes active on the plants while they are in flower. In fact, of the nearly 200 species belonging to the genus in North America, I consider A. concinnus to be perhaps the most beautiful! 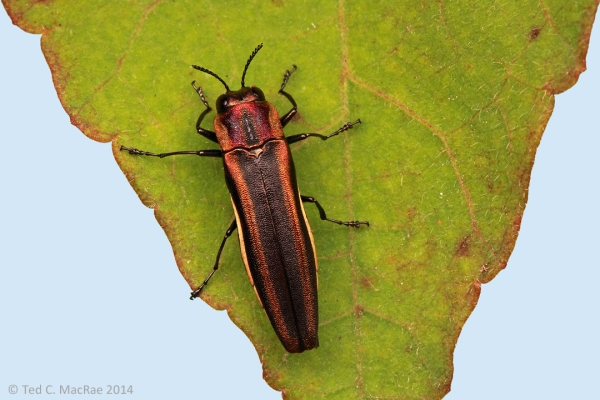 I first saw this species in Missouri’s southeastern lowlands nearly 30 years ago. At that time, I didn’t know that the mating pair that I had found on low vegetation represented a species considered to be one of the rarest of the genus in North America (having been recorded only from Florida, Georgia, Illinois, and Texas and not yet known from Missouri) and whose host plant and biology were completely unknown. Over the course of several years following this first find, fellow buprestophile Gayle Nelson (now deceased) and I were able to document the occurrence of this species also in Kansas (MacRae & Nelson 2003) and confirm its association with plants in the genus Hibiscus (MacRae 2006). We also determined that adults of this species exhibited an unusually late seasonal occurrence, peaking in late July and early August, compared to the spring adult activity period of most other eastern North American species in the genus. As a result of these efforts, one of North America’s rarest and least known jewel beetles was no longer regarded as either. A more detailed summary of my experiences with this beetle can be found in a newsletter article that I wrote a while back (MacRae 2004).

Plants in peak bloom signals the adult activity period of the beetle.

Of course, those were the days before I began photographing insects, so despite the abundance with which I have seen this species in past years, I still lacked photographs of it. I first made an effort to photograph adults two years ago while on one of my research plot trips, but 2012 was characterized by a severe drought in the central U.S.—precious few potential host plants were found at the locality where I first collected these beetles, and those that were present were severely stunted and in poor shape due to the drought. Conditions were much more favorable last year (2013), but again no beetles were seen during an early August visit. This past season was again favorable for growth of the host plants, and though my visit during early August again looked like it was not going to pay off, I eventually scared up an adult and watched it as it flew to another plant. I would see four adults on the day—not a lot, but enough to make sure that I got photographs showing how spectacularly beautiful they are!

Adults perch, mate, and feed on the upper leaf surfaces.

MacRae, T. C. & G. H. Nelson. 2003. Distributional and biological notes on Buprestidae (Coleoptera) in North and Central America and the West Indies, with validation of one species. The Coleopterists Bulletin 57(1):57–70 [pdf].