During last June’s collecting trip through the western Great Plains, we stopped at an interesting spot in northeastern New Mexico near the small town of Mills (Harding Co.). Mills itself sits smack dab in the middle of expansive shortgrass prairie; however, a few miles to the west the flat terrain gives way to a rugged, boulder-strewn sandstone canyon harboring oak-pine-juniper woodland. Welcome to Mills Canyon, which descends almost 1,000 feet to the Canadian River below. 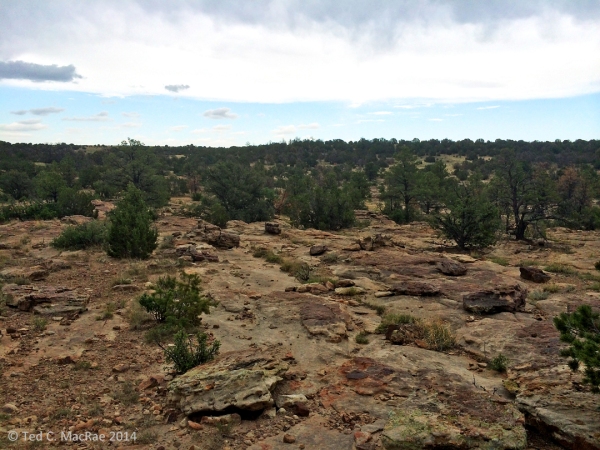 Our quarry for the trip was longhorned beetles in the genus Prionus, especially those associated with grasslands in the central U.S., and while searching the area for suitable grassland-Prionus habitat we chanced upon this spot. Though not the grasslands we were searching for, the area looked interesting enough that we decided to stop and do a little beating. We were immediately rewarded with several interesting finds and decided to come back the next day when we had more time to spend. That was a good decision, as apparently the timing was perfect and we collected perhaps a dozen or more species of jewel and longhorned beetles.

Perhaps the most interesting of the day’s catch was a single individual representing the jewel beetle Phaenops piniedulis. Though widespread across the southwestern U.S. (records exist from Arizona, California, Colorado, Nevada, New Mexico, Oregon, Utah, and Texas), it is nevertheless only rarely encountered, often no more than a few individuals at a time. As the name suggests, the species was originally associated with pinyon pine (Pinus edulis) (Burke 1908), although it has also been reared from California foothills pine (P. sabiniana), Jeffrey pine (P. jeffreyi), and single-leaf pinyon (P. monophylla) (MacRae & Nelson 2003). The species is distinguished from other several other North American species in the genus by the large yellow maculations that cover more than 50% of the elytral surface (Sloop 1937). These beetles are closely related to the so-called “fire beetles” of the genus Melanophila, the latter famous for their attraction to the smoldering and even still-burning wood of forest fires. However, Phaenops lack the large heat-sensing pores found on the metathorax of Melanophila and, thus, do not exhibit such behavior.

The photo above is not a true field photo, as I encountered the beetle on my beating sheet after whacking a dead pinyon pine branch. Rather than risking escape, I popped it into a vial for safekeeping and later that evening (when it was cooler) placed it on a pinyon twig for photographs. Even then it was still rather active, and the photo shown here is really the only decent photograph I obtained of the beetle. This turns out to be a rather significant photo, for as far as I can tell it is the only photograph of the species—live or dead—to be found on the internet!

MacRae, T. C. & G. H. Nelson. 2003. Distributional and biological notes on Buprestidae (Coleoptera) in North and Central America and the West Indies, with validation of one species. The Coleopterists Bulletin 57(1):57–70 [pdf].