One of the more impressive insects that we found during our visit to Sand Hills State Park in south-central Kansas last June was Plectrodera scalator, the cottonwood borer. Large and robust (in fact, the only larger species in the family are the prionid root borers and their kin), their striking checkered pattern of white pubescence on a glossy black body makes them perhaps the most recognizable of all North American longhorned beetles (Linsley & Chemsak 1984). The very robust body of this individual, along with the relatively shorter antennae (only about as long as the body) identify it as a female—males are generally smaller and less robust with the body slightly tapering and the antennae distinctly longer than the body. 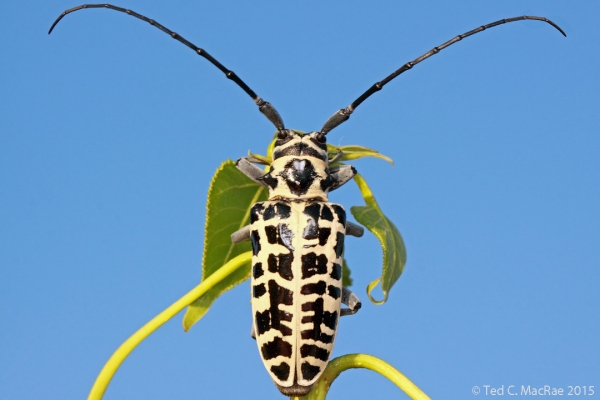 The white coloration on the body of these beetles is not a cuticular pigment (which is rather rare in beetles and is most often associated with species found in white sand habitats, e.g., certain tiger beetles), but instead a result of dense mats of microscopic white setae. The patterns formed by these mats are apparently as unique to each individual as fingerprints are to humans (Yanega 1996), making these beetles at once immediately recognizable as a species yet distinctive as individuals. 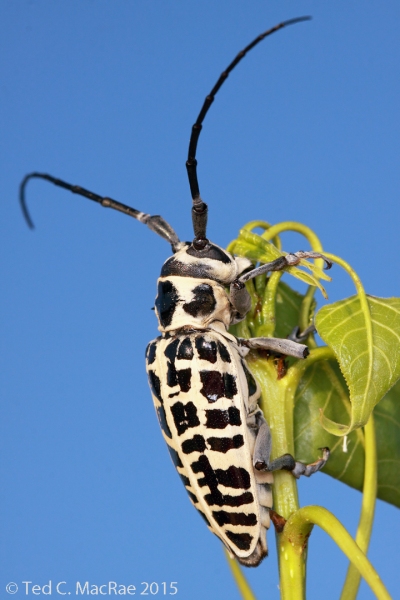 Adults of this species are found most often on cottonwood.

These are said to be common beetles in their range across the eastern two-thirds of the country, especially so in the Great Plains where their favored host, cottonwood (Populus deltoides), is especially abundant. Despite this, I have encountered this species only a handful of times in more than 3o years of searching. I know they’re out there, even in my home state of Missouri where I recorded 154 specimens collected in the state and deposited in various collections (MacRae 1994). It was not until around 2000 that I even saw my first ones (on a cottonwood tree in a homeowner’s yard just across the Mississippi River in Illinois), and in fact this one was actually found by Mary Liz Jameson, who had accompanied us to the field that day. It makes me wonder if their coloration, so strikingly conspicuous when isolated against a clean, blue sky background, might actually afford some type of cryptic protection against the normal backdrop of foliage and branches on which they are normally found—a phenomenon that I call “conspicuous crypsis” and which I have noted for other longhorned beetles (e.g., Acanthocinus nodosus). Perhaps, with this species at least, I have not yet set my search image to notice them. 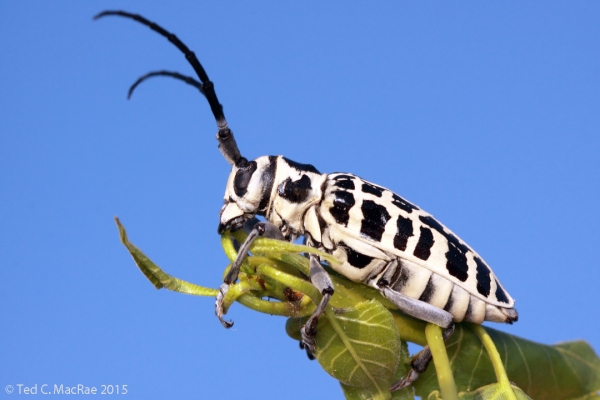 Large, robust size and a distinctive checkered pattern of black and white makes these beetles among the most recognizable longhorned beetles in North America.

Linsley, E. G. and J. A. Chemsak. 1984. The Cerambycidae of North America, Part VII, No. 1: Taxonomy and classification of the subfamily Lamiinae, tribes Parmenini through Acanthoderini. University of California Publications in Entomology 102:xi + 1–258. [preview]