In my last post, I discussed Cicindela scutellaris rugata, the so-called “wrinkled fetiger beetle” (Erwin & Pearson 2008)—one of several geographically restricted subspecies of a more widespread and geographically variable species. This was not the only goal of the day, however, as I was also hoping to see a second geographically restricted subspecies—Cicindela formosa pigmentosignata, the “reddish-green sand tiger beetle (Erwin & Pearson 2008). The parent species of these two species show remarkably similar patterns of distribution, habits, and diversification—both occur most commonly as nominotypical subspecies in the Great Plains but have also expanded eastward and diverged there and around the periphery of their range into a number of distinctive subspecies; both favor deep, dry sand habitats without standing water; and both exhibit a “spring/fall” life history where sexually immature adults emerge in fall, pass the winter in burrows, and emerge again in spring ready to mate and lay eggs. In fact, these two species are so inextricably linked to each other that throughout most of their range, where one is found usually so is the other, and where one is represented by a distinctive subspecies so is the other. The main exception to this is in the far southeastern U.S., where C. scutellaris has established as the subspecies C. s. unicolor in sandy forest openings but C. formosa has not. 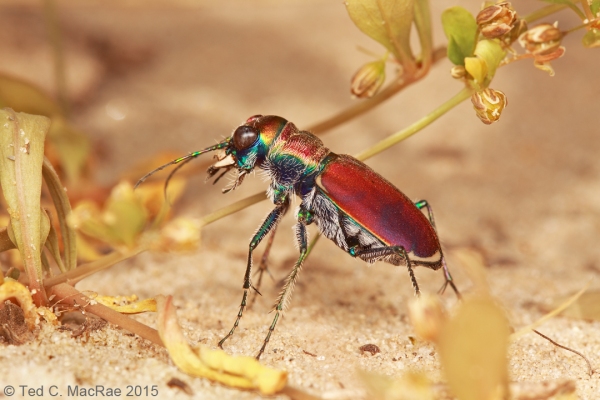 Adults commonly exhibit “shade seeking” behavior during the hotter parts of the day.

As with C. s. rugata, I found this subspecies in a couple of old, rural cemeteries in eastern Texas (Henderson and Van Zandt Counties)—the photos shown here are from the second locality and were taken during the afternoon in the heat of the day. Because of this the beetles were quite wary and difficult to approach, but they also exhibited much more photogenic behaviors related to thermoregulation such as stilting and shade seeking. As I stalked the beetles through the deep, dry sand trying to get photographs, I was reminded yet again of why I love this species of tiger beetle so much—their bulk; their bulging eyes; their long, looping escape flights that end with a comical bounce and tumble, only to end up on their feet and facing their pursuer. These beetles are loaded with personality and behavioral charisma, and this particular subspecies with its brilliant and almost completely immaculate reddish-purple elytra and vividly contrasting blue-green legs and sides was an especially treasured sight to behold (especially after failing in my first attempt to find it back in 2012).

“Stilting” is another thermoregulatory behavior designed to raise the body up off the hot sand.

I am reasonably satisfied with these photos, although I would have liked to have gotten at least one without some part of the beetle obscured by foliage. That said, I now prefer some foliage in my tiger beetle photos, as I think it adds a bit of perspective, and when it is in the context of thermoregulatory behavior so much the better. And so, having now gotten good field photographs of this subspecies I am motivated more than ever to return to the Mescalero Sand Dunes in New Mexico and find and photograph C. f. rutilovirescens to complete my photographic “collection” of subspecies of the sand tiger beetle. Of course, by then I will probably be sufficiently dissatisfied with my existing photos of the other subspecies (already so with those of C. f. gibsoni due to excessively cropped compositions) that I will want to do the same with each of them as well. Such is the curse—and the blessing—of the insect photographer!

Ted C. MacRae is a research entomologist by vocation and beetle taxonomist by avocation. Areas of expertise in the latter include worldwide jewel beetles (Buprestidae) and North American longhorned beetles (Cerambycidae). More recent work has focused on North American tiger beetles (Cicindelidae) and their distribution, ecology, and conservation.
View all posts by Ted C. MacRae →
This entry was posted in Coleoptera. Bookmark the permalink.