This month’s destination for the WGNSS Natural History Photography Group was Orchid Valley Natural Area in Hawn State Park. This natural area is south of the main park and not normally open to the public, but we were granted permission to enter by the park administration. Our targets were several species of orchids and other rare plants that are known to occur in the area—showy orchis (Galearis spectabilis) being the one I hoped most to see. 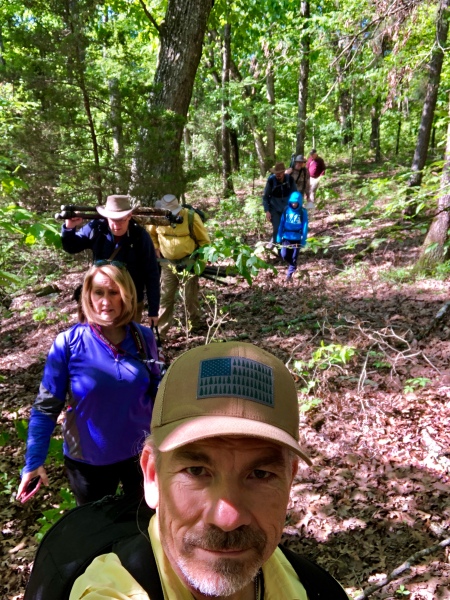 There are no trails here—not even a place to park, as we squeezed our cars against the side of the road at a spot that appeared to provide good access. A bit of GPS-guided bushwhacking brought us to increasingly rough and sloping ground that ended up at the edge of a cliff overlooking one of the sandstone box canyons that this area is know for—down below was where we wanted to go. Wild azaleas lined the upper canyon edges with their stunning pink blossoms. We followed the canyon edge and found a way down, then circled back into the canyon to find a stunning waterfall, its sandstone walls dripping with mosses and ferns. We spent quite a bit of time here photographing the waterfall and surrounding area before eventually resuming the search for the orchids that we came to see. 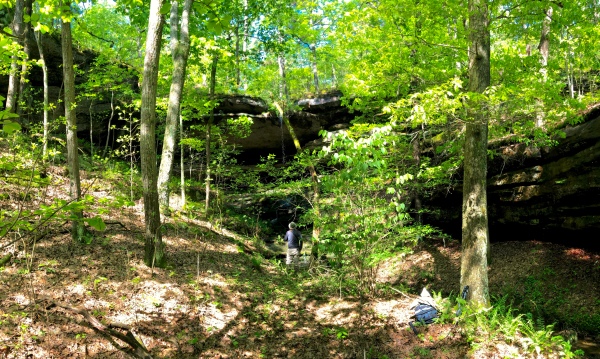 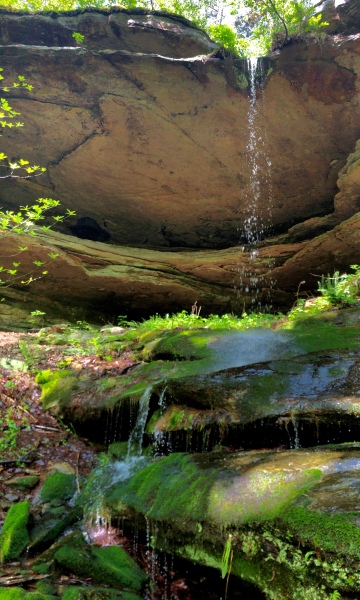 Sadly, the orchids were not yet in bloom—not even close, another victim of the cold, late spring we’ve been experiencing. Casey, our group leader, did find some very small showy orchis leaves, and we saw some nice clumps of another native orchid, rattlesnake plantain (Goodyera pubescens), an evergreen orchid that blooms during late summer. We hiked up another drainage that led to another box canyon—lacking a waterfall but equally impressive, nonetheless—but found no orchids in bloom there, either. We did, however, see cinnamon ferns sending up their spike-like fertile fronds and aggregations of antlion larvae (a.k.a. “doodlebugs”) in the soil beneath the sandstone ledges.

You might think failure to find what we were looking for would result in a disappointing field trip—far from it! Time in the field with like-minded friends in a beautiful spot is always a pleasure, and when it comes to searching for rare plants (or insects, or whatever), failure is the norm—making success, when it does come, that much sweeter. There will be other chances to see showy orchis (perhaps in a couple of weeks).