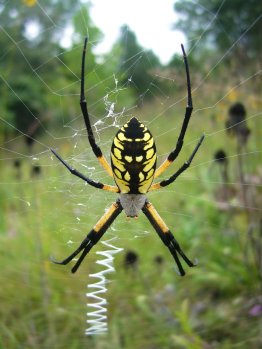 There are five North American species of Argiope, of which two occur broadly across the eastern U.S. Argiope aurantia can be distinguished from Argiope trifasciata (banded garden spider/argiope/orbweaver) by the zig-zag pattern of the stabilimentum of the former and the transversely striped abdomen and spotted legs of the latter.

Despite its name, the function of the stabilimentum (reinforced area in the middle of the web) remains controversial. The idea that it somehow adds stability to the web is not given much credence today. A visual function seems much more plausible, especially when considering that only diurnal spiders make such structures. Possibilities include camoflauge for predator avoidance, the seemingly opposite idea of increased visibility to prevent accidental destruction of the web by birds or large animals, and even prey attraction through enhanced reflection of ultraviolet light. Stabilimenta in different spider lineages probably evolved independently and may have different or even multiple functions.