For the first post of 2009, I begin with a look back at some of my favorite photos from 2008 (idea stolen from Alex Wild and others).  I initially hesitated to do a “best photos” post since I’m not really a photographer – just an entomologist with a camera.  Nevertheless, and with that caveat in mind, I offer ten photos that represent some of my favorites from this past year. To force some diversity in my picks, I’ve created “winning” categories (otherwise you might just see ten tiger beetles!). Click on the photos to see larger versions, and feel free to vote for your favorite. If so, what did you like about it? Was there a photo I didn’t pick that you liked better?  Enjoy!

From “All the better to see you with, my dear!” (September 2008).  Picking a top tiger beetle photo was tough with so many to choose from.  Ultimately, I decided I really like these face-on shots, and of the several I’ve posted this one of Cicindela formosa generosa has the overall best composition, balance and symmetry.  I considered this one of Cicindela formosa formosa – with its half-cocked jaws, it probably has better personality.  However, the one above got the final nod because it is a true field shot of an unconfined, unmanipulated individual.

From Buppies in the bush(veld) (December 2008).  Although taken back in 1999, I just recently scanned and posted this photo of Agelia petelii from South Africa.  I like the bold, contrasting colors of the beetle combined with the soft colors of the host foliage.  Runners up included these photos of Evides pubiventris with its sumptuous iridescent green blending beautifully with the green background (but suffering slightly from shallow depth of field) and Chrysobothris femorata with its intricate surface sculpturing. 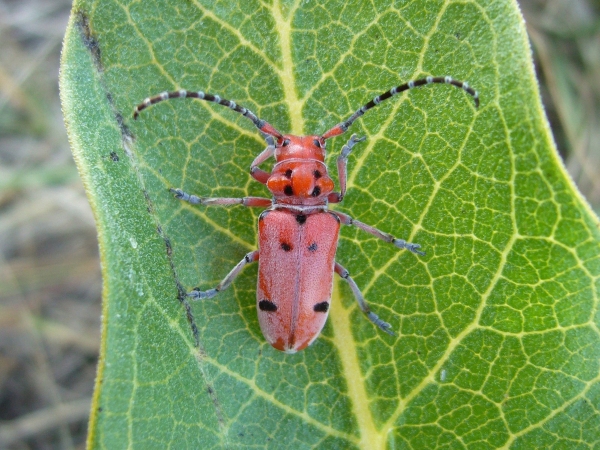 From Rattled in the Black Hills (September 2008).  This was an easy choice – none of the other longhorned beetle photos that I posted during 2008 matched this photo of Tetraopes femoratus for clarity, composition, and the striking contrast between the red color of the beetle and the green color of the host plant.  I especially like the detailing of the body pubescence.

From Magnificently Monstrous Muscomorphs (November 2008).  I do like other insect besides beetles, and robber flies are hard to beat for their charisma.  This photo of Proctacanthus milbertii (which, as Chris Taylor pointed out, literally translates to “Milbert’s spiny butt”), has great composition and nice, complimentary colors.  I like contrast between the fine detail of the fly and the soft background.

From Happy Halloween! (October 2008). I didn’t have many non-insect arthropod photos to choose from, but this photo of a female Argiope aurantia (yellow garden spider) would be deserving of recognition no matter how many I had to choose from. I like the bold, contrasting colors and symmetry of the spider in front of the dappled background of this photo.

Another one from Rattled in the Black Hills (September 2008).  This is admittedly not the best photo from a purely technical perspective – it’s a little out of focus, and the color is a bit off.  However, no photo could better convey the moment – confronted with a live, angry prairie rattlesnake (Crotalus viridis) (among the more aggressive species in the genus).  The forked tongue and rattle – blurred in motion – were icing on the cake.

From Glades of Jefferson County (July 2008).  I had several wildflower closeups to choose from, but I kept coming back to this field shot of pale purple coneflower (Echincea simulata) and Missouri evening primrose (Oenethera macrocarpa).  The eastern redcedars (Juniperus virginiana) in the background are at once indicative of their preferred habitat (limestone/dolomite glades) and also testament to their threatening encroachment.

From the very simply and aptly named Lake Tahoe, California (March 2008).  Incense cedar (Calocedrus decurrens), with its reddish, deeply furrowed bark and great height, is one of the most majestic of western conifers.  I was captivated by this tree – beautiful even in death and contrasting nicely with the surrounding green foliage.

From Pipestone National Monument (April 2008).  “Old Stone Face” is one of Pipestone’s most recognizable geologic features, and the short angle of the sun on this early spring day provided nice detail to the cracks and fissures of the rock – almost appropriately adding a weathered “age” to this old man.

Another one from Lake Tahoe, California (March 2008).  Few places on earth are more photogenic than Lake Tahoe, and this perspective overlooking Emerald Bay is among the finest views I’ve seen.  Brilliant blue skies and majestic snow covered mountains reflected perfectly from the still surface, with Fannette Island providing a perfect focal point for the photo.

From Ozark Trail, lower Trace Creek Section (December 2007).  While technically not a 2008 photo, it’s close enough.  This was one of the first macro photographs I took with my camera, and it remains one of my favorites.  A chance occurence of an unlikely subject, created by cold temperatures and heavy moisture-laden air. I like the contrast between the water drops – sharp, round, and clear – with the vertical shapes of the leaf petioles and background trees.  Viewing the image full-sized reveals the reflection of the photographer in the leftmost water drop.

Subsequent edit: Okay, so after I put this post together, I realized I actually featured eleven photos – too much difficulty choosing, I guess. Let’s call it a baker’s ten.