Insects are not only the most diverse group of animals in the world, they are also among the most beautiful.  Beetles, of course (with apologies to any lepidopterists that may be reading this), are responsible for a hefty slice of this majestic diversity, with the most spectacular of these belonging primarily to a few select families.  Longhorned beetles, who combine vibrant colors with grossly elongated antennae and legs.  Scarabs, upping the anty by sporting a monstrously wonderful array of horns or just sheer size to go along with their bright colors.  Tiger beetles, whose elaborate designs and vivid colors are further augmented with toothy-jawed, behavioral charisma.  Yet, it is the Buprestidae upon which the moniker “jewel beetles” has been bestowed, despite their lack of obvious morphological gimmicks – a testament to their bright, sparkling, even gaudy colors and exquisite surface sculpture. 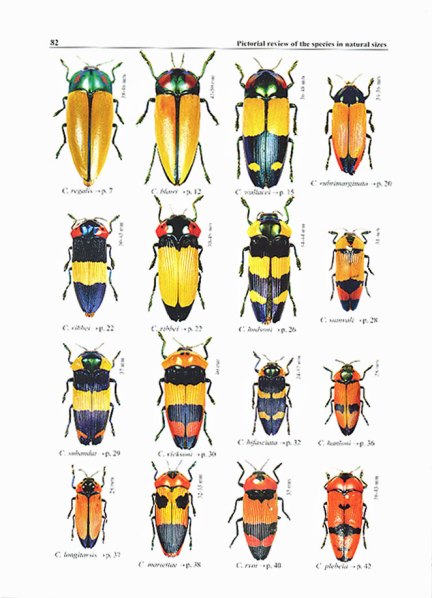 Some of the most beautiful buprestids in the world are found in the rainforests of southeast Asia, Indonesia, New Guinea and northern Australia.  Genera such as Catoxantha, Chysochroa, Megaloxantha, and Chrysodema come to mind – big, beautiful beetles with screaming iridescence of green, red, yellow and blue.  Living jewels!  These and related genera comprise the great tribe Chrysochroini – the “classic” jewel beetles.  Not as well known but perhaps even more spectacular than the chrysochroines are two genera with strictly Australasian affinities – Calodema (left) and Metaxymorpha (below).  These two genera are the subject of a review authored by Swedish entomologist Ulf Nylander and published in the journal Folia Heyrovskyana by Kabourek.  This gorgeously printed, copiously illustrated, and handsomly bound volume is as much a work of art as it is a technical review.

Calodema and Metaxymorpha are among several genera comprising the tribe Stigmoderini in the subfamily Buprestinae.  Six genera, including Calodema and Metaxymorpha, are strictly Australasian, while another five genera are of southern Neotropical occurrence.  This now-disjunct tribal distribution suggests an origin on Gondwana prior to its break up beginning about 167 million years ago during the mid-Jurassic.  Calodema and Metaxymorpha are restricted to New Guinea and its associated islands and the northern and northeastern coastal areas of Australia.  The two genera share certain features that distinguish them from other stigmoderines, notably elongated mouthparts adapted to feeding on nectar and a streamlined, aerodynamically-shaped body with the prosternum (ventral sclerite behind the head) curiously prolonged into a large conical process.  Nylander discusses the possible function of this process in serving as a ballast to help stabilize the flight of these large beetles as they fly through branches and other obstructions in the upper forest canopy searching for flowers on which to feed.  This thought is based on the observation that adult beetles dropped from any angle are able to quickly right themselves and fly away before hitting the ground, while stigmoderines in other

genera – lacking the prosternal process – more often drop to the ground and feign death (presumably an adaptation for predator avoidance in the more open environments where they occur).  Calodema and Metaxymorpha are clearly related to each other but are distinguished by the smaller scutellum and nonoverlapping elytra of Calodema versus larger scutellum and distinctly overlapping elytra (in the apical area, usually left over right) of Metaxymorpha.

Fifteen species of Calodema and 18 species of Metaxymorpha are recognized, with comparative tables, figures, and keys provided to differentiate the species and species groups within each genus.  Four species are described as new, including Calodema hanloni, C. longitarsis and Metaxymorpha alexanderiensis from Papua New Guinea, and M. hanloni from Australia.  Species treatments include synonymies, information on type specimens and type localities, label data for specimens examined, detailed descriptions, and comments on distribution and flight periods when known.

High quality, full color photographs are provided for every species.  In many cases, multiple specimens are illustrated to show the degree of intraspecific variation encountered in the specimens studied, as shown in the examples included here for Calodema ribbei (above) and Metaxymorpha nigrofasciata (right).  These fabulous plates would almost be enough to justify ‘coffee table book’ status, were it not for the decidedly technical nature of the text itself.  Lest you think this makes for a strictly dry read, there are additional comments for several species regarding historical localities and collection circumstances.  One of the more fascinating is this passage for Calodema vicksoni from Papua New Guinea:

The holotype was captured by a native lady who found this specimen feeding on flowers near her house in the jungle in a very remote location in the Owen Stanley Range.  She caught the beetle and gave it to her husband.  Sadly enough, shortly afterwards she was bitten by a Papuan Blacksnake and died.

The morbid origins of this species become even more gruesome, as Nylander further explains that the species was named to honor the memory of the late Vickson Kotaseao – an associate at the Wei Institute in Papua New Guinea who was the first person to discover the larva of Calodema, and who was later brutally murdered in an ambush while on duty.  The book concludes with a summary of the meager biological information recorded for species of Calodema and Metaxymorpha, including observations of larvae presumed to be Calodema ribbei and their host tree.  As a special bonus, the book comes with a DVD that includes videosequences of adults of several species (Calodema regalis, C. blairi, C. ribbei, C. hudsoni, Metaxymorpha nigrosuturalis, and M. meeki) feeding on their flower hosts in the Australian and Guinean rain forests.  While the color photographs in the book are truly stunning, seeing these beetles on video emphasizes their true spectacularity as living, behavioral creatures and not just dead, pinned specimens.

This book is a beautiful assemblage of all that is currently known about some of the world’s most gorgeous beetles.  Sadly, it also emphasizes just how incomplete that knowlegde really is.  Of the 33 species now recognized in these two genera, 20 of them (60%) have been described in just the past 15 years, and virtually nothing is known of the biology of the vast majority of them.  Seven species are known from just a single specimen, and several more are known by only a very small handful.  In an age where advanced molecular genetic techniques offer great promise for unlocking stores of knowledge about evolutionary relationships among earth’s biota, Calodema and Metaxymorpha offer a sobering reminder that there is still much to do in the less glamorous world of alpha taxonomy.  As noted by Nylander, the center of diversity for these spectacular buprestids appears to be in the Papua New Guinea central highlands – primary rain forests that are increasingly threatened by both legal and illegal logging.  To destroy such a biodiversity “hotspot” would be a sad legacy to leave – but to destroy it without even knowing what was there to begin with would be simply shameful.

I thank Ulf Nylander for granting me permission to scan and post these gorgeous plates, representing but a few of the many beautiful illustrations that can be found in his book.