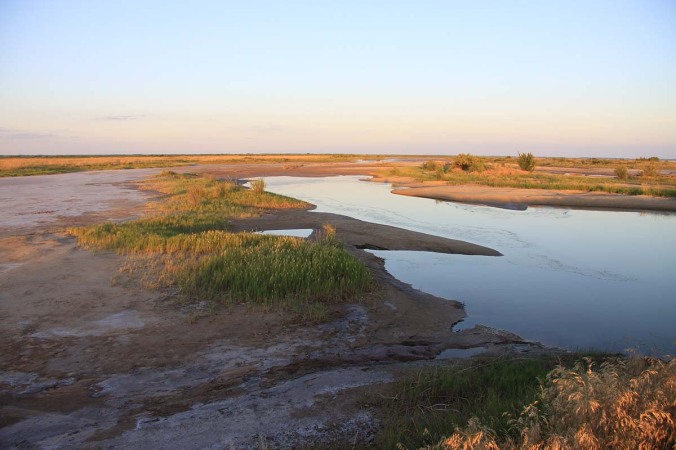 I’ve written quite a few posts about my June trip to northwestern Oklahoma. Four days at the ruggedly scenic Four Canyon Preserve and nearby Packsaddle Wildlife Management Area yielded a few interesting jewel beetles (though not many tiger beetles), but the followed two days in the red clay/gypsum hills just north of there were as successful a two-day period as I’ve ever had, with new localities for Cylindera celeripes (swift tiger beetle) and true field photographs of Dromochorus pruinina (frosted dromo tiger beetle¹). The next day was spent at nearby Salt Plains National Wildlife Refuge, just east of the red clay hills in Alfalfa Co. Salt Plains is best known for its Selenite Crystal Dig Area, where an estimated 30,000 annual visitors dig for Oklahoma’s State Crystal with its unique hour glass-shaped inclusion (the only known site where these crystals are found). A dominant feature of the refuge, however, is its 10,000 acre saline flat – left behind by the vast Permian seas that once covered the interior of the continent and the largest such salt flat in the Great Plains.  It was this feature that drew my interest. 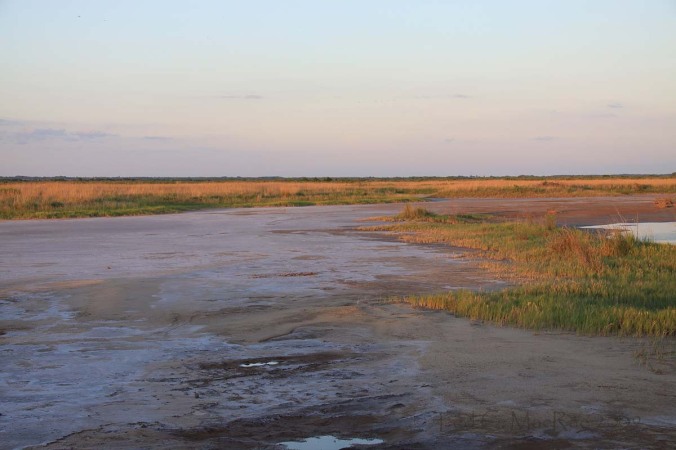 I first visited Salt Plains a few years ago when fieldmate Chris Brown and I were near the end of a rather unproductive (yet still enjoyable) fall tiger beetle trip to the nearby Gypsum Hills of south-central Kansas (Cicindela pulchra had eluded us – for the time being!).  We noted the refuge on the map and decided to take a look – becoming instantly enamoured with the diversity of tiger beetles seen running on its barren, salt-encrusted mud flats.  I returned the following fall with long-time fieldmate Rich Thoma and Hardtner, KS resident “Beetle Bill” Smith, who introduced us to the refuge biologist so we could get permits to do some proper collecting.  Most of the tiger beetles we saw were widespread and familiar to me – Cicindela species proper such as C. formosa formosa (big sand tiger beetle), C. tranquebarica (oblique-lined tiger beetle), C. punctulata (punctured tiger beetle), and C. repanda (bronzed tiger beetle), but it was the creamy white Eunota togata globicollis (alkali tiger beetle) that had me swiping my net for the next hour or two.  Sadly, those were in my pre-photographer days, so I have no visual record of that species other than the pinned specimens in my collection.

My visit during this trip was completely unplanned.  After the mid-week’s thunderstorms chased me back to this part of the state, I thought this would be a nice contrast to the red clay/gypsum hills where I saw C. celeripes and D. pruinina.  In addition, the selection of tiger beetles active on the saline flats during this summer trip would likely be quite different from the fall/spring species I had seen on my previous two visits.  Trouble was, the unplanned nature of the visit also meant that I didn’t have a permit, but I was prepared to limit my activities to only photography in case I was unable to convince the refuge staff to renew my prior permit.  That eventuality was unnecessary, however, as the refuge biologist located my permit in a gray, dusty file cabinet and graciously typed up a new permit for me – good until next summer!  With that, I was off to SandPiper Trail and seven hours of stalking, netting, and photographing.  Some familiar faces were there again – C. formosa, C. repanda, C. punctulata, and C. tranquebarica (as they are almost everywhere), but I also encountered three beautiful species that I had not seen there before (one of which I had never seen previously).  Like E. togata, each of these species is an alkaline habitat specialist that makes its living only in these harsh, saline environments. They were not the easiest species to photograph, easily alarmed in the heat of the day, but the vast open spaces allowed me to follow their escape flights with relative ease, and one-by-one they gradually became accustomed to my presence and eventually allowed me to get at least one or two good shots. 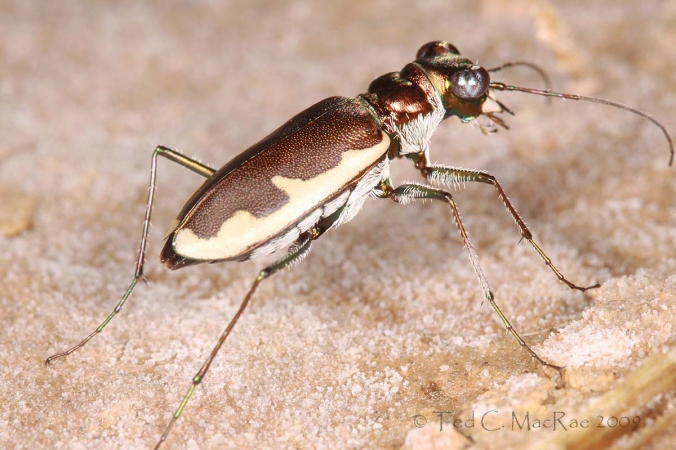 Along with E. togata globicollis, these species bring the total number of species that I’ve observed at Salt Plains to eight – quite a hyperdiversity given the very small portion of the refuge that I’ve explored during my three visits.  Willis (1967) has observed as many as 11 species in a single habitat, and while this may seem to violate the principle of competitive exclusion (limiting the number of species that can occupy a given niche), careful observation reveals small but distinct partitionings of this harsh environment by the different species.  For example, C. fulgida was seen in the drier, more vegetated fringes around the flats, E. nevadica knausii was observed in moist, open areas near the water’s edge, and H. circumpicta johnsonii was more generally free ranging across the open salt surfaces.  Temporal separation combines with spatial separation to further subdivide the habitat – the latter two species occur as adults during summer, while E. togata globicollis and C. fulgida adult occurrence is primarily during spring and fall (the individual I saw was likely a stragler).  I have noted the same phenomenon with species occurring in clay habitats here in Missouri, with as many as six species seen at a single highway intersection in the White River Hills a few years ago.