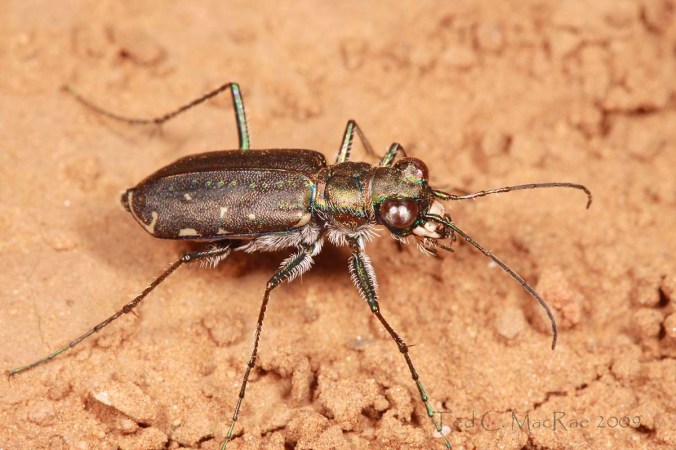 Back in early June as I began my exploration of The Nature Conservancy’s Four Canyon Preserve in northwestern Oklahoma, one of the very first insect species that I encountered was Cicindela ubiquita¹ (the ubiquitous tiger beetle).  This ubiquitous species is restricted to nearly the entire North American continent and is found only in just about any habitat you can imagine.  It seems to especially favor wet or dry areas in lowland or upland habitats with little or lots of vegetation.  At Four Canyon Preserve, it showed a distinct preference for dry upland sand and clay sites and wet bottomland sand sites.  I did not find it in wet bottomland clay sites – probably because no such habitat exists within the preserve.

¹ Originally described as Cicindela punctulata (punctured tiger beetle) by Olivier (1790).  This name has been accepted by virtually all subsequent authors and is still used in such recent works as Freitag (1999), Pearson et al. (2006), and Erwin and Pearson (2008). 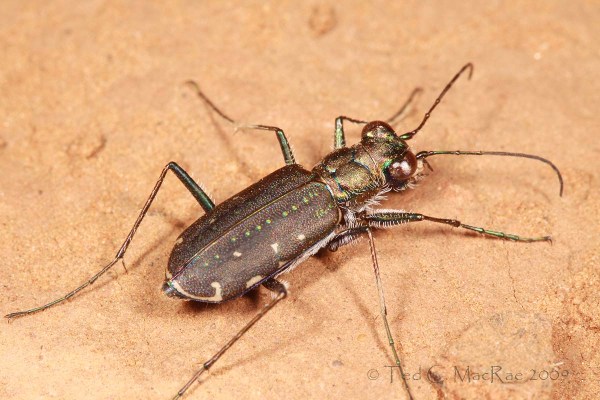 I had seen this species previously in Missouri on just about every collecting trip I’ve ever taken within that state.  Populations in Missouri seem to look exactly like the population here at Four Canyon Preserve but favor other habitats, including lawns, soybean fields, any dirt road, gravel parking lots, and cement sidewalks (although I have so far failed to find larval burrows in the latter, suggesting a greater level of habitat selectivity during the larval stage).  Based on examination of specimens in both my collection and that of the Enns Entomology Museum at the University of Missouri-Columbia, I can’t seem to find any county in Missouri where this beetle does not occur. 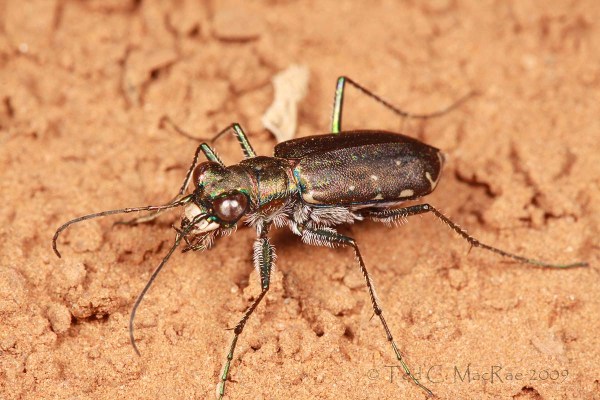 An interesting feature of this species is that its adult activity period seems to exclude the winter months.  Thus far, I have only succeeded in finding active adults during those months when temperatures routinely surpass the freezing point (April through November).  It also apparently has been unable to colonize the Pacific Coast of North America – the reasons for this extreme selectivity will remain unclear until further research can be done.

Despite the common usage of the name Cicindela punctulata for this species, the following quotes are offered to support my contention that the valid name of this species should be Cicindela ubiquita:

This species and C. repanda are the most common and ubiquitous in the state. — Graves (1963).

… this same pond were the ubiquitous C. repanda Dejean and C. punctulata Olivier. — Charlton and Kopper (2000).

23 thoughts on “The ubiquitous tiger beetle”