While hiking the middle stretch of the Ozark Trail’s Wappapello Section, my friend Rich and I witnessed a bounty of crystallofolia, or “frost flowers”.  These fragile, yet exquisite formations are, of course, not flowers at all, nor are they true frost (which forms directly from water vapor without first condensing), but rather are thin layers of ice that form as water is drawn from cracks in plant stems and freezes upon contact with cold air.  As the water continues to be drawn from the plant by capillary action, newly forming ice pushes older ice further out, creating delicate, folded, curling ribbons of ice that resemble many-layered flower petals.  Air trapped within the ice upon freezing imparts a frothy white appearance.

Frost flowers are not an uncommon phenomenon, and I have seen them on more than a few occasions during my frequent off-season hikes.  However, never before had either Rich or I seen the numbers that we saw during our hike on this, the second day of the New Year.  Frost flowers are normally encountered during the first hard freezes of fall when the ground is not yet frozen.  Water in the stems of certain plants expands as a result of the freezing air temperatures, causing vertical cracks to form along the length of the stem through which the ice ribbons are extruded. The formations are rather ephemeral, usually melting or sublimating away by late morning in fall’s typically mild daytime temperatures.  As fall progresses to winter, water stores in the plant stems become depleted after several freezes or locked up when the ground itself freezes, and as a result frost flowers are rarely seen later than December in Missouri. However, it has been a wet and mild fall and early winter, and after an extended period of moisture during December, Missouri was finally gripped by a severe cold spell with lows in the single digits and daytime highs remaining down in the teens and 20s.  The saturated, yet unfrozen ground provided a good source of moisture for plant stems to draw upon, and continuous subfreezing air temperatures allowed frost flowers to persist throughout the days and attain remarkable size. The photo above was taken in late afternoon as a sinking sun shone brightly on the west-facing slope where this formation was seen, persisting in all its fragile glory.

In Missouri, frost flowers are primarily associated with dittany (Cunila origanoides), species of Verbesina (V. virginica, white crownbeard; and V. alternifolia, yellow ironweed), and camphor weed (Pluchea camphorata).  Frost flowers are rarely seen on any other plant in Missouri, and I don’t know what it is about these plants and not others that make them suitable for frost flower formation.  Dittany is a daintly little member of the Lamiaceae, and as such has square stems – perhaps the angles on the stem are prone to splitting.  However, there are many other lamiaceous plants and non-lamiaceous square-stemmed plant species in Missouri that do not form frost flowers.  Likewise, Verbesina and Pluchea belong to the Asteraceae and do not have square stems.  They are, however, larger, more robust plants with thick, pithy stems that may be capable of holding a large amount of water and mature late in the season after most other plants have already dried up, perhaps allowing them to retain sufficient moisture in the stem late enough in the season to allow frost flower formation when conditions are right.  The majority of the frost flowers we saw were on dittany – dainty, delicate, fragile formations 2-3 inches across. However, at the end of the hike, as we were exploring the area around the parking lot, we found a stand of Verbesina (I suspect V. alternifolia), with which some of the most enormous and robust frost flowers that I have ever seen were associated.  Following are additional views of some of the more impressive formations we saw and the plants they were associated with. 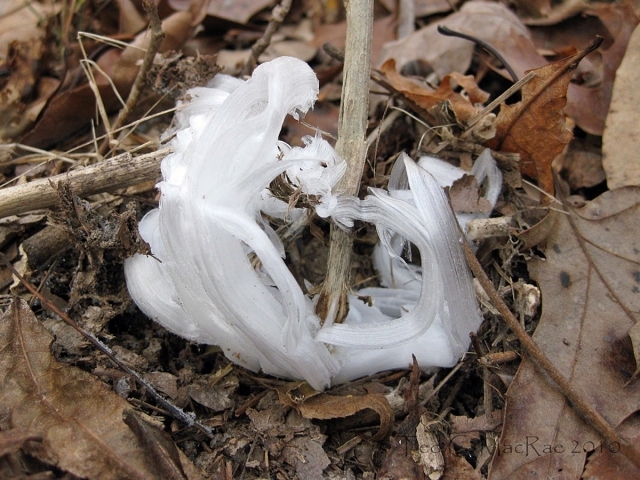 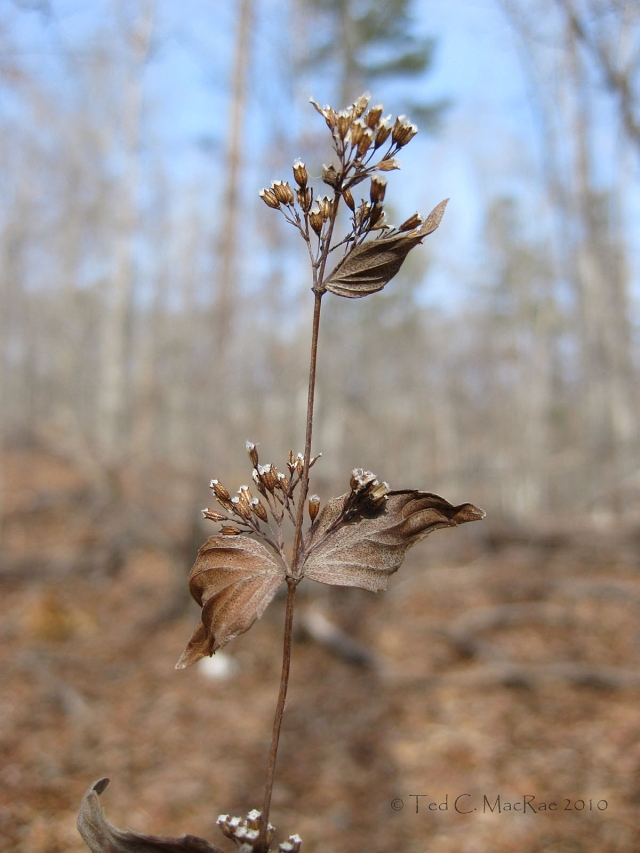 Verbesina sp. frost flowers were enormous - this one was approx. 5 inches wide. 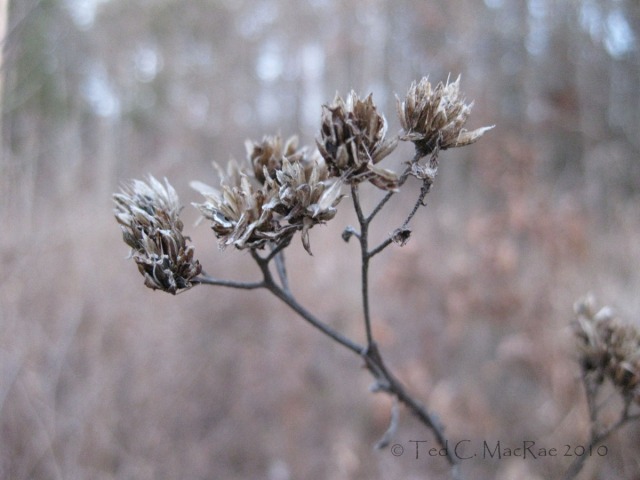