A matter of diffusion

In my Best of 2009 post, I mentioned four skills that, to me, seemed to be crucial for becoming a successful insect macrophotographer: 1) composition, 2) understanding lighting, 3) knowing how to use a flash, and 4) knowledge of the subject.  Of these, I’m most comfortable with the last – three decades of insect study have given me the chance to observe a tremendous diversity of insects in a variety of situations and habitats.  Many species are located only through understanding of their haunts and habits, and the ability to capture them relies upon successful approach techniques.  Collecting insects has been excellent preparation for photographing them.  I’m also reasonably satisfied with my compositional skills – at least in this early stage of my development as a photographer.  I don’t expect to win any photo competitions (yet), especially since my intent as a photographer is at least as much for scientific documentation as it is for artistic expression, but I’m satisfied that I’m on the right track and developing the eye I’ll need to make good progress.

What I’m not satisfied with yet are the middle two – understanding lighting and knowing how to use a flash.  Let’s face it, I was starting from square one here.  My only prior experience with insect photography were middlin’ attempts in the mid-1980’s using an Olympus OM-10 body, a Zuiko 50mm lens (maximum magnification 1:2), and natural light only.  I quickly lost interest (too distracting for the collecting), picking it back up only for my 1999 trip to South Africa.  Fast forward to May 2009 and my acquisition of a bona fide insect macrophotography setup, complete with Canon’s 100mm f/2.4 and 65mm 1-5X macro lenses and their MT-24EX macro twin flash.  Talk about giving a Ferrari to someone who had just received their learner’s permit!  I like a good challenge, however, and spent the rest of 2009 with camera in hand on several memorable field trips – shooting lots of frames, deleting many on the spot and more when I saw them on the computer, and occasionally stumbling onto a pretty good one.

While I still have much to learn, one thing I did realize is that lighting remains a challenge even with a decent setup such as mine.  The MT-24Ex flash unit, in particular, while seemingly the flash of choice among Canon-using amateur insect macrophotographers, produces a very harsh light.  The capabilities and shortcomings of this flash unit have been reviewed in great detail by several insect macrophotographers much more knowledgeable than I (e.g., Alex Wild, Dalantech, Kurt, etc.), so I simply refer you to their websites if you’re interested rather than try to summarize here.  However, the one thing they all emphasize with this flash unit is the need for diffusers.  Diffusing light is easy; a simple sheet of tracing paper will do.  However, diffusing light in a manner that is equally effective with both the 65mm and 100mm lenses (with their shorter and longer working distances, respectively) and also convenient for field-use is hard.  For most of the 2009 season, I tried using Sto-Fen Omni-Bounce Diffusers, and while they were marginally better than no diffusers at all, the results were still not satisfying.  More recently, I’ve been experimenting with the Gary Fong Puffers, which Dalantech has modified for use with the MT-24EX.  I hadn’t yet committed to constructing the diffusers as described and conducting controlled comparisons between the Puffers and Sto-Fens, but my initial tinkering with the Puffers has me impressed.  Below are two photos of Cicindela splendida (the aptly-named Splendid Tiger Beetle) – the first (which some of you may remember from this post) was taken in the field using the Sto-Fen diffusers and the 65mm lens (1X)… 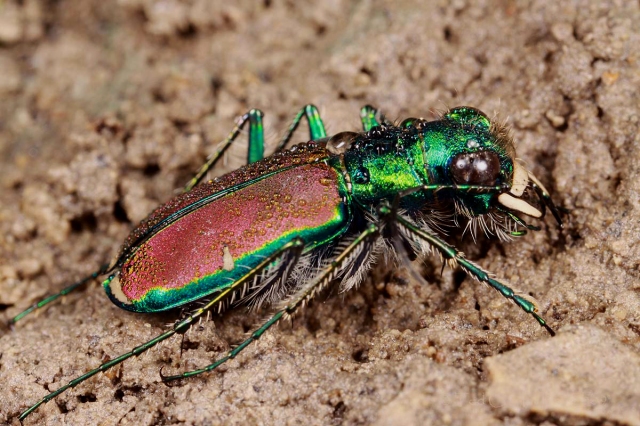 …while the second was taken recently of this same beetle (in captivity on native soil) using the Puffers attached to the Sto-Fens and the 100mm lens (at slightly less than 1X).

Both photos have been cleaned up a bit with post-processing; however, neither has been altered dramatically.  While not a true one-to-one comparison due to different venues (field versus captivity) and lenses (65mm versus 100mm), the second photo is clearly superior to the first, with softer lighting resulting in richer colors and far fewer specular highlights on the insect body.   I had to bump the lighting up considerably for the second photo, since the Puffer combined with the Sto-Fens cut the light levels quite a bit, yet still the photo lacks any of the harshness and washed appearance of the first photo.  The use of the 100mm lens in the second photo also should have presented a greater challenge for the lighting due to the increased working distance (~8 inches, compared to only 2-3 inches for the 65mm lens).  I’m really quite pleased with the results of this initial experiment – enough to the point that I’ve ordered the necessary materials and am ready to dive into construction of my own set of “Dalantech-Puffers.”

15 Responses to A matter of diffusion