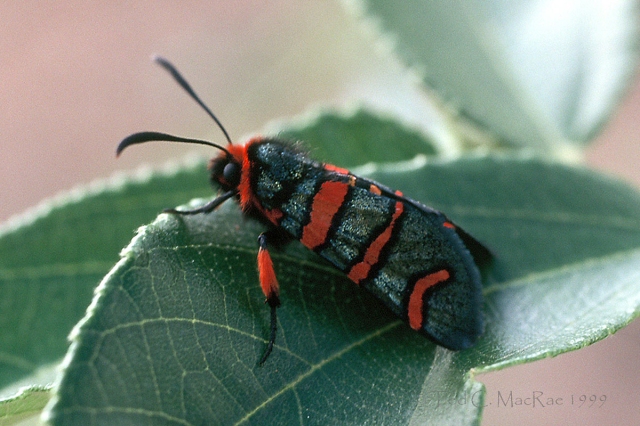 Last week’s king cricket quiz (Tuesday Teaser) reminded me that I still have quite a few photographs from my trip to South Africa, now 10 years ago, that I still haven’t shared. This pretty little moth is Arniocera erythropyga, which I photographed at Geelhoutbosch farm in South Africa’s Northern (now Limpopo) Province while clambering up the magnificent north-facing escarpment of the Waterberg Mountains.

I saw this moth as it sat on the foliage of Grewia sp. (family Malvaceae) – fully exposed for all the world to see.  If we’ve learned anything by now, we know that brightly colored insects that expose themselves conspicuously during the day are probably protected by chemical defences (or perhaps mimicking something that is). Such was the case for Bromophila caffra, an equally strikingly-colored fly that I saw on the same hike, and it is also the case for this moth as well. Arniocera erythropgya is a member of the family Zygaenidae, or burnet moths – many members of which are known to release hydrogen cyanide (Scholtz and Holm 1985). This is the same family to which another toxic species I featured last spring belongs (Pyromorpha dimidiata).  A number of moths and butterflies in other families are also known to release HCN (produced by the breakdown of cyanoglucosides sequestered from the plants on which they feed); however, all life stages of zygaenid moths, including the egg, contain these compounds.  This suggests that zygaenid species are capable of synthesizing these compounds themselves rather than needing to sequester them from their host plants (Scoble 1992). While some zygaenid larvae do feed on plants that contain cyanoglucosides, they apparently do so simply because of their tolerance to the compounds but without the need to sequester them from the plant.

Thus, when I saw and approached this little moth, it didn’t flinch or flee.  Protected by toxicity, it continued sitting brazenly atop its exposed perch – welcoming me to see it, daring me to do anything more than take its photo.

My thanks to Roy Goff at African Moths for confirming the identity of the individual in this photograph.