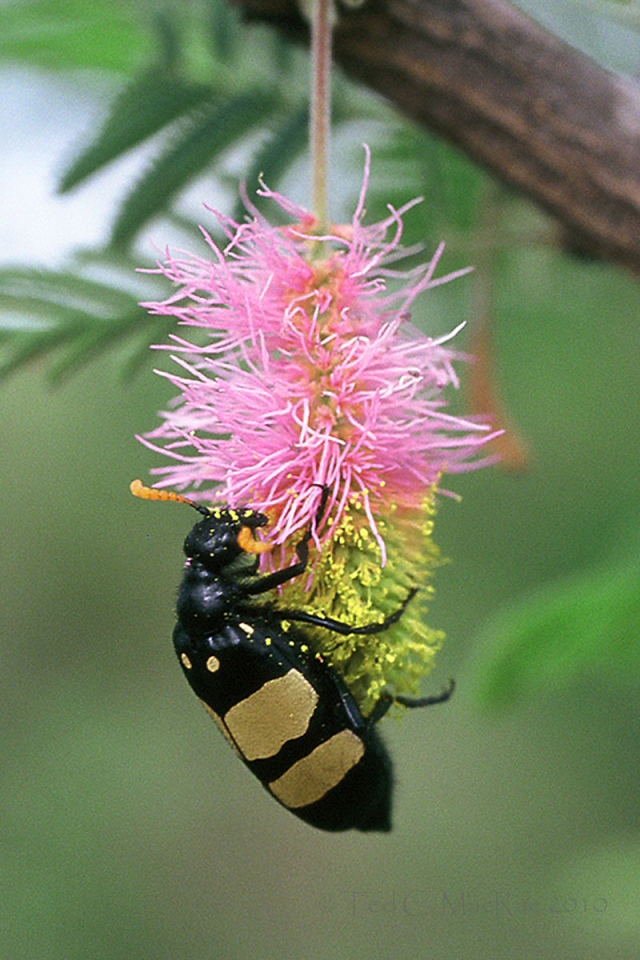 Mylabris oculata, the CMR bean beetle, is a large, conspicuously-colored beetle in the family Meloidae (blister beetles) that I saw quite commonly during my stay in South Africa.  “CMR” refers to the Cape Mounted Rifle Corps, a police force in the old Cape Colony whose uniforms sported black and yellow bands that resemble the colors of this beetle.

Blister beetles as a whole are, of course, well known for their chemical defenses, primarily cantharidin (the active ingredient in ‘Spanish Fly’, an extract of a European species of blister beetle).  This terpenoid compound is a painful irritant, especially when coming into contact with mucous-lined membranes such as those of the gatrointestinal and urinary tracts.  Blister beetles emit body fluids containing cantharidin from joints on the legs when disturbed, giving any would-be predators a foul-tasting appetizer. As we have so often seen, insects containing such effective defenses are often aposematically colored to advertise the fact, allowing them to brazenly lumber about fully exposed during the day with little to fear.  If there ever was an insect that screamed aposematic, it is M. oculatus with its boldy contrasting black and yellow elytra and hot-orange antennae.

These beetles, however, are more than just a frustration for hungry birds, but also a serious pest of numerous ornamental, fruit and vegetable crops (Picker et al. 2002).  Large numbers of adults congregate on plants and preferentially feed on the flowers.  In the more natural settings where I was encountering these beetles, they were most often seen on flowers of Acacia spp. or (as in the above photo) Dichrostachys cinerea in the family Fabaceae.  To be honest, they became quite a source of frustration for me as well – not because of their distastefulness or pestiferous habits, but because of their role as the model in a mimicry complex.  It was the mimic that I was after, and since mimics tend to be much less common than their models, I had to look at a lot of M. oculatus to find the few specimens of the species I was after.

Pop quiz: Can anybody name the mimic?

Back to their chemical defenses – I’ve often wondered just how poisonous blister beetles really are, especially to humans.  Here in the U.S., their main importance is as contaminants in alfalfa hay fed to cattle and horses.  Deaths from severely contaminated forage do occur, but this is dependent upon the cantharidin content of the species and their abundance within the hay.  The highest reported cantharidin content for a blister beetle is 5.4% dry weight in Epicauta vittata.  Calculations based on this figure and the lethal dose for a 1000-lb horse indicate that around 100 such beetles would need to be eaten to receive a fatal dose.  This seems to make the claim that a single beetle can kill a human a little far-fetched.  However, M. oculatus are big beetles – more than a full inch in length and bulky.  In this regard, I found an interesting tidbit at the TrekNature website.  Clarke Scholtz is an entomologist at the University of Pretoria, and when asked, “Is it true that their poison can kill a human being?”, he responded:

Yes; they are poisonous enough to kill people – especially a big beetle… The poison is very toxic and actually causes collapsed tissue. It would also depend on the weight of the person, as with any other toxin. The poison of a CMR beetle, that is dried and powdered, is sufficient to kill a 70kg human.