Are we loving our prairies/glades/woodlands to death?

I had such high hopes for last weekend’s collecting trip – late May is boom time for insects across Missouri, we have had good moisture this spring, and I would be visiting some high-quality natural communities that I had not visited for a long time.  My stated goals (the jewel beetles, Agrilus impexus and A. frosti) were long shots – I knew that and would have been fine coming home without those species (which I did) had the the collecting been otherwise productive (which it was not).  Still, I’ve been doing this for a long time now, and I’ve learned to draw on my accumulated experience when things don’t go as planned to give myself the best shot at turning a bad collecting trip into a decent one when things don’t go as planned.  The itinerary with which I start is rarely the one that I actually follow, and this past weekend was a good example of such.

My first stop was Ha Ha Tonka State Park, one of Missouri’s premier parks, boasting high-quality chert, dolomite, and sandstone savanna interspersed with dolomite glades.  It is on these glades and savannas that I hoped to find Agrilus impexus, or failing that at least collect a nice diversity of other jewel beetles on the oaks and hickories of the savannas and surrounding woodlands.  However, it was with some reservation that I even came here after being told by my colleague at the Department of Natural Resources just 2 days before my trip that 75% of the park’s grasslands and woodlands had been burned within the past two years.  For an insect collector, this is never good news – in all my years of collecting insects, my experience in relatively recently-burned habitats has been consistent: collecting sucks!  I decided, however, to visit Ha Ha Tonka anyway because of the quality of the natural communities it contains, thinking perhaps I might be able to find pockets of unburned habitat supporting good insect populations.  This was not to be. I beat oak after oak in the savannas and woodlands – nothing!  I swept little bluestem and Indian grass in the glades – nothing!  The foliage was lush and green and the savanna and glade landscapes highly diverse – given the time of season the place should have been teeming with insect life, yet it almost seemed sterile. Were it not for a few Chrysobothris quadriimpressa jewel beetle adults that I found attracted to a recently wind-thrown black oak tree, I would not have seen any insects here at all.  It appeared my fears about park-wide depression of insect populations had been realized.  However, not one to waste a visit I decided to explore some of Ha Ha Tonka’s fascinating geological features.  Ha Ha Tonka contains one of Missouri’s best examples of karst geology, with complex structures formed from the collapse of a major cave system.  The Devil’s Promenade is one of the more spectacular examples of such, its horseshoe-shaped cliff representing the former interior walls of a now-collapsed cave.  As dusk approached, the day’s poor insect collecting caused me to abandon my plans to stay here and blacklight for nocturnal beetles.  Instead, I decided to break from the itinerary, drive further west and explore Lichen Glade Natural Area in the morning before heading to the Penn-Sylvania Prairie BioBlitz later that afternoon.

Lichen Glade Natural Area is a small area owned by The Nature Conservancy that boasts a high-quality sandstone glade surrounded by post oak/black jack oak forest.  My first visit to the area more than 20 years ago was during May, and it was one of the most productive collecting trips I’ve had with a number of Agrilus spp. (including A. frosti) beaten from post oak (Quercus stellata) along the woodland edge.  I didn’t visit again until fall of 2002, when Chris Brown, Rich Thoma and I found claybank tiger beetles (Cicindela limbalis) sunning on the exposed sandstone outcrops, and I made one more visit the following May to beat more insects off of post oak.  The Lichen Glade that I returned to this past weekend was a very different place from when I last visited – the surrounding woodlands had been extensively opened (I would guess within the past few years based on the size of the post oak resprouts), and fire had been used throughout the area.  Anticipation turned to frustration when no amount of beating of the woodland vegetation and sweeping of the glade vegetation turned up beetles in any appreciable numbers (or any insects for that matter) and two hours worth of effort yielded not a single buprestid beetle! 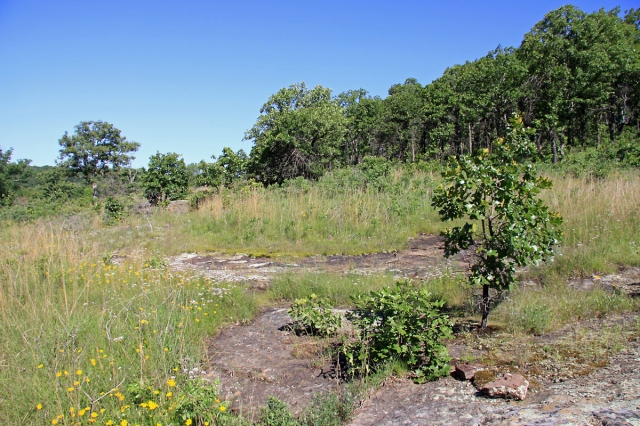 With resignation, I headed on over to Penn-Sylvania Prairie, where during the introduction to the BioBlitz I learned that nearly half of the 160-acre prairie was burned last December and all of it had been burned within the past few years.  I knew what I was going to find – nothing!  Okay, I shouldn’t say nothing, as there actually were some beetles present.  However, the numbers and diversity were low, with all of the species encountered representing common, widespread species.  Moreover, it was not just beetles – all of the invertebrate group leaders (which included experts on snails, ants, butterflies, and bees) reported low overall abundance and diversity in their groups of interest.  Only the vascular plants – the metric by which the value of prescribed burning is always assessed – showed high diversity, with 300 species of mostly native prairie plants recorded for the site.  It was a fun event, with probably ~75 attendees and a delicious pot luck dinner that evening; however, it would have been more enjoyable had there actually been a nice diversity of insects present to document for the preserve.

My comments may make it seem that I am against the use of prescribed burning.  This is not true – I understand the critical role that fire as a management technique plays in restoring and maintaining examples of Missouri’s historically fire-mediated landscape. Without fire and other processes to mimic natural disturbance factors, most of Missouri’s historical grasslands and woodlands suffer relentless encroachment by woody vegetation. However, the modern landscape is very different from the historical landscape, where fires of unpredictable scale, intensity, and frequency operated within a vastly larger scale to create a shifting mosaic of natural communities in various stages of ecological succession. Such processes cannot be recreated on today’s severely fragmented landscape, where the precious few remaining tracts of native habitat are relatively to extremely small and more often than not separated from each other by vast expanses of homogeneous and “inhospitable” habitat (e.g., agricultural, urbanized, or severely degraded lands).  It is in that context that I have great concerns about how aggressively fire has been used in recent years on our state’s natural areas and the impact this is having on insect populations – specialist and generalist alike.  Fire proponents will point to published studies that show little to no effect by the use of fire for managing small, isolated remnants on specialist insects (see review in Henderson 2010).  However, there are an equal number of studies that suggest such concerns are well-founded (see review in Panzer 2002). A consistent limitation in all of the studies that have been conducted is the lack of very large and long un-burned remnants.  Prescribed burning has been adopted so rapidly and pervasively that there just aren’t any significant un-burned remnants left to properly include as controls in such studies.  As a result, the insect fauna present at a given site at the start of such a study is already skewed towards those species that successfully recolonized the area post-burn.  At a minimum, the data to this point are inconclusive, and certainly the potential for impacts has not been given the consideration it warrants in designing fire-management plans for our own state’s prairies and glades. Furthermore, as rapidly and aggressively as fire has been adopted on our few, small, widely disjuct remnants, the opportunity for proper investigation of those potential effects may be gone.  A particularly egregious example of the lack of consideration being given to prairie invertebrates in designing fire management plans is shown in these photos of Iowa’s Sylvan Runkel State Preserve before and after a late May burn and the impact of that burn on a resident population of Nevada buck moths (Hemileuca nevadensis).

Here in Missouri, as in Iowa, it’s a problem of scale – the landscape is too fragmented and remnants too disjunct to manage based strictly on floristic response.   Populations of generalist insect species will recover, and even specialist species may be able to overcome such management practices if they are widely distributed and sufficiently mobile. But what about conservative species with low vagility, such as the swift tiger beetle (Cylindera celeripes) and our disjunct population of the frosted dromo tiger beetle (Dromochorus pruinina), flightless species restricted in Missouri to the few tiny remnants of loess hilltop prairie in northwestern Missouri and a single 2.5-mile stretch of roadside habitat in west-central Missouri?  Until directly relevant data, gathered here in Missouri, are forthcoming to suggest otherwise, I believe the most judicious use of fire possible should be practiced in restoring and maintaining our grasslands and woodlands.  In-season burns may have been a part of the historical landscape, but their use today has great potential to result in local extirpations and should be used only after the most careful consideration.  Leaving un-burned refugia within remnant habitats to accelerate recovery would also be prudent – yet many land managers disregard this practice because of its logistical difficulties. This is especially true in small parcels, yet it is precisely these remnants that have the most to gain from their use (or lose from not doing so!).  In the historical landscape, every burn was a patch burn – no matter what its size, there were always adjacent or proximal unburned habitat from which recolonization could occur.  Elk and bison, too, were integral components of the presettlement prairie landscape – their roamings caused intermittent, localized disturbances that were likely not only crucial to the tiger beetles that I study but may also have contributed to vegetational diversity through patch succession.  Techniques that mimic these natural disturbance factors include mowing, haying, and managed grazing.  They can be utilized to mimic those disturbances as well as delay woody encroachment, and their use in land management should be considered for their ecological value rather than deprioritized because of their relatively greater complexity and cost to implement. Mechanical removal and selective use of herbicides offer additional tools for addressing woody encroachment while minimizing potential impacts to insect populations. An effective management program that considers all of the flora and fauna of a remnant may not be possible unless all of these management tools are utilized, or at least properly considered. As my good friend James Trager said in a recent email (quoting Andrew Williams), habitat restoration “cannot rest on any single management practice, nor practicing it too extensively.”

25 Responses to Are we loving our prairies/glades/woodlands to death?