A Prairie Tiger Beetle larva peers up from its burrow in rocky soil of a dolomite glade in the White River Hills of southwestern Missouri. The head of this 3rd-instar larvae is about the size of a pencil eraser.

I had so looked forward to the long Memorial Day weekend collecting trip – time of season and the weather were perfect, and it had been several years since I’d made a late spring swing through the woodlands, glades, and prairies of western Missouri. But after two fruitless days of searching for nearly non-existent beetles at Ha Ha Tonka State Park, Lichen Glade Natural Area, and Penn-Sylvania Prairie, I was faced with a choice: return home disappointed or try something completely different in an attempt to salvage the weekend.  I chose the latter. 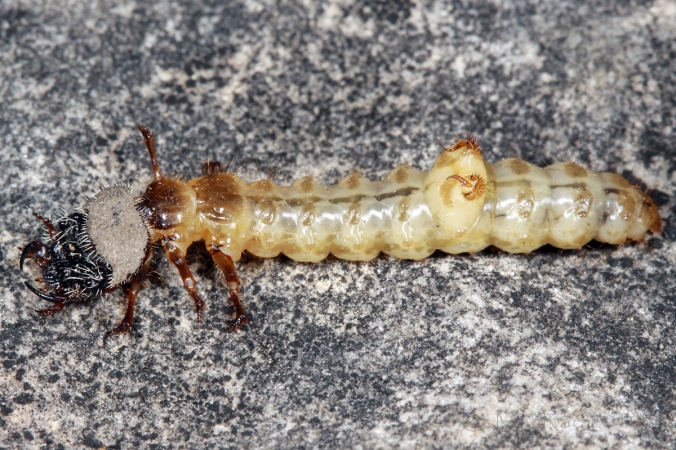 What could be more different than the White River Hills of southwestern Missouri?  The deeply dissected dolomite bedrocks supporting xeric, calcareous glades, dry woodlands and riparian watercourses couldn’t be more different than the gentle, acidic sandstone terrain of those more northerly locations.  Its hilltop glades (“balds”) are the most extensive such system in Missouri, and I’ve already featured several charismatic insects from my travels last summer to this part of Missouri, including Megaphasma denticrus (North America’s longest insect), Microstylus morosum (North America’s largest robber fly), and Plinthocoelium suaveolens (North America’s most beautiful longhorned beetle).  One insect that I also wanted to feature from that area but that eluded me during last fall’s cold and wet collecting trip is the Prairie Tiger Beetle – Cicindela obsoleta vulturina.  This impressive species is highly localized in Missouri, occurring no further north and east than the White River Hills.  Moreover, the populations in this part of the state and across the border in Arkansas are highly disjunct from the species’ main population in the southern Great Plains.  Like a number of other plants and animals, the Missouri/Arkansas disjunct may represent a relict from the hypsithermal maximum of several thousand years ago, finding refuge in these rocky hills after cooling temperatures and increasing moisture caused the grasslands of today’s west to retreat from their former eastern extent. 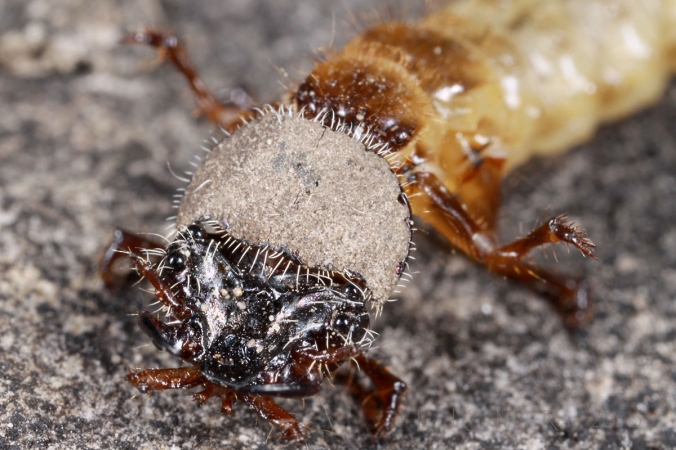 Despite its restricted occurrence in Missouri, the species is apparently secure and occurs commonly on the many dolomite glades that are found in the area. I have records from a number of localities in the White River Hills, but the best populations I’ve seen occur at Blackjack Knob in Taney County.  Of course, I would have absolutely no chance of seeing the adults during this Memorial Day weekend – adults don’t come out until late summer rains trigger emergence in late August and early September.  It was not, however, the adults that I was after, for I had seen larvae of what I believed must be this species in their burrows during one of my visits to this location last summer.  Although I have collected several other species of tiger beetles in the area, I reasoned these larvae must represent C. obsoleta vulturina due to their rather large size (this species is one of the largest in the genus in North America) and because they lacked the white bordering of the pronotum typical of species in the genus Tetracha – the only other genus occurring in Missouri with species as large as this.  I had tried to extract some of the larvae for an attempt at rearing, but neither of the two techniques I tried (“fishing” and “jabbing”) had worked.  Fishing involves inserting a thin grass stem into the burrow and yanking out the larva when it bites the stem; however, I found the burrows of this species to angle and turn due to the rocky soil rather than go straight down for a clear shot.  Jabbing involves placing the tip of a knife at a 45° angle about 1″ from the edge of an active burrow, waiting for the larva to return to the top of the burrow, and jabbing the knife into the soil to block the larva’s retreat – a quick flip of the knife exposes the larvae, but in this case jabbing did not work because I always ended up hitting a rock and missing the larva before it ducked back down in the burrow. 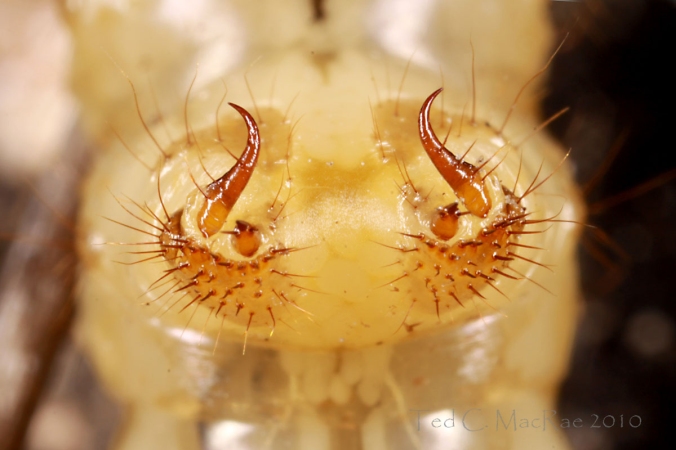 Hooks on the abdominal hump of a 3rd-instar Prairie Tiger Beetle larva prevent it from being pulled out of its burrow by struggling prey.

I returned to the site where I had seen larval burrows last year and once again found them.  I tried fishing a few, though I knew this would be futile, then jabbing – again with no success, and then had an idea.  I went to the truck and retrieved a small trowel that I use to dig soil for filling rearing containers, then found an active burrow (larva sitting at the top, though dropping upon my approach) and got in position using the trowel as I would the knife.  I held the trowel firmly with both hands and placed my body behind it so I could use all my weight to force the trowel into the soil and past the rocks when the larva returned to the top of the burrow – worked like a charm!  After taking photographs of the first larva that I successfully extracted, I set to the business of collecting nearly a dozen more over the next couple of hours.  I then filled several containers with soil (using rocks in the larger one to create “compartments” to keep the larvae separated), poked “starter burrows” in the soil, and one at a time placed the extracted larvae in the burrows and sealed them in by pushing/sliding my finger over the hole.  I’ve found this is necessary to prevent the larvae from crawling right back out and digging a new burrow somewhere else – not a problem if there is only one larva in the container (although I prefer they use the starter burrows that I place at the edge of the container so that I can see them in their burrows to help keep track of what they are doing); however, in containers with more than one larva they will often encounter each other and fight, resulting in some mortality.  Larvae sealed in starter burrows eventually dig it open again but generally continue excavating it for their new burrow.  One larva was not placed in a rearing container – it was kept in a vial for the trip home, where it was dispatched and preserved in alcohol as a larval voucher specimen. 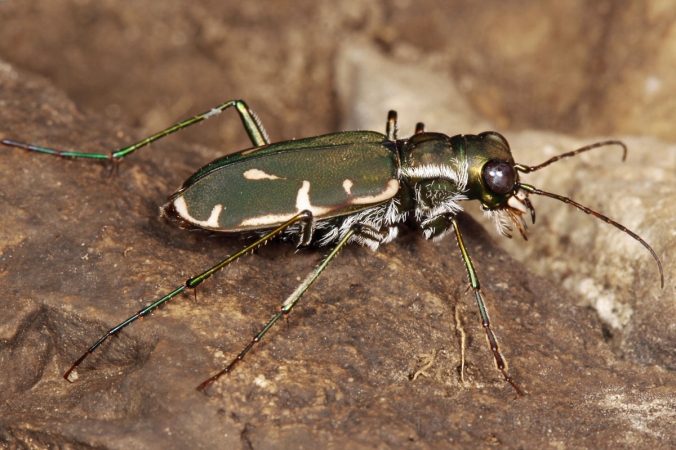 After returning to St. Louis, I placed the rearing containers in a growth chamber and monitored larval activity 2-3 times per week.  Whenever a burrow was opened, I would place a fall armyworm, corn earworm, or tobacco hornworm larva in the burrow and seal it shut.  Some burrows would be re-opened almost immediately and, thus, fed again, while others stayed sealed for longer periods of time.  Tap water was added to the container whenever the soil surface became quite dry – generally once per week, and by late July nearly all of the burrows were sealed and inactive. If these larvae did, indeed, represent C. obsoleta vulturina, then this would be the time they would be pupating.  On August 15 I had my answer, when I checked the containers to find the above male had emerged, and the next day two more adults emerged as well (including the female shown below). 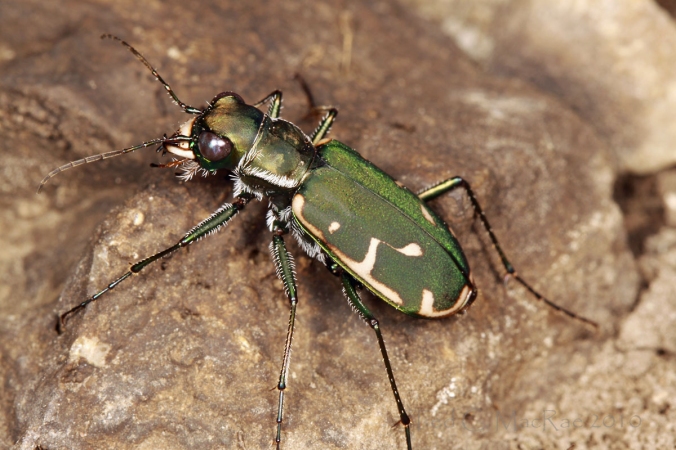 I put the emerged adults together in the largest rearing container, and within minutes the male and one of the females were coupled. I’ve kept them fed with small caterpillars and rootworm larvae, and numerous oviposition holes were eventually observed on the surface of the soil in the container. In a few weeks, I’ll place this container in a cold incubator for the winter and then watch next spring to see if larvae hatch and begin forming burrows. If so, it will be a chance to see if I can rear the species completely from egg to adult and preserve examples of the younger larval instars.

Edit 9/10/10, 6:30 pm: I checked the terrarium today and discovered 24 brand new 1st-instar larval burrows dotting the soil surface.  They are quite large already, almost as big as 3rd-instar burrows of the diminutive Cylindera celeripes.  I guess I’m surprised to see larvae hatching already, as I expected they would overwinter as eggs and hatch in the spring.  Now that I think about it, however, hatching in the fall makes sense, as this gives them an opportunity to feed some before winter sets in and also allows them to burrow for more protection from freezing temperatures.  I’ve dumped a bunch of 2nd-3rd instar Lygus nymphs into the terrarium for their first meal.