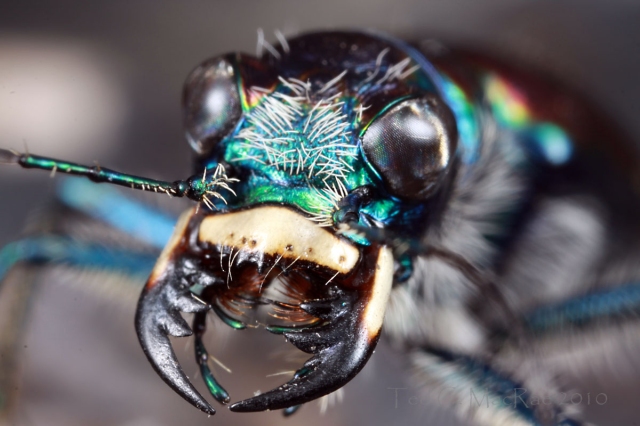 Recently I’ve been trying some different lighting and flash diffusion techniques with the Cicindela pulchra adults I brought back from South Dakota (see previous post).  While the beetles themselves are certainly among the most spectacular tiger beetles I’ve ever seen, I’ve been less than impressed with the photographs that I’ve managed to take of them.  Two factors have been largely responsible for this: 1) the smooth, shiny integument of the beetle reflecting the flash to create strong specular highlights, and 2) the colors, though brilliant, are also dark and difficult to bring out without further exacerbating the specular highlights.  Normally, the Sto-Fen+Puffer diffuser combination that I use does a pretty good job at diffusing the flash, but it just can’t handle these beetles.  To deal with this problem, I finally got around to trying out the do-it-yourself concave diffuser that Kurt at Up Close with Nature has been using with stunning results (similar to the tracing paper diffuser used so famously by Alex Wild at Myrmecos).  Photo 1 above and 2-3 below were taken with this diffuser on my Canon MP-E 65mm f/2.8 1-5X Macro Lens, and I’m rather pleased with these initial attempts.  I do need to figure out a better way to attach the diffuser to my Canon MT-24EX Macro Twin Lite Flash. 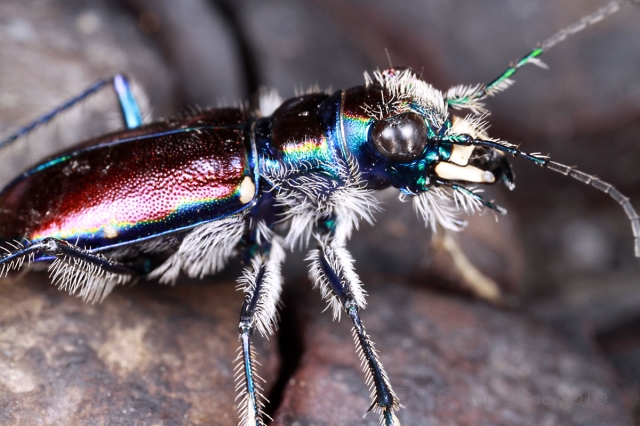 The problem with the concave diffuser is that it won’t work so well on my Canon EF 100mm f/2.8 Macro USM Lens due to its longer working distance.  I actually use this lens in the field as often as the MP-E 65mm lens, especially for the tiger beetles on which I focus (heh!) – not only do they rarely require more than 1:1 magnification, but they also rarely allow the ultra-close approach needed to use the 65mm lens.  The only solution is to find some way to get the flash heads closer to the subject to increase the apparent size of the light source, but so far I haven’t figured out a satisfactory way to do this.  Some photographers use the stalwart Canon Speedlite 580EX II Flash, equipped either with a do-it-yourself snoot diffuser or mounted on a bracket extender with a small softbox.  However, I am not a photographer, but rather an entomologist with a camera – I need to carry with me a net, vials, and in some cases a beating sheet and hatchet.  Both of the previously mentioned approaches for diffusing 100mm shots add far more bulk to the camera setup than I can accept.  I’ve been looking for extender brackets that will move the MT-24EX flash heads out closer to the subject to increase apparent light size and have found a few.  The Really Right Stuff B85-B Flash Bracket equipped with two FA-EX1 Flash Extenders and an extra Flash Mount looks like it would do the job quite well, but it is still bulkier (and vastly more expensive) than I would like.  The PhotoMed R2-C Dual Point Flash Bracket is a much less bulky and more reasonably priced option; however, the lack of any vertical adjustment capabilities is an insurmountable shortcoming.  Why Canon hasn’t themselves designed a lightweight, low-cost accessory for extending the MT-24EX flash heads out away from the lens is beyond me, and I’ve actually been toying with some ideas on how to do this myself using a couple of Kaiser Adjustable Flash Shoes.

Until I do figure out a solution, at least there is always the white box for any captive-held individuals (and yes, I have considered a small, collapsible white box to bring into the field – I’m not ready to resort to that just yet!):

27 Responses to Flash solutions for the beautiful tiger beetle