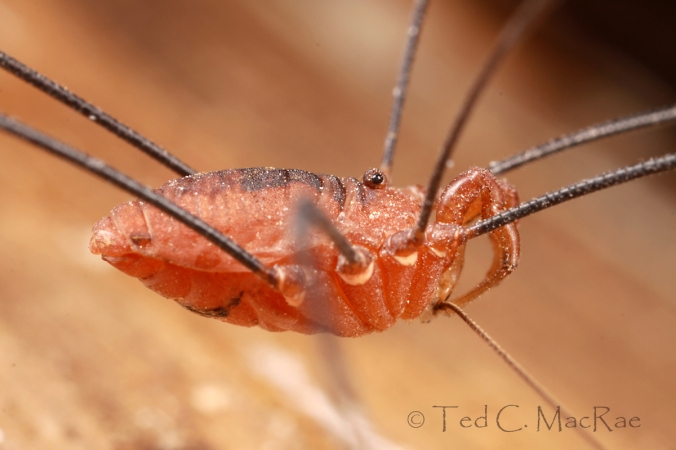 Seemingly correct answers came quickly to yesterday’s inaugural Super Crop Challenge, which featured a curious structure atop a harvestman (class Arachnida, order Opiliones) that I encountered while hiking the lower North Fork Section of the Ozark Trail in extreme southern Missouri. “Seemingly” I say, because even though some points were earned, others remained left on the table – the organism was rightly recognized as a harvestman, and the structure in the photo does indeed contain the ocelli (or eyes).  However, (see update below) – the ocularium (ocular or optical tubercle would also have been accepted).  Hey, I’m pedantic and proud!

As near as I can tell, this individual belongs to the genus Leiobunum (family Sclerosomatidae).  Species in this genus are notoriously difficult to identify; however, the super long legs, dark dorsal stripe, pointed abdomen, and very long palps with “knees” that extend dorsally to a level well above the ocularium suggest a male L. vittatum or one of its close relatives (Schulz 2010). Leiobunum vittatum is a common inhabitant of wooded habitats across the eastern U.S.

I took this shot with an MP-E 65mm macro lens at about 2.5X. The short working distance of the lens at this level of magnification makes it difficult to photograph these longer-legged species in lateral profile due to their habit of “waving” their especially elongate 2nd pair of legs in the air as pseudo-antennae – one touch of any part of the camera sends them scampering. I chased this guy back and forth across a downed tree trunk for some time before I finally got lucky when it encountered some prey (note the long structure extending down from the mouth area – I believe it is the antenna of a tiny, nymphal blattodean) and became distracted just long enough for me to close in and fire off a couple of close shots. He was actually closer to the underside of the log, so when I took this photo I was leaning far over the log with the camera almost upside-down!

Okay – Art earns points for being the first to identify it as a harvestman, while Geek snaps rare duplicate ID points for using the order’s scientific name (no complaining – scientific names will always get points on this blog).  Art, Aniruddha, and Geek also get half-points for mentioning (in order of correctness) eye, ocelli (technically more correct, but wrong plurality), and ocellus (yes, only one is visible – did I mention my pedantic tendencies?).  However, I’m going to declare arachnologist and Opiliones specialist Chris as the winner of this round for his impressive display of generic-level identification based on the meagerest of evidence!

Update 11/22, 11:00 a.m. – actually, Chris did name this structure in an email sent to my office address while the comments box was unchecked and, thus, earns a clean sweep of this challenge.