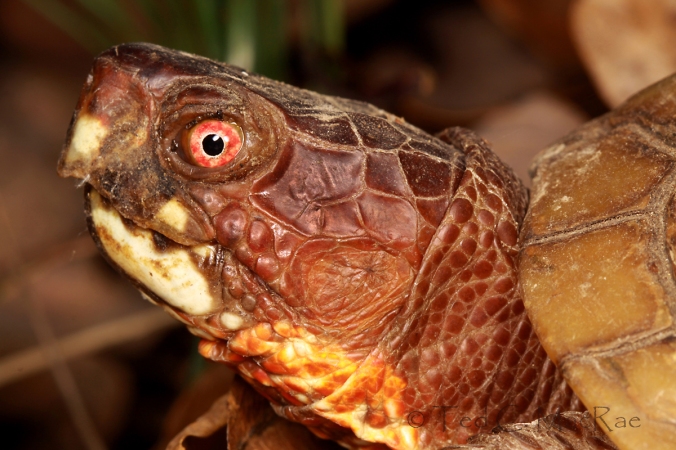 Is there anything more lovable than the humble turtle?  As old as the dinosaurs, they stumbled onto a body plan that works and promptly dropped out of the evolutionary arms race.  Slow, plodding, and seemingly oblivious, they steadfastly cling to their quite, unhurried lives.  As the rest of the earth’s diversity of life races on, turtles go about their business much as they have done for more than 200 million years now.  They are survivors.

My friend Rich and I encountered this three-toed box turtle (Terrapene carolina triunguis) during our hike of the lower North Fork Section of the Ozark Trail in extreme southern Missouri.  Three-toed box turtles are one of four U.S. subspecies of the eastern box turtle, occupying the area west of the Mississippi River from Missouri and Kansas south to Texas and distinguished by their largely unpatterned shell and – yes, three toes on the hind legs rather than four.  I walked right by this guy the first time without noticing him, and only when I turned around to go back and look at something else did I see him sitting there – neck fully extended.  Box turtles exhibit considerable variability in color and patterns on the head and neck, and this particular individual is one of the more conspicuously colored that I’ve seen.

And the eye – as red an eye as I’ve ever seen!  Almost surely a male, as females may have some red in the eye but rarely to such a spectacular degree.  Also likely full-grown based on his rather large size, though probably not too advanced in age yet since the growth rings were still easily visible (in older turtles the growth rings gradually wear smooth).  I estimated it at about 12 years based on ring counts – still a far cry from the 30-50 years that are not uncommonly documented.  He kept a watchful eye on me as I studied him, and I wondered about what his future held.  As an adult, he has settled into a small home range from which he rarely ventures – likely visible to me in its entirety from where I stood.  For the next several decades, he will amble across this single hillside on an endless quest for earthworms, strawberries, and mushrooms.  Save for a possible run-in or two with a destined-to-be-frustrated coyote, fox, or racoon, it will be a largely uneventful life.  He is a survivor.

60 thoughts on “Eye of the Turtle”