I expected to gain a better understanding of insect photography principles and techniques at last weekend’s BugShot insect photography workshop at Shaw Nature Reserve in Gray Summit, Missouri.  I even expected that I would walk away from the event with some new friends.  The one thing I did not expect was the discovery of an apparently unreported host/parasitoid relationship amongst my beloved tiger beetles.  Nevertheless, that’s exactly what happened in a patch of barren soil just outside of the Dana Brown Education Center where the event was being held. 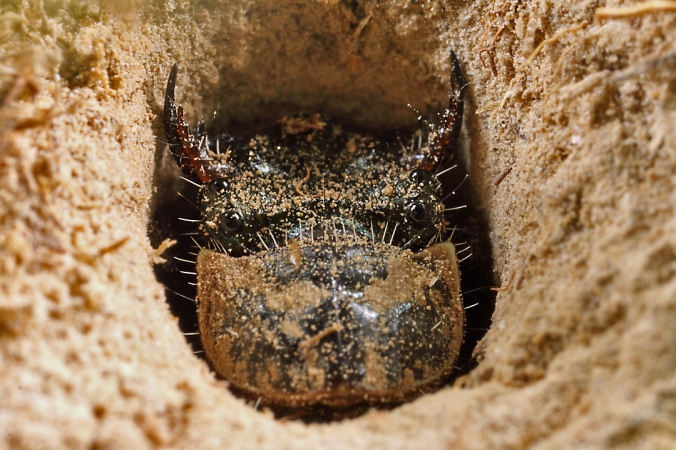 I had spied the small cluster of tiger beetle burrows the previous day as we left on our first group hike.  The burrows were unmistakably those of Tetracha virginica (Virginia metallic tiger beetle) due to their size (no other tiger beetle in east-central Missouri approaches the size of this species), and in fact some of the larvae were seen sitting at the tops of their burrows.  Tetracha larvae are easily distinguished from other genera of North American tiger beetles (in addition to their size) by their distinctive white-margined pronotum.  I had to catch back up with the group but came back later in the day and took a few photographs of one of the larvae sitting in its burrow.  Some of the other BugShot attendees were there and wanted to take photographs, but the larvae dropped on their less-practiced approach.  No problem, I just “fished” a larva out of its burrow and let them take their photographs.  When they finished, I began taking my own photographs, but I only got off one shot before the larva suddenly made a bee-line for its burrow and dropped in before I could block its escape.  Oh well, I do already have photographs of the larva of this species from other locations. 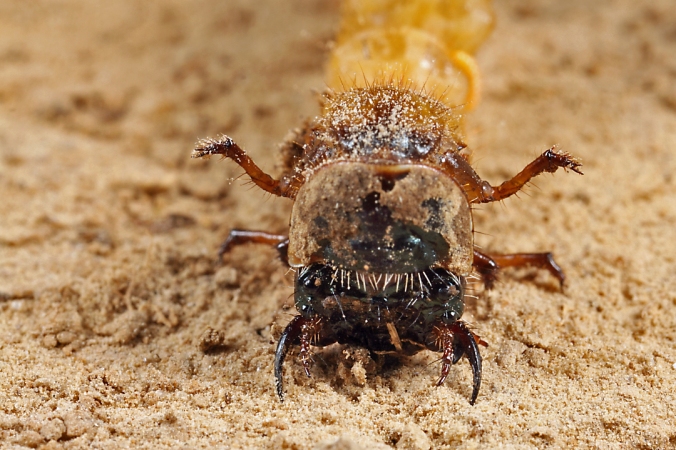 The next day I passed by the burrows again with Crystal and Lee.  I really wanted them to see the larvae, but they were not active.  No problem, I grabbed a long grass stem, chewed on one end, and inserted it to a depth of about 35 cm before it hit bottom.  A little jiggling to get the larva to bite, then a quick jerk back and out came the larva.  I never tire of seeing someone witness this for the first time—the way they jump back half-startled when they see the otherworldly larva flying through the air and landing on the grass.  I grabbed the larva and placed it on the barren clay to let them take photographs.  Crystal went first, and as she looked at the larva through her viewfinder she exclaimed, “there are wormy-things [the technical term, of course] on him.”  Lee and I looked, and sure enough there were two small “wormy-things” attached to the back of the tiger beetle.  I immediately recognized them as bee fly larvae (family Bombyliidae)—specifically Anthrax analis, the only bee fly known to parasitize tiger beetle larvae in the United States.  I was quite excited by this discovery, as I have never seen these before despite fishing untold numbers of tiger beetle larvae from their burrows over the past decade or so.  We all went camera crazy and took our turns photographing larvae and host, after which I popped it into a vial to keep for an attempt at rearing out the bee flies. 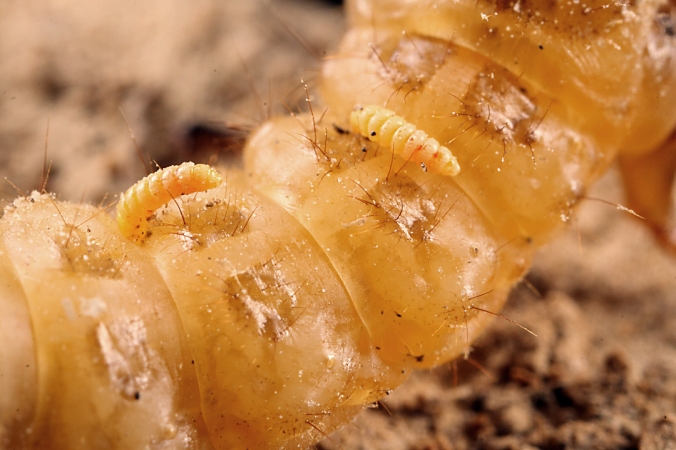 It now seems that our find represents more than just a personal discovery, as bee flies—to my knowledge—have not yet been reported parasitizing any species of the genus Tetracha.  Of the 70 Anthrax spp. for which hosts have been recorded (Yeates and Greathead 1997), only three are known to parasitize tiger beetles.  Shelford (1913) gave the first account of A. analis (as Spogostylum anale) parasitzing Cicindela scutellaris lecontei, noting that the adult females lay their eggs by flying backward and downward while thrusting the abdomen forward until it touches the sand near the host burrow entrance.  Hamilton (1925) found Cicindelidia obsoleta parasitized by this species, and Bram and Knisley (1982) expanded its known host spectrum to include C. hirticollis, C. tranquebarica, Cicindelidia punctulata, and Ellipsoptera marginata.  Photographs of larvae (presumably of this species) parasitizing undetermined tiger beetle larvae can be seen in Pearson and Vogler (2001) and in this photo by Chris Wirth.  Anthrax gideon has been recorded parasitizing Pseudoxycheila tarsalis in Costa Rica (Palmer 1982) and Oxycheila trisis in Brazil (Arndt and Costa 2001), while a third undetermined Anthrax sp. has been reared from larvae of Pentacomia ventralis, also in Brazil (Arndt and Costa 2001).  Oxycheila and Pseudoxycheila are related to Tetracha at the tribal/subtribal level (depending on which classification you follow), so the finding of A. analis utilizing Tetracha is not unexpected. 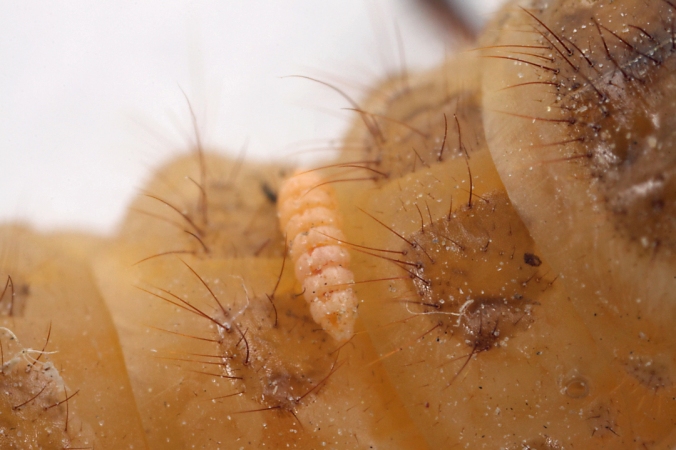 The beetle larva and its unwelcome tagalongs is now in a container of native soil and has accepted the starter burrow that I made for it. Hopefully at least one of the bee fly larvae will complete its development and emerge as an adult to allow confirmation of its identity.  If this host association does turn out to be unreported, we will follow up with at least a short journal communication.  To that end, any literature citations you are aware of regarding bee fly parasitism of tiger beetles that is not listed below would be most welcome.

Congratulations to Ben Coulter, who wins yet another BitB Challenge with 14 points (this guy is a machine!), and Mr. Phidippus came close with 13 points.  Ben and Phiddy were the only participants that figured out the parasites were bee flies of the genus Anthrax, and Phiddy was the only participant to guess the correct genus for the host.  Ben’s win gives him a now commanding lead with 49 points in the current BitB Challenge Session #4 as we enter the home stretch.  Mr. Phidippus and Roy are still in striking distance with 39 and 28 points, respectively.  Is anybody capable of keeping him from his third title?  We shall see.

Hamilton, C. C. 1925. Studies on the morphology, taxonomy, and ecology of the larvae of Holarctic tiger beetles (family Cicindelidae).  Proceedings of the U.S. National Museum 65 (Art. 17):1–87.

Palmer, M. K.  1982.  Biology and behavior of two species of Anthrax (Diptera: Bombyliidae), parasitoids of the larvae of tiger beetles (Coleoptera: Cicindelidae).  Annals of the Entomological Society of America 75(1):61–70.

Shelford, V. E.  1913.  The life history of a bee-fly (Spogostylum anale Say) parasite of the larva of a tiger beetle (Cicindela scutellaris Say var. lecontei Hald.).  Annals of the Entomological Society of America 6(2):213–225.

Yeates, D. K. and D. J. Greathead.  1997. The evolutionary pattern of host use in the Bombyliidae (Diptera): a diverse family of parasitoid flies.  Biological Journal of the  Linnaean Society 60:149—185.