Tiger beetles may have been the primary focus of last week’s 9-day, 10-state, 4,700-mile collecting trip; however, they were not the only beetles I was hoping to see. Longhorned beetles (family Cerambycidae) of the genus Crossidius are unusual in the family because of their fall rather than spring/summer adult activity period, and they just happen to occur in dizzying variety throughout the Great Basin and surrounding mountainous areas. Larvae of all species are presumed to feed on the roots of perennial, shrubby, fall-blooming composites, primarily in the genera Chrysothamnus, Ericameria, Gutierezzia, and Haplopappus (Linsley and Chemsak 1961), with the adult activity period undoubtedly timed to allow congregation and mating on the late-season blooms of their host plants.  Only 13 species are currently recognized, but these are further divided into 37 subspecies and innumerable locally distinct populations.  Not having spent much time in the mountain west during the fall, this group has till now been poorly represented in my collection.

The species shown here, Crossidius coralinus fulgidus, was among the first of many that we encountered during our trip.¹  This population was seen near Vernal in northeastern Utah.  It was late in the day and the adults had settled for the night onto the flowers of their host plant, Ericamera nauseosa.  Flower-visiting longhorned beetles are notoriously frustrating subjects to photograph, as their constant movement and long legs and antennae make focus and composition difficult.  These beetles had essentially ceased activity, allowing me to carefully compose and focus the shot, and the low sun in the western sky provided a bright blue eastern sky to use as a colorfully contrasting background.  The photo above (the very long antennae identify it as a male) was taken hand-held with my Canon 100mm macro lens at ISO 400 and 1/60 sec to allow exposure of the sky and flash at an aperture of f/16 to illuminate the subject and achieve good depth of field.  My only criticism of this photo is the small amount of blur seen in the distal antennal segments.

¹ “We” refers to myself and Jeff Huether from Geneva, NY. Jeff is primarily interested in Meloidae but like me also has an interest in Cerambycidae. I was fortunate to have Jeff with me on this trip, as he has collected extensively throughout the Great Basin region and encountered nearly all of North America’s named species and subspecies of Crossidius. It is only because of his prior experience with this group that I was able to find this and several others that we saw during the trip. 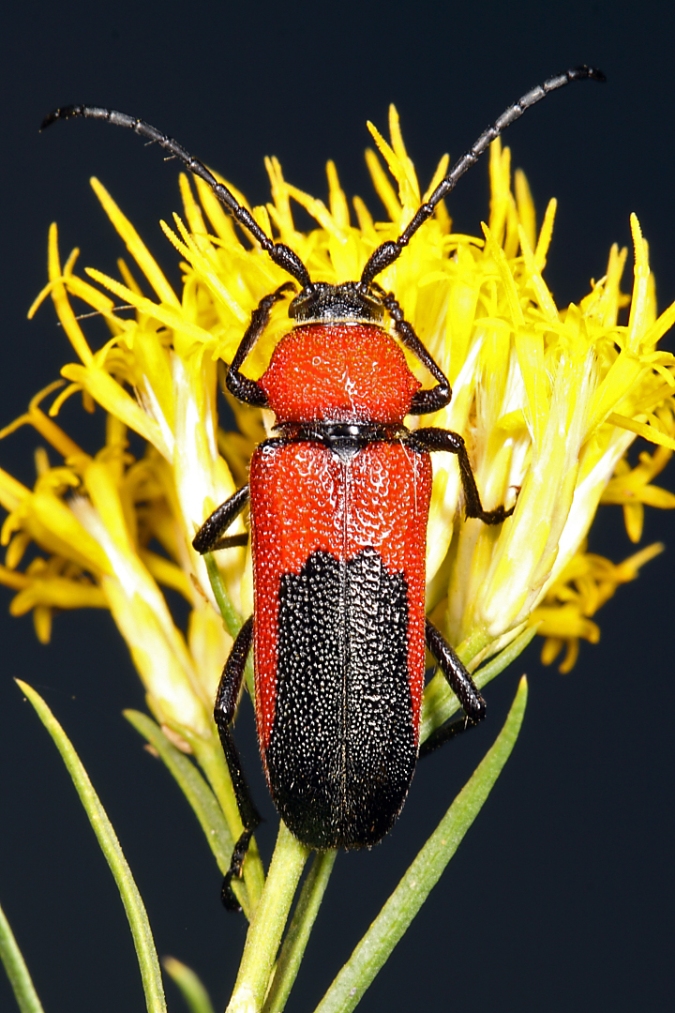 Because the beetles were so calm, I spent some time with this female individual trying different settings to see their effect on background color, subject illumination, and detail.  All were taken hand-held using the same lens at f/16, with the left photo also using my “typical” settings of ISO 100 and 1/200 sec.  The background is very dark (in post-processing I might choose to make it black)—good for some subjects but not this one, and although the focus is good the lighting is rather harsh (I had to decrease highlights in post-processing much more than I normally like).  The center photo was taken with ISO increased to 400 and results in a much more pleasing, if still not very natural-looking sky background.  Focus remains good and the shorter flash duration needed reduces the amount of highlighting that needs post-processing adjustment.  Overall I like this photo the best except that the sky is not true in color.  The right photo is also at ISO 400 but uses a slower shutter speed (1/60 sec).  The sky in this photo is the most natural-looking, and as might be expected problems with flash highlights are minimal—it almost looks like a natural light photograph.  However, some amount of motion blur can be detected, especially in the antennae.  Perhaps intermediate shutter speeds (e.g. 1/120 sec) or slightly higher ISO might effectively deal with this while still allowing the truest colors.  What do you think?

Linsley, E. G. and J. A. Chemsak.  1961.  A distributional and taxonomic study of the genus Crossidius (Coleoptera, Cerambycidae).  Miscellaneous Publications of the Entomological Society of America 3(2):26–64, 3 color plates.