In A Field Guide to the Tiger Beetles of the United States and Canada (Pearson et al. 2006), Cicindela scutellaris yampae (Yampa Festive Tiger Beetle) is one of 223 species and subspecies listed in the book’s index to species and subspecies. Although the book’s alphabetical listing places it second to last in the list, it surely must be considered near the top of any list based on beauty. It is also among the most geographically restricted tiger beetles in North America, restricted to the Maybell Sand Dunes in northwestern Colorado where it occurs with the equally beautiful, rare, and restricted Cicindela formosa gibsoni (Gibson’s Big Sand Tiger Beetle). Like that subspecies, C. s. yampae was one of six endemic sand dune tiger beetles targeted in this year’s Annual Fall Tiger Beetle Trip™, and as these photos show I was lucky enough to find it. 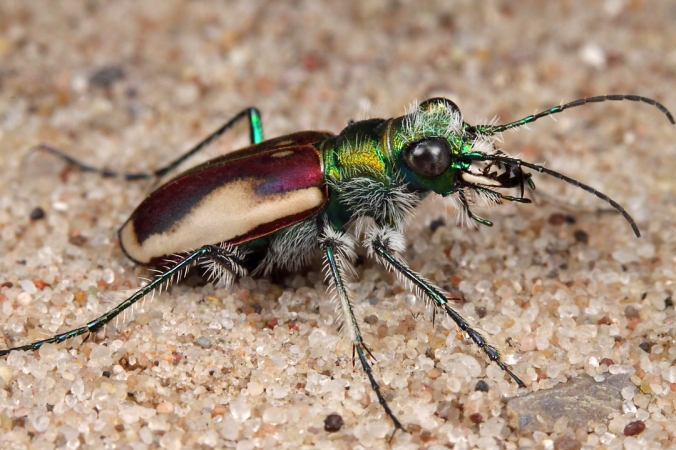 As a species, C. scutellaris is one of North America’s most widely distributed and polytopic species, with the nominate and lecontei forms inhabiting a wide swath of the Great Plains and Midwest.  Around the eastern, southern, and western perimeters of its geographical distribution occur numerous named subspecies exhibiting a tremendous diversity of variations on the species’ “normal” coloration and maculation.  Cicindela s. yampae is most similar to the nominate subspecies due to its green head and prothorax with purple-red elytra, but it differs in possessing a broad white maculation on the side of each elytron (top photo).  There are individuals, however, in which the maculation is reduced to isolated spots (bottom photo), resembling somewhat the pattern of maculations seen in C. s. lecontei further to the east.

Pearson et al. (2006) note that records over the years suggest the remaining populations of this beetle are small. We did not see many individuals on our visit to the type locality east of Maybell early this past week (perhaps no more than seven total), and we saw none at a formerly larger sand dune about 10 miles west of Maybell.  In past years this latter site has supported good numbers of the beetle, but it has apparently succumbed to vegetational encroachment of the formerly more open sand dune. As far as I am aware there are no conservation measures in place on any level to protect these remaining populations and ensure that adequate suitable habitat remains to enhance the beetle’s long-term prospects.