Yesterday I received in the mail a package of specimens for identification from Dan Heffern in Houston, Texas. I first began corresponding with Dan about 25 years ago—not long after I myself became interested in Coleoptera, and as an avid collector of longhorned beetles (family Cerambycidae) Dan knows a thing or two about jewel beetles (family Buprestidae) as well. Over the years, Dan has come up with a number of great buprestid species from Texas, especially through rearing, many of which he has graciously sent to me examples for my cabinet.

The present package was no exception, as it contained a male/female pair of one of North America’s least frequently encountered buprestids, Xenorhipis hidalgoensis. Dan had reared them from dead branches of Condalia obovata collected in south Texas as part of a multi-year beetle survey in the Lower Rio Grande Valley. He had mentioned to me that he would be including them in the sending, but that did nothing to diminish my excitement upon seeing the specimens when I opened the box. The species was first described from Hidalgo Co., Texas (Knull 1952), and other than a single record from the neighboring Mexican state of Tamaulipas (Nelson et al. 1981) subsequent mentions of the species have been limited to catalogue listings and inclusion in keys to species. Thus, these specimens represent not only a nice addition to my collection, but also the first reported larval host for the species.

Xenorhipis hidalgoensis belongs to the tribe Xenorhipini, the males of which exhibit a distinctive specialization of their antennae in that the distal segments are highly modified into a very extended flabellate or lamellate condition. Females, in contrast, retain the serrate antennal condition that is more typical throughout the family.  Differences in antennal morphology aren’t the only sexual differences exhibited by members of the tribe, as males and females often exhibit differences in coloration as well. This is especially true in the genus Xenorhipis, and I’m not aware of a more striking example of this than X. hidalgoensis (compare these photos to those of male/female pairs of X. bajacalifornica, X. brendeli and X. osborni in A new species of Xenorhipus from Baja California).

The highly modified male antennae are interesting from both an evolutionary and functional standpoint. Similarly modified male antennae are found in a few other groups of Buprestidae, including the genus Knowltonia in western North America (four species), the monotypic genera Mendizabalia and Australorhipis in South America and Australia, respectively, and two species in the enormous Australian genus Castiarina (Bellamy and Nylander 2007). The Xenorhipini, however, with 20 species distributed throughout the Western Hemisphere, is by far the most diverse group exhibiting the condition. Despite the similarity of their antennae, the taxonomic distance between these groups and differences in the detailed structure of the numerous olfactory sensillae that cover the modified segments (Volkovitsh 2001) suggest that the modifications have arisen and evolved independently in these several disparate taxa.

All Buprestidae exhibit sensory structures on their antennae, presumably with olfactory and/or thermosensory functions; however, Wellso (1966) provided strong evidence that females of X. brendeli release pheromones that are highly attractive to males and detected by their elaborate antennae. Caging studies with virgin and mated females revealed that males were highly attracted to virgin but not mated females, and that mated males were not attracted to either virgin or mated females and died shortly thereafter.  Further, more than 80% of males were attracted within a 1-hour period just past midday. It is assumed that chemoreceptors for detecting female pheromones are located on the male antennae, as males with their antennae removed were not attracted to caged virgin females but were able to mate when caged with them. This suggests that the male antennae evolved in response to selection for greater surface area, which allows placement of more sensillae to detect female pheromone. Wellso observed also that adults are very short-lived, with no individuals living longer than 48 hours (perhaps due to reliance on pheromone attraction rather than longevity for mate location). This, along with their very short daily activity period, may explain  why adults of species in this tribe are so seldom encountered in the field. 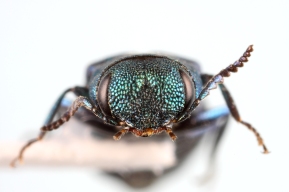