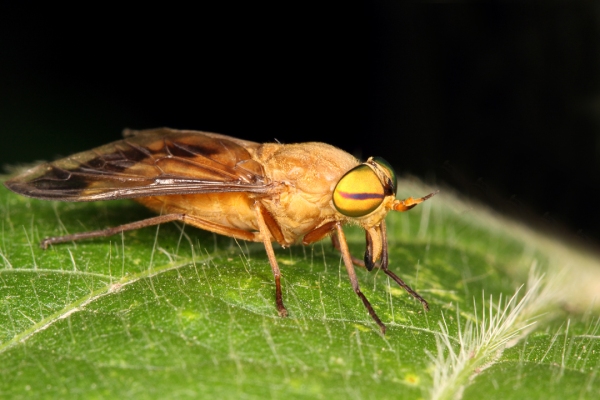 While the eyes of this female horse fly (family Tabanidae) aren’t quite as striking as those of Tabanus lineolus (the wonderfully dimorphic males and females of which were made famous by Thomas Shahan and Ralph Holzehthal), they still managed to catch my eye as I was scouting for more pedestrian types of insect in a soybean field in central Argentina this past week. We know this is a female due to the separated eyes (males have larger eyes that meet at the middle of the head—supposedly the better to see females with); and by the obvious, blade-like mouthparts, which the females use to slice mammal skin so they can lap the blood that their eggs need for development prior to being laid while males forego specialized mouthparts and concentrate on using their huge eyes to look for females.

I suspect this individual had recently emerged from the soil (where many horse flies pupate) and was still hardening off, as she was very calm sitting on the leaf and allowed me to steady the leaf with one hand as I snapped a few photos with the other. I would have loved to have switched out the 100mm lens I was using and put on my 65mm 1-5X lens to really zoom in on those striking eyes. Unfortunately, I don’t think my field companions shared or understood my fascination with this little insect. If anybody has a clue about the identity of this species please let me know.