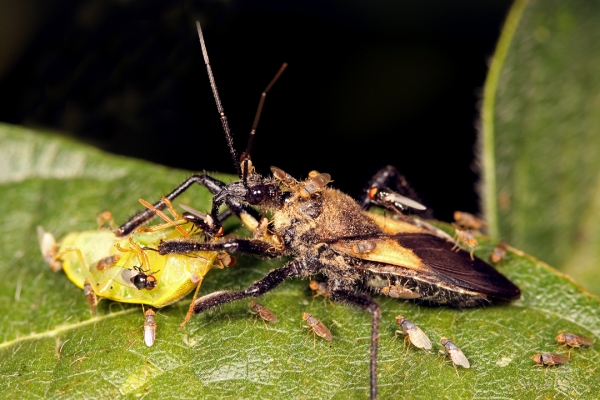 I happened upon a rather interesting scene last week in a soybean field in northern Argentina (Chaco Province). This assassin bug (family Reduviidae) had captured and was feeding on an adult stink bug of the species Piezodorus guildinii—an important pest of soybean in Argentina and Brazil (where it is known by the common names “chinche de la alfalfa” and “chinche verde pequeño”, respectively). Assassin bug predation is always interesting enough itself, but what made this scene especially fascinating was the large congregation of flies surrounding and even crawling upon the predator and its prey. I had not witnessed something like this before, but it seemed clear to me that the flies were engaging in kleptoparasitism—i.e, stealing food. I’ve gotten into the habit of keeping a full set of extension tubes mounted on the camera with my 100mm macro lens—this not only provides the most useful (for me) range of magnification but also serves as a convenient and easy-to-use field microscope. Through the viewfinder I could see that there were at least two markedly different types of flies involved—more abundant, small, brown flies that I presumed (incorrectly, as it turns out) to be some type of drosophilid (vinegar fly), and a few larger, black flies that were completely unfamiliar to me. The flies were apparently feeding on fluids from the stink bug prey but also crawled all over the assassin bug as it fed. The assassin bug seem unencumbered in its feeding by the presence of the flies, but periodically it would slowly wipe its forelegs over its head to dislodge flies that had settled onto it. Just as quickly as they flew away, however, they crawled back. 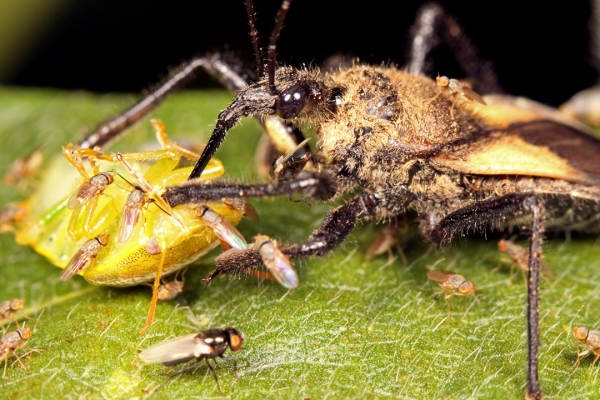 The assassin bug, on the other hand, I recognized as very likely a species of Apiomerus—a large, exclusively New World genus known in North America as “bee killers” for their habit of sitting on flowers and ambushing visiting bees for prey. The prey selection behaviors of these insects, however, are more generalist than the name implies, as can be seen by these photographs. To verify my generic ID and possibly obtain a species ID, I sent some of these photos to Dimitri Forero at the Heteropteran Systematics Lab at University of California-Riverside. Dimitri is revising portions of Apiomerus (e.g., Berniker et al. 2011) and working on a general phylogenetic hypotheses for the genus. In the past he has been quite helpful in fielding questions from me about these bugs, and within a few hours Dimitri replied to inform me that the assassin bug was, indeed, a member of the genus Apiomerus, likely representing the common, widespread species A. lanipes (ranging from Panama to Argentina), based on its coloration, locality, and relative size. Update 12 March, 3:07 pm—After seeing the last photo in this post (which I did not send to him initially), Dimitri wrote to say the ventral abdominal pattern was not characteristic of A. lanipes. He asked about its size, to which I replied that it was about the same length but maybe a little less robust than A. crassipes (eastern North America). He later added, “I now think that this is A. flavipennis Herrich-Schaeffer, 1848. It is very similar to A. lanipes, but a lot smaller (lanipes is really robust), and with the abdomen with black and white patches, whereas in lanipes the abdomen is always black. I checked some series of specimens that I have here and, I am pretty sure now of the ID. I have material from Argentina as well. In some specimens that coloration of the corium varies, but the original description says it is yellow with a “hairy” pronotum, which fits very nicely your photos.” Apiomerus flavipennis is known from Argentina and Southern Brazil only. 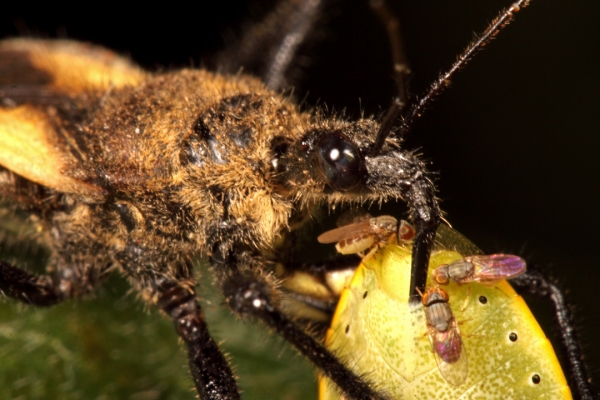 Quite unexpectedly, Dimitri also noted that at least some of the flies could belong to the family Milichiidae. He first became aware of these flies after seeing a photograph of Apiomerus showing something similar and suggested Milichiidae online as a possible source for more information. This remarkably informative  website by milichiid expert Irina Blake, who dubs species in the family as “freeloader flies”, is a model for how websites dealing with obscure insect taxa should be organized and populated (and features on the home page a great photo of ant-mugging flies taken by our favorite myrmecophile). At any rate, I forwarded my photos to Irina and within minutes received her response that the bigger black flies most probably represent the cosmopolitan Milichiella lacteipennis and the smaller flies a species of the family Chloropidae (of “dog pecker gnat” fame) in the subfamily Oscinellinae, noting that she has seen similar (or the same?) chloropids in other photos as well engaging in kleptoparasitism. 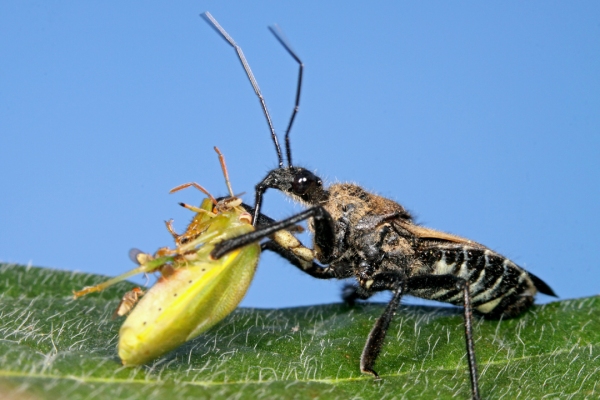 Not long after receiving the first reply from Dimitri, I got another message from him with a link to a very interesting paper by Eisner and colleagues (1991), who recorded freeloader flies in Florida preferentially attracted to stink bugs and leaf-footed bugs (family Coreidae) being preyed upon by the orb-weaving spider Nephila clavipes. Olfactory stimuli were already suspected to be involved in attraction of milichiids and also chloropids (Sivinski 1985); however, Eisner et al. (1991) experimentally demonstrated that milichiid attraction was tied to specific components of defensive sprays in several pentatomid and coreid species (including P. guildenii, the prey species in this series of photographs). The defensive sprays of the bugs were generally ineffective at preventing predation by the spiders (and apparently this is the case for A. lanipes and other reduviids as well), thus serving as a signal to milichiids and chloropids not only of the presence of a food source but perhaps also assisting search for mates in a density dependent fashion (Sivinsky 1985). Milichiid attraction to hymenopteran prey, richly endowed with integumental glands themselves, has also been documented; the Eisner study raises the question whether these types of prey are also detected from chemical cues.