In eastern North America, autumn is the beginning of the end for most insect groups. Preparations for winter are either complete or well underway—eggs have been laid, nests have been provisioned, and larvae (hopefully) have eaten well enough to endure the long, cold months that lie ahead. But for a few insects, fall is just a beginning. Triggered by cooler temperatures, shortened daylength, and invigorating rains, adults of these insects burst forth under crisp, blue skies to feed amongst a plethora of fall flowers or prey upon other late season insects before the advancing cold, finally, forces a close to the season. As a beetle man, my favorite fall insects must be the “fall tigers” (i.e., tiger beetles) that come out in force and zip across barren sand dunes or bask on exposed rocks of dolomite glades. My fall insect collecting focuses almost exclusively on these insects, since my other favorite groups (jewel beetles and longhorned beetles) are, for the most part, restricted in their adult activity to the spring and summer months and long gone by the time fall rolls around. There are, however, a few longhorned beetles that buck the normal spring/summer rule for the family, namely species in the genus Megacyllene. The most commonly encountered of these is Megacyllene robiniae (locust borer), and anyone who has examined goldenrod (genus Solidago) and its profuse blooms during the fall has likely encountered this familiar beetle with its narrow, alternating, zig-zag bands of black and yellow.¹ I have seen this species many times and in many places; however, I still always enjoy seeing it anew in the field each fall—perhaps as some sort of confirmation that the fall season truly has arrived.

¹ If you see a “locust borer” in the spring, it is actually the closely related Megacyllene caryae (hickory borer), while further west in the Great Plains during fall you might find Megacyllene comanchei.

Another species in the genus that is far less commonly encountered, however, is Megacyllene decora (amorpha borer). I have encountered this stunningly beautiful species in only a handful of locations in Missouri (MacRae 1994)—all where stands of its larval host plant, Amorpha fruticosa (false indigo), grow in association with goldenrod and snakeroot (genus Eupatorium). These sites are primarily in the big river valleys of the state (Missouri and Mississippi Rivers), although I have found at least one site in the prairies of west central Missouri. Earlier this summer while traveling through the southeastern lowlands of Missouri, I noticed a stand of native Hibiscus growing within a wet ditch along the edge of a small city park and stopped by to look for the even rarer Hibiscus-associated jewel beetle, Agrilus concinnus (MacRae & Nelson 2003, MacRae 2006). While I did not find that species, I did notice fairly good numbers of A. fruticosa plants along the edge of the ditch as well and young goldenrod plants that had not yet reached flowering stage. At that moment I knew I had a good potential site to look for M. decora and made a mental note to stop at the site again later in the season when goldenrod began to bloom.

The species is distinguished from related species in the eastern U.S. by its wide black and yellow bands.

Last week I returned to the site to find not only goldenrod in its earliest stages of bloom, but an even greater number of Eupatorium serotinum plants already in bloom. I wanted to photograph the beetle, of course, but what I was really hoping for was to find and photograph the beetle on the stems of its Amorpha host plant (I have only seen this once before—all other sightings of the beetle have been on flowers of goldenrod and snakeroot). I approached each Amorpha clump cautiously and searched the stems carefully, also keeping an eye on the goldenrod and snakeroot blooms as I moved from one clump to the next. After searching a number of clumps, I finally found the adult shown in these photos. Fortunately, I knew from previous experience in collecting these beetles that they are not a particularly wary species (few aposematically- or mimetically-colored beetle are), so I was able to get a number of good photographs before I (stupidly) bumped the beetle with the diffuser over my flash heads and disturbed it. 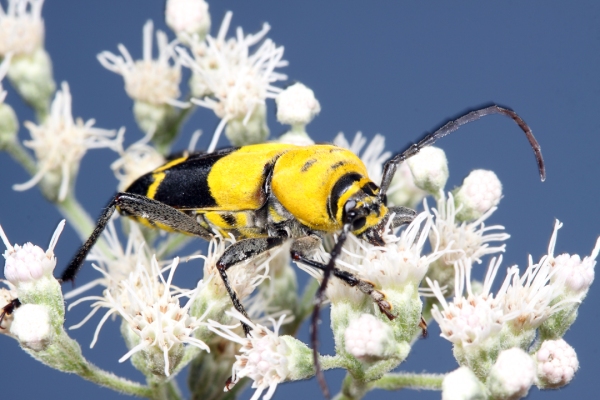 It would be another half hour before I would find a second beetle, and in total on the day I saw only three (all on Eupatorium). This and the very early stage of the goldenrod blooms suggests to me that the beetles were just beginning to emerge—over the next few weeks I am sure they will become more numerous at the site, so I may yet have an opportunity to photograph one on its larval host plant when I pass by the area in a couple of weeks. 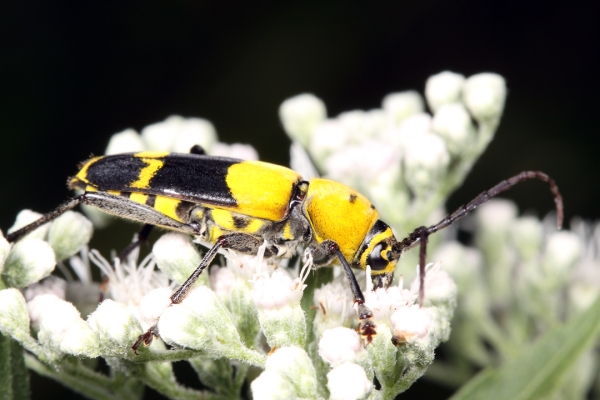 MacRae, T. C., and G. H. Nelson. 2003. Distributional and biological notes on Buprestidae (Coleoptera) in North and Central America and the West Indies, with validation of one species. The Coleopterists Bulletin 57(1):57–70.

10 Responses to A classic fall ‘bycid